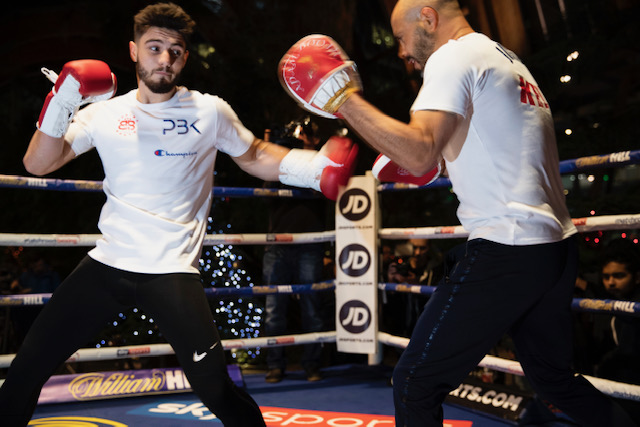 Josh Kelly says fighting at the Stadium of Light, home to his beloved Sunderland A.F.C, would be a dream come true as he prepares to make his ring return against unbeaten Pole Przemyslaw Runowski at The O2 in London on April 20, live on Sky Sports in the UK and DAZN in the US.

The North East sensation has fought in Newcastle twice since joining the professional ranks in 2016, blitzing Tom Whitfield in a round at the Walker Activity Dome and halting Kris George in seven at the Metro Radio Arena, but the ex-Sunderland Academy man wants nothing more than a Wearside homecoming.

“Fighting at the Stadium of Light would be out of this World,” said Kelly. “The Sunderland lads have always backed me throughout my career and I’d love to have an opportunity to repay their loyal support. They haven’t had much to shout about in recent times, so I’d love to put a smile back on their faces!

“Hopefully we can do something up there in the future. A World title fight in my home city would obviously be the dream and it’s something I’m striving for every day. When I was at the Sunderland Academy I always thought I’d play at the stadium one day, but to fight there for a World title would be even better.”

Despite being moved quickly by promoter Eddie Hearn and manager Adam Booth, ‘Pretty Boy’ knows there is a long way to go before serious World title talk, and the former Team GB star is fully-focused on the job at hand later this month.

“I’ve done my research on Runowski and he’s a solid opponent to test myself against, he’s unbeaten for a reason. They breed them tough in Eastern Europe, he looks very confident in himself. He’s strong and fit and he’s done a few ten rounders. I don’t expect him to come over here just to laydown.

“He’s going to keep on me while the fight lasts so I’ll have to keep my concentration and not switch off. I’m looking to dismantle him in style and put on a show to remind everyone what I’m about. This year is going to be massive if everything goes to plan. I’ve got to keep my feet firmly on the ground, continue to work and get the results.”

Kelly vs. Runowski is part of a huge night of boxing in the Capital.

Ilford Welterweight prospect Conor Benn (13-0, 9 KOs) makes his long-awaited return to the ring following a hand injury that has kept him out of action since his first title win over Cedrick Peynaud in July, Brooklyn Middleweight prospect Nikita Ababiy (3-0, 3 KOs) makes his UK debut and Watford Bantamweight Shannon Courtenay fighting for the second time after winning on her pro debut at the Copper Box Arena last month.