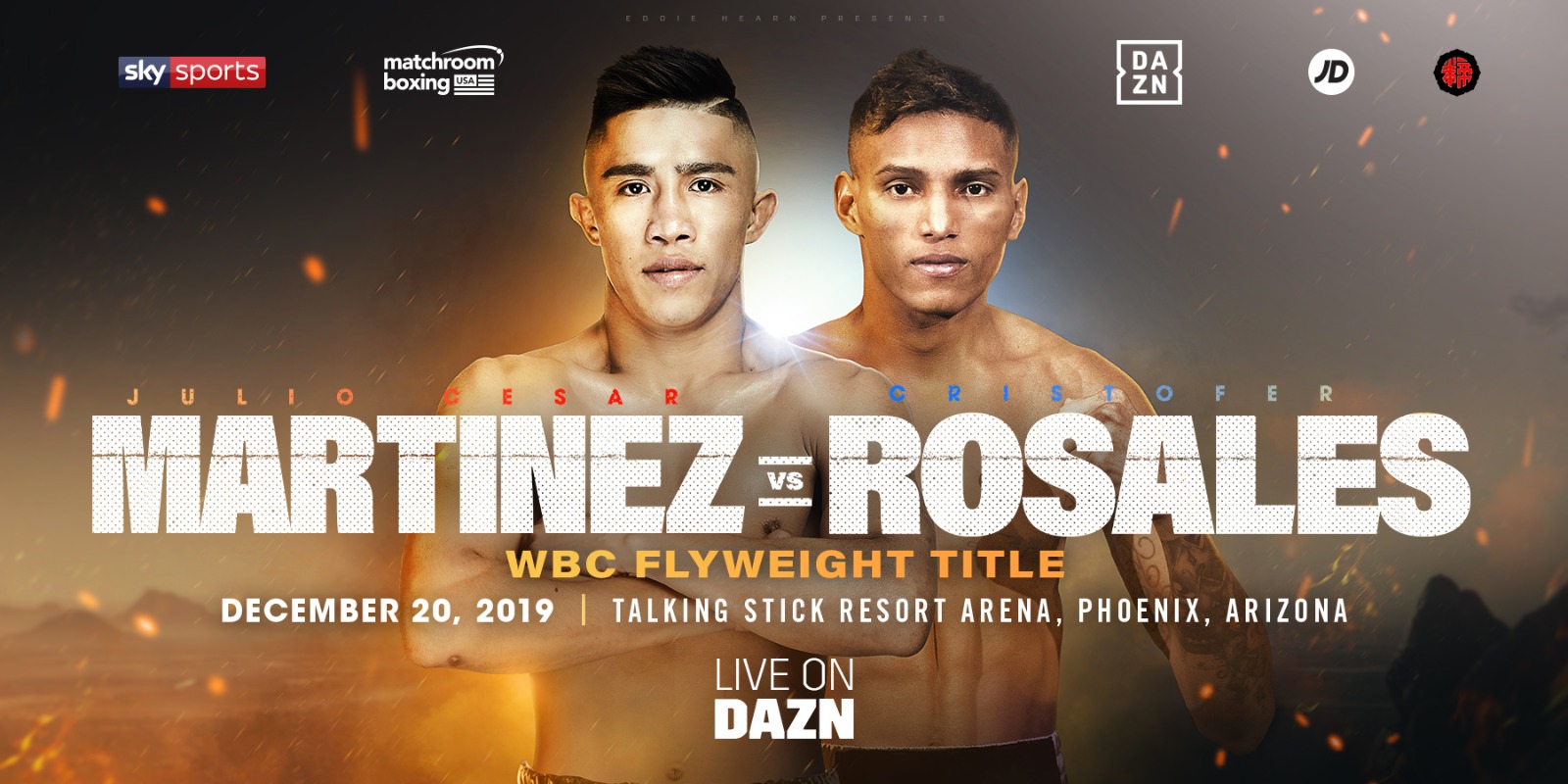 Martinez And Rosales Clash For World Crown In Phoenix

Vacant Flyweight strap on the line on December 20

Julio Cesar Martinez will challenge Cristofer Rosales for the vacant WBC World Flyweight title at the Talking Stick Resort Arena in Phoenix, Arizona on Friday December 20, live on DAZN in the US and on Sky Sports in the UK on the undercard of the Super-Middleweight blockbuster between Daniel Jacobs and Julio Cesar Chavez Jr.

TICKETS ARE ON SALE NOW STARTING FROM $25 (plus booking fee)

Martinez (14-1 11 KOs) aims to land the title at the second attempt following his controversial clash with former champion Charlie Edwards in London in August, where the Mexican had Edwards in serious trouble in the third round after sending the champion to the canvas, but Martinez landed a bodyshot while Edwards was on the deck and the subsequent KO win for Martinez was overturned in the ring to a no-contest.

Edwards vacated the title to move to Super-Flyweight opening the door for Martinez to land the crown and the 24 year old will be aiming to resume his remarkable streak of KO wins which was stretched to eight in March when he stopped talented Welshman Andrew Selby inside five rounds in Mexico.

Rosales (29-4 20 KOs) is aiming to regain the title that he won in April 2018 in Japan with a ninth round stoppage win over Daigo Higa, and successfully defended the title against Northern Irishman Paddy Barnes with a stoppage win in Belfast four months later before surrendering the belt to Edwards in London on points in December.

“We’re going to fight against a World champion,” said Martinez. “We know it’s dangerous, that he’s a very good fighter, but the whole team has had a great camp. We’re bringing the title back to Mexico”

“We’ve worked very hard to prepare for this fight,” added said Eddy Reynoso, Sport and Talent director at Canelo Promotions. “We have all the confidence in Martinez. He’s a fighter with lots of heart. A Mexican fight who’s coming strong. He’s coming to win this fight.”

“Martinez is a very strong fighter who like to fight going forward,” said Rosales. “He is also very focused and determined. I am confident to regain my title and bring it back to Nicaragua.

“First of all, I am thankful to God. I want to thank Matchroom Boxing USA, Teiken and my manager William Ramirez/Wram boxing, for all his hard work and efforts toward getting me this opportunity. I am prepared and ready. I will give everything I got and will fight against Martinez.”

“This is a great fight for a big night and a real opportunity for our latest signing Julio Cesar Martinez to shine on a huge stage,” said promoter Eddie Hearn. “Julio is an exciting talent and such a powerful puncher at 112lbs, we believe that he can dominate the division in 2020 – but Cristofer is a great fighter in his own right and will be determined to regain his title; there will be fireworks in this one.”