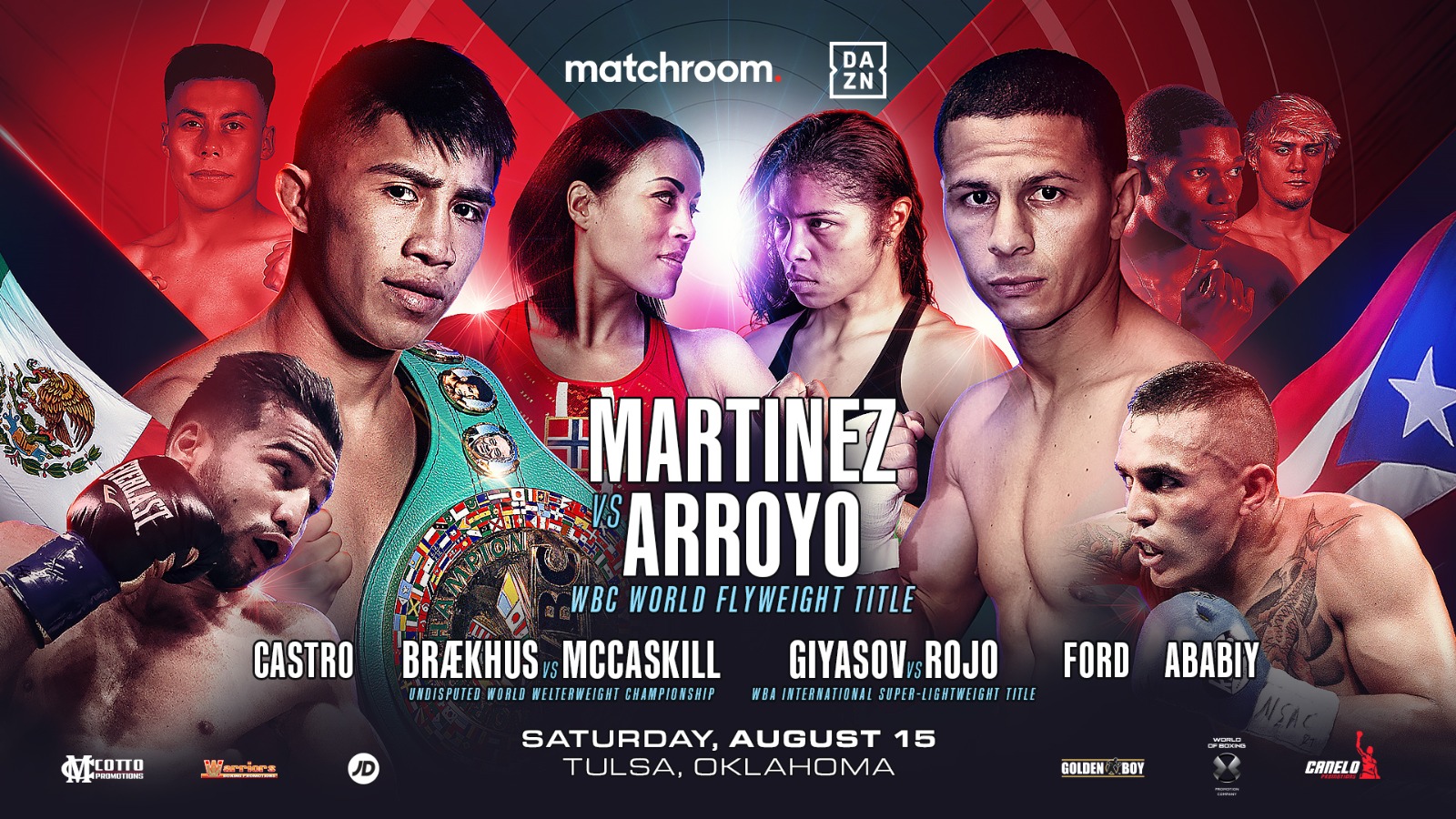 Julio Cesar Martinez will defend his WBC World Flyweight title against #1 ranked McWilliams Arroyo as Eddie Hearn’s Matchroom Boxing USA return to action in Tulsa, Oklahoma on Saturday August 15, exclusively live on DAZN in the US.

Martinez (16-1 12 KOs) makes the second defense of his crown against Arroyo, in a main event brought to you in association with Canelo Promotions, Golden Boy Promotions and Miguel Cotto Promotions, having thrilled Texas with his first defense of the belt in Matchroom Boxing’s last show before the COVID-19 pandemic in February, coming out on top of an enthralling 12 round battle with Welshman Jay Harris.

The 25 year old Mexican landed the title with a ninth round KO win in a ferocious clash with former champion Cristofer Rosales, and the champion is honored to be topping the return of Hearn’s outfit in the States as he looks to cement his place in the division and move towards unification battles.

“I am so happy to be back in the ring again and I promise you another war on August 15,” said Martinez. “With the unification fights ahead of me, it is important to take care of my mandatory challengers and I expect a tough fight with Arroyo. I believe 2020 and 2021 will see me unify and become undisputed and I can’t wait put a smile back on boxing fans faces.”

Arroyo (20-4 15 KOs) challenges for a 112lb World title for the third time in his career as he looks to finally get a World strap around his waist. The decorated Puerto Rican amateur was edged out via split decision by IBF champion Amnat Ruenroeng in September 2014 and then fell to pound-for -pound star Roman ‘Chocolatito’ Gonzalez in April 2016 for the WBC and Ring Magazine crowns in California.

The 34 year old ranked at number one in the WBC enters the bout on the back of three wins in 2019 having returned to Flyweight from a brief stint at Super-Fly, and the former World Amateur Champion is determined to end the talented Mexican’s reign in Tulsa.

“I am very happy with this opportunity that my promoters Miguel Cotto Promotions, H2 Entertainment and Golden Boy Promotions have given me since I am ranked number #1 in the WBC and I am following my dream of becoming a World champion,” said Arroyo.

“I think Julio Cesar Martinez is a great champion the fans will see a fight full of action due to the styles of both of us. It is very good for boxing Puerto Rico vs. Mexico and I am eager to take the belt”

Prior to the lockdown, Cecilia Brækhus was set to defend her undisputed Welterweight championship in Maryland against Jessica McCaskill, and that fight is the co-main feature in Tulsa.

Brækhus (36-0 9 KOs) has dominated the Welterweight division for 11 years and victory over McCaskill would see the Norwegian sensation break Joe Louis’ record of 25 consecutive World title defenses, with the 38 year old’s record stretching back to her first World title fight in her 11thpro outing in March 2009.

‘The First Lady’ still holds the same ambitions from when she first became a World ruler, and with a long camp behind her in Big Bear, California with new trainer Abel Sanchez, Brækhus is itching to get back into action and defend her belts in style.

“Finally we have a new fight date and I cannot wait to return to battle,” said Brækhus. “It’s been an extended camp in Big Bear with my new trainer Abel Sanchez and I’m very excited to defend my world titles against Jessica on August 15. I know how tough of a fight this is and will be well prepared for victory.

“Thanks very much to Abel, the Matchroom Boxing Team and Tom Loeffler for all of their support during these unique times. And to my fans in Norway, the United States and all over the world, thanks so much for continuing to inspire me, I hear you loud and clear.”

It’s fitting that McCaskill (8-2 3 KOs) marks the return of Matchroom Boxing USA on DAZN from the lockdown as the Chicago ace won her WBC World Super-Lightweight title in Hearn’s first ever show on the groundbreaking streaming network in America in her hometown in October 2018 against Erica Farias.

‘CasKILLA’ went on to unify the division by taking the WBA crown from Farias fellow Argentine Anahi Sanchez in May 2019 in Maryland before putting both belts on the line in a rematch with Farias in her Windy City home, edging out her old foe via majority decision.

The 35 year old now meets the Norwegian superstar for the undisputed title in just her 11th fight, and McCaskill is determined to keep her fairytale story going and end Braekhus supremacy.

“I’m just looking to make history and shock the world as I usually do every time,” said McCaskill. “I’m expecting to knock out Cecilia. I don’t know what round, but this extra time we’ve got to train before the fight is definitely going to make us a lot sharper and a lot stronger and smarter overall.

“I’ve been in the gym every day for multiple workouts and I can’t wait to show what we’ve been working on.”

Shakhram Giyasov continues to rise up the Super-Lightweight rankings and the Uzbekistan talent – one of three from the emerging boxing powerhouse under the spotlight in Matchroom Boxing’s latest YouTube feature – and he defends his WBA International Super-Lightweight title against Francisco Rojo.
Giyasov (9-0 7 KOs) picked up the strap he defends in Tulsa in April 2019 with victory over Emanuel Taylor in California, and in his first defense certainly saw the boxing world stand up and take notice as he obliterated former World champion Darleys Perez inside 30 seconds of the fight.

The highly decorated amateur is ranked at number seven in the WBA and a second successful defense of his belt would move him into a great position to land a shot at the World title in the future.

“I’m very excited to defend my title on August 15 against Francisco Rojo,” said Giyasov. “I know how tough of a fight this is and have already started training with Coach Diaz in Southern California to prepare for victory.

“Huge thanks to my team at World of Boxing and Vadim Kornilov along with Matchroom Boxing and DAZN for this tremendous opportunity.”

Rojo (22-3 15 KOs) returns to action following a brief spell on the sidelines and looking to spoil Giyasov’s rise. The Mexican has a wealth of experience from his 25 fight pro career, and the 29 year old is confident of causing an upset against the 26 year old.

“What a wonderful opportunity,” said Rojo. “My gym is now open and I will be well prepared. I showed American fans I could fight when I fought Ryan Martin in Las Vegas and I’ll remind them again when I beat Giyasov.”

Three of Hearn’s talented youngster’s complete the line-up, and it promises to be a memorable night for amateur standout Marc Castro as he makes his pro debut alongside rising starlets Nikita Ababiy and Raymond Ford.

Hearn beat off fierce competition to ink a deal with Castro, with the 20 year old turning over with an amateur record of 177 wins and 7 losses with a stellar 48-1 record in international and national competition, and in addition to being a two-time Amateur World Champion, Castro is a 16-time National Champion, three-time National Silver Gloves champion, and two-time National Junior Olympics Champion.

“I’m excited so start my professional journey to becoming a World champion,” said Castro. “The extra time has just made me even hungrier to get my career going and I cannot wait to showcase what I will bring to the pro game.”

Ababiy (8-0 6 KOs) fights for the ninth time in the paid ranks and for the first time since a controversial DQ win over Jonathan Baptista at the Staples Center in Los Angeles gave ‘White Chocolate’ a sixth win inside the distance since turning pro as one of Hearn’s first US signings in October 2018.

“I’m excited to light up that ring, it’s been way too long,” said Ababiy. “I’ve been working hard behind the scenes and I will be looking to steal the show on August 16 – White Chocolate is back!”

Ford (5-0 2 KOs) will taste his sixth action as a pro and for the ‘Savage’, it’s a chance to unleash the frustrations of two-thirds of a year on the sidelines since the 21 year old from Camden, New Jersey recorded his second win inside the distance from his five pro fights to date in Phoenix in December 2019.

“Due to injuries and this pandemic it will be eight months before I fight again,” said Ford. “It feels great to finally get back in the ring. It’s been hard during the pandemic, but I used this time to work on my craft and it made me go harder in the gym. On August 15 I will show the world why I’m the BEST prospect in boxing.”

The announcement of Hearn’s return to boxing in the States comes hot on the heels of the promoter releasing details of four stacked and ultra-competitive fight cards in Britain over four weeks in the unique setting of the grounds of the company’s Essex headquarters.

Hearn is following that bold move with more ambitious plans for his American return, with the elite-level bill set to have a unique setting in Tulsa unveiled soon.

“We are ready to return in the States and just like Fight Camp in the UK, we plan to do things differently,” said Hearn. “We are heading outdoors in Tulsa, Oklahoma and we’re planning something unique and special for this double World championship header that should both thrill in the ring.

“Julio Cesar Martinez is a beast and one of the most exciting World champions in boxing. It’s Mexico v Puerto Rio as he faces mandatory challenger McWilliams Arroyo in a guaranteed thriller. In the co-main event, we stage the Undisputed Welterweight championship between Cecilia and Jessica which promises to be an electric pace between two great champions.

“Beneath them, ‘Wonder Boy’ Shakhram Giyasov steps up the gears as he homes in on a 140lbs World title shot and US amateur sensation Marc Castro makes his professional debut. Rising US stars Nikita Ababiy and Raymond Ford step up the opposition as they continue their rise to the top.”