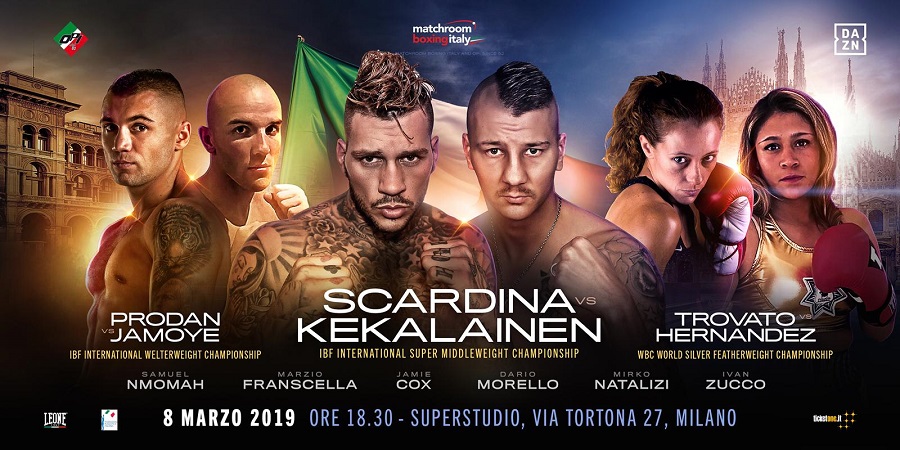 Matchroom Boxing Italy And Opi Since 82 Head To Milan

Matchroom Boxing Italy, Opi Since 82 and DAZN are delighted to announce the second instalment of their historic eight-year joint venture in Italy.

Following the huge success of their inaugural event at the Teatro Obi Hall in Florence in November, the trio will host a night of Championship Boxing at the Superstudio in Milan on March 8, shown live on DAZN.

As part of the landmark partnership, Matchroom Boxing Italy, Opi Since 82 and DAZN are determined to rebuild boxing in the country and inspire a new generation of fighters by showcasing the best up-and-coming talent.

Swindon’s former World title challenger Jamie Cox (25-2, 14 KO’s) fights in Italy for the first time as he aims to get his career back on track following defeats to George Groves and John Ryder.

Ticket details will be announced soon.

“I’m excited to promote our first show in Milan,” said Eddie Hearn, Matchroom Boxing Managing Director. “It’s a stacked card full of exciting match ups with the hugely popular and exciting Daniele Scardina topping the card. We had a great start in Florence and we expect another sold out Arena in Milan.”

Salvatore Cherchi of OPI Since 82 said: “After a successful night in Florence we are back in Milan with the second show of the partnership with Matchroom Boxing Italy and DAZN. Milan has a very important boxing tradition and in the last four years we kept it alive promoting 28 shows at Teatro Principe. We are Looking forward to a great night of boxing on March 8.”

“We are very happy to bring boxing back to Milan, a city that includes sports among its greatest excellences, especially within a unique location that has always been linked to great international fashion and design events that animate the city every year,” says Veronica Diquattro, Executive Vice President Italy – DAZN. “Together with our partners, the goal is to reawake the excitement and interest around boxing in Italy, trying to bring more people close to this sport.”