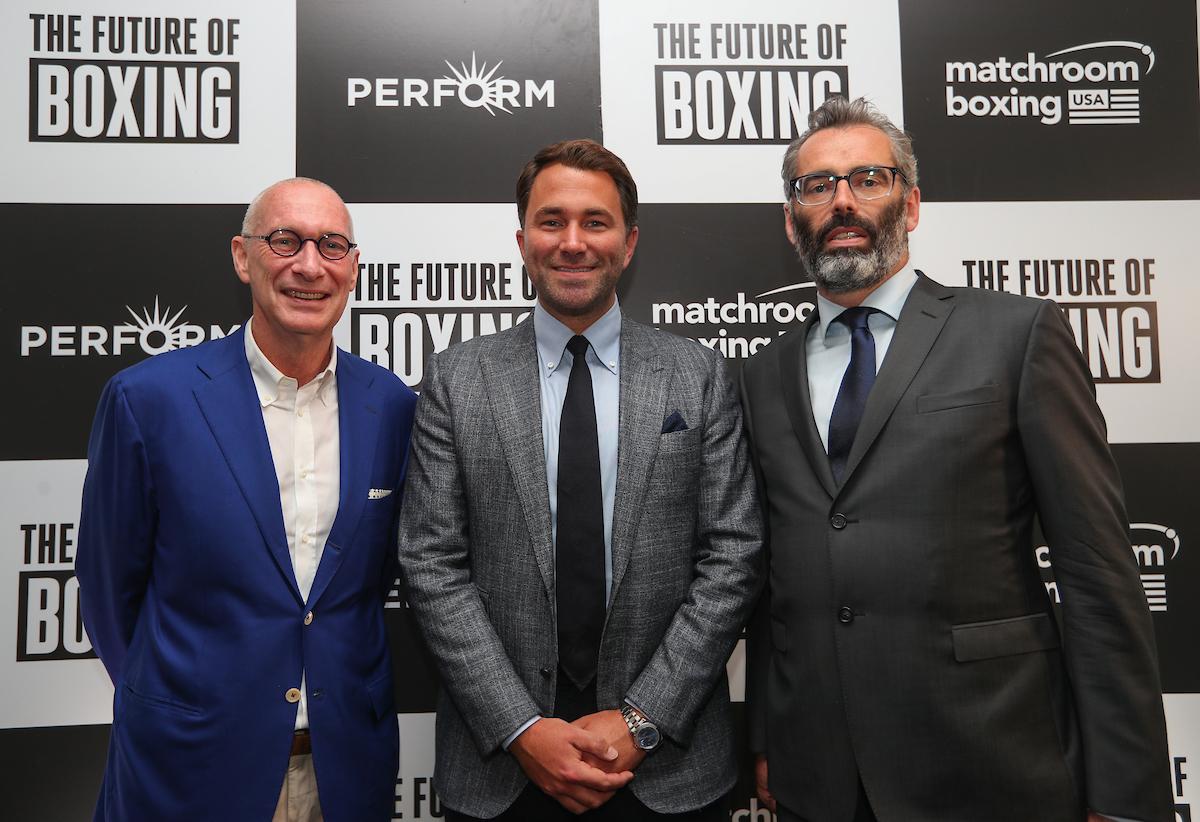 Matchroom Boxing, a world leading boxing promoter, and Perform Group, the digital leader in global sports media, have today announced the creation of a landmark $1billion joint venture and the biggest-ever deal in boxing.

The historic eight-year $1billion deal will see the joint venture, Matchroom Boxing USA, stage 16 fights a year featuring some of the sport’s biggest stars at the best venues across America. Perform Group’s live and on-demand streaming service, DAZN, will be the exclusive US broadcast partner for the 16 US fight nights plus Matchroom’s existing 16 fight nights in the UK. This iconic investment in the fights, talent, content, and promotion of boxing will reignite fans’ passion for the sport and engage a new generation of fight fans.

Eddie Hearn, Managing Director of Matchroom Boxing, and Simon Denyer, CEO of Perform Group, announced the joint venture at a press conference in New York. The two companies have brokered the industry-first deal so that fans can see the fights how and when they want to, anytime and anywhere.

Eddie Hearn said: “This is a historic moment for Matchroom and the sport of boxing. Since our expansion to the US, we have been looking for a partner that shares our vision and that can give us the volume of dates and rights fees required to build the strongest stable in world boxing and take it to a new level.

“This is a dream scenario for us, we can build a formidable team of fighters and also put our stamp on events from production to talent to in arena experience. Our plan is to make DAZN the home of boxing and with 32 big fight nights already confirmed from the US and UK we are nicely on our way.

“America – we have well and truly arrived, let the fun begin!”

Simon Denyer, CEO of Perform Group, said: “Perform Group has a rich history of long term strategic partnerships with the best rights holders in world. I’m excited about working with Matchroom; we share the same passion and vision for reigniting boxing in the US and it’s time for DAZN to provide an exciting new platform for these great events. It’s a better deal for everyone – especially fight fans.”

John Skipper, who on Monday joined Perform Group as Executive Chairman said: “DAZN has already proven itself in Japan, Germany and Canada as the best platform for delivering great live sport to passionate fans. It’s time to bring DAZN to America and the amazing events we have planned with Matchroom is a great place to start”.

The two British businesses, which have worked closely together for over 10 years, are partnering on this joint venture to be the change the US boxing world needs. None of the fight nights will be on PPV, all will be available for one monthly fee and no long term contract.

Matchroom Boxing, which has sold over one million tickets to fights in the last five years through its promotion of boxing, has raised the profile of the sport in the UK to attract sell-out crowds of 90,000 fans.

Matchroom Boxing will stage 16 fights in the UK over the next year which will also be available for US fans to stream on DAZN, anytime and anywhere.

Perform Group is changing the world of sport for fans. Backed by Access Industries, the company believes that more should be done to elevate fans’ experience of boxing no matter how, when or where they enjoy it.