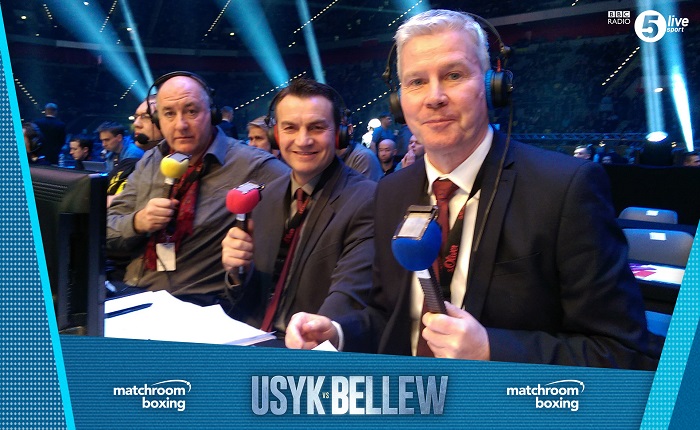 Matchroom Boxing are delighted to announce a deal with the BBC for exclusive radio rights to the highly-anticipated undisputed Cruiserweight World title showdown between Oleksandr Usyk and Tony Bellew at Manchester Arena this Saturday.

Award-winning boxing correspondent Mike Costello and his team will provide blow-by-blow commentary on an historic night in Manchester as pound-for-pound star Usyk puts his WBC, IBF, WBA, WBO and Ring Magazine belts on the line against Bellew.

The 31-year-old won Olympic, World and European amateur golds before steamrolling his way to the top of the Cruiserweight division after only 15 fights, but former WBC World Champion Bellew believes he will become the first man to beat Usyk this Saturday.

A glittering career has seen Bellew win British, Commonwealth, European and World titles, and the Liverpudlian warrior is aiming for a fairytale ending in Manchester, hinting that this could be his final battle before he retires.

Matchroom Boxing Managing Director Eddie Hearn, said: “I’m delighted to team up with BBC Radio 5 Live for this mega fight on Saturday. This is the first ever four belt undisputed clash in British boxing history and I know the 5 live team will bring you all the fight week build up in style along with a first-class delivery on the night encapsulating all of Saturday night’s drama.”

Ben Gallop, Head of BBC Radio Sport and Digital, said: “I’m delighted BBC Radio 5 Live will be broadcasting live radio commentary of Oleksandr Usyk vs. Tony Bellew on Saturday. We are committed to bringing our listeners the biggest fights and with exclusive coverage on BBC Radio 5 live and the BBC Sport website, boxing fans won’t miss a moment of the action.”