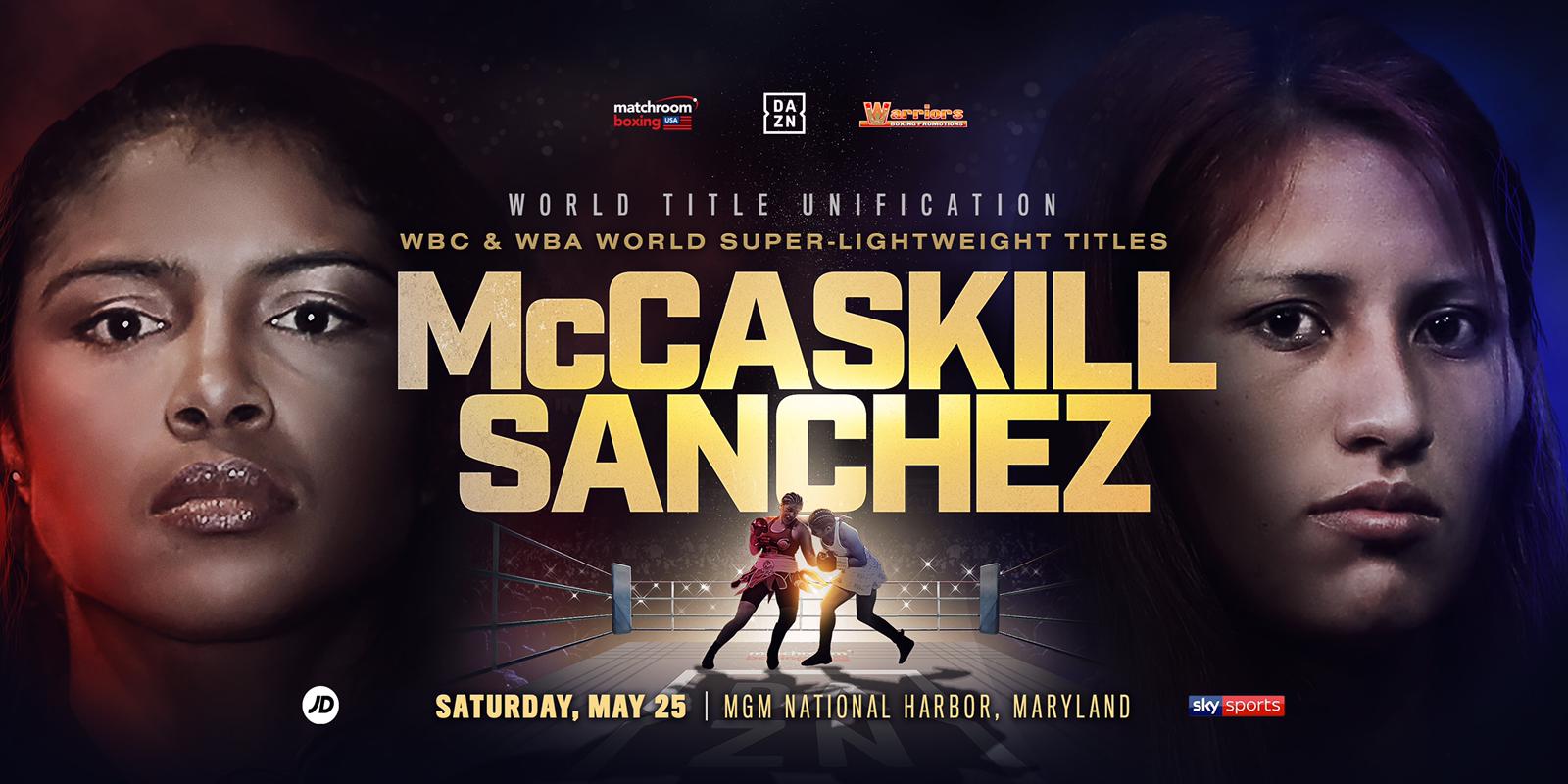 Mccaskill Aims To Unify Against Sanchez In Maryland

Jessica McCaskill is aiming to unify the Super-Lightweight division when she faces Anahi Sanchez on Saturday May 25 at the MGM National Harbor in Oxon Hill, Maryland, live on DAZN in the US and on Sky Sports in the UK.

McCaskill (6-2 3KOs) became World champion in the first Matchroom Boxing USA show on American soil on DAZN in October, ripping the title from Erica Farias to land the crown in just her eighth pro outing in her hometown of Chicago.

Sanchez (19-3 11KOs) became a four-weight World champion in April by stopping Diana Ayala in the opening round to claim the title on her Pergamino, Argentina stomping ground. The impressive 27 year old moved up to 140lbs after challenging Katie Taylor in October 2017 for the vacant WBA Lightweight title, with McCaskill then being the first defense for the Irish great in December 2017.

McCaskill and Sanchez can take the first step on the road to becoming the undisputed champion in a fight in association with Warriors Boxing, and the 34 year old CasKILLA cannot wait to test herself against the Argentine.

“I’m very excited to be working with Eddie Hearn and DAZN,” said McCaskill. “We want to be involved in the BIG fights! My team and I are ready to make history and change the game in women’s boxing.

“I know that this is going to be a tough fight but this is what I am in the sport for. Erica is a top fighter, but I feel in great shape and in a great frame of mind, and I cannot wait for May 25.”

“This is a huge fight and one I am so excited for,” said Sanchez. “Jessica put in a great performance winning her World title and I expect a really tough fight on May 25.

“I think that I have the edge in terms of experience having boxed for World titles many times, but I know that Jessica is on the rise and will be motivated for this fight so I expect a really hard night.”

“I am delighted to see Jessica McCaskill get this chance to unify the WBC and WBA titles,” said promoter Eddie Hearn. “Jessica’s win in Chicago was such a fantastic moment for Jessica, her team and Chicago – and she raring to go for May 25.

“It’s a tough night ahead though as Anahi Sanchez is a quality operator that has bags of experience at the top level – with more World title fights than Jessica has had fights – so it promises to be yet another great Women’s World title fight live on DAZN.”

McCaskill and Sanchez clash on the undercard of pound-for-pound star Oleksandr Usyk as the Ukrainian moves up to Heavyweight after dominating the Cruiserweight division, and takes on former World title challenger Carlos Takam with rising Heavyweight Croatian talent Filip Hrgovic taking on Gregory Corbin on his US debut.