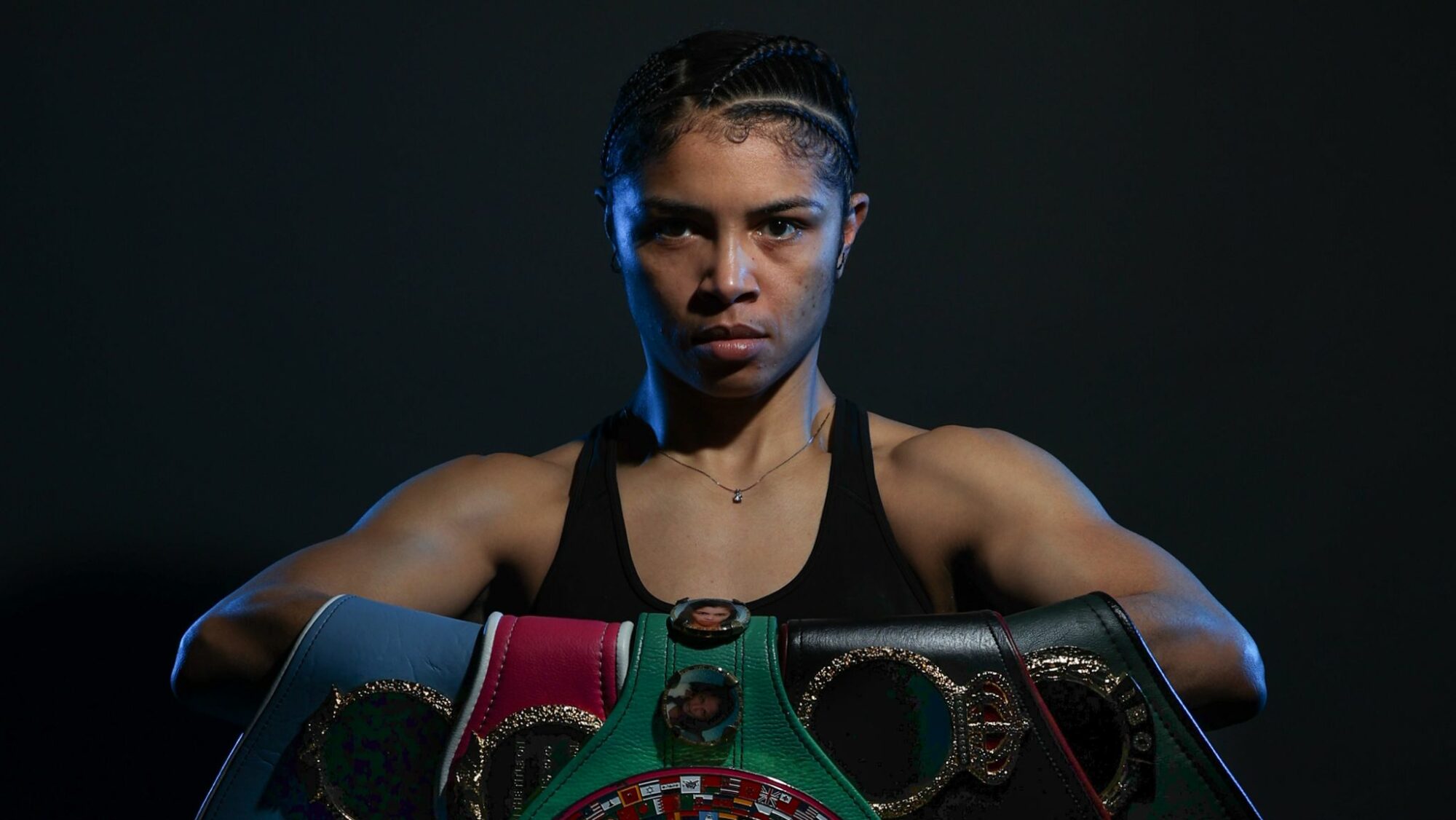 Jessica McCaskill has signed a long-term promotional deal with Matchroom Boxing and Eddie Hearn – and will defend her undisputed Welterweight title against Victoria Bustos at the MGM Grand Garden Arena in Las Vegas on Saturday December 4, live worldwide on DAZN.

Tickets starting at $58 (plus fees) go are on sale NOW!

McCaskill (10-2 3 KOs) successfully defended the Welterweight straps that she ripped from Cecilia Brækhus in a rematch with the Norwegian in March in Dallas, having handed Brækhus her first career defeat on the street in Tulsa, Oklahoma in August 2020.

‘CasKILLA’ became a two-weight ruler against Brækhus, having previously been unified at Super-Lightweight having beaten WBC champion Erica Farias in October 2018, adding the WBA strap in May 2019 against Anahi Sanchez and then successfully defending the belts in a rematch with Farias in October 2019.

The Chicago star now puts her 147lbs belts on the line against fellow two-weight champion Bustos, and it’s a second attempt for the Argentine to become a three-weight champion after she challenged Brækhus for the belts in November 2019.

Matchroom gave me a shot on the big stage, and I want to finish my career them - I’m excited!

“Matchroom gave me a shot on the big stage, and I want to finish my career them – I’m excited!” said McCaskill. “We have a tough test in front of us in Victoria, she’s a great fighter and she’s been in with everyone, but I am confident I will keep my belts and we’ll move on to more great fights in 2022.”

“I am happy we worked out a deal,” said trainer and manager Rick Ramos. “Eddie Hearn and Matchroom have been good to us. I want to continue doing business with them. I’m happy and I’m excited! Let’s work!”

“Jessica has been a revelation since she travelled to the UK to face Katie Taylor in December 2017,” said promoter Eddie Hearn. “She’s stepped up to face all-comers and with grit, determination and skill she’s a two-weight World champion – and she’s not done yet. There are plenty of big fights out there for Jess, starting in Las Vegas against Victoria who always lays it all on the line when she fights.”

Th 29-year-old from Zagreb returns to action following a one-sided beat down of Marko Radonjic on September 10 at the Worthersee Stadium in Klagenfurt, Austria. With an IBF Final Eliminator in the works for 2022, Hrgović knows he cannot afford any slip ups as he looks to extend his unbeaten run against the 32-year-old LA-native Alexander, who has previously gone the distance with Heavyweight contenders Carlos Negron and Travis Kaufmann.

“I’m looking forward to getting back in the ring and fighting on a big show in Las Vegas,” said Hrgović. “I’ve always wanted to box in Las Vegas where so many great Heavyweight champions have fought before. My opponent Scott Alexander is a tough fighter, but I have been training hard and will be ready to give the fans another great performance on December 11.”

“Watch out Las Vegas, ‘El Animal’ is coming,” said promoter Kalle Sauerland. “We’re delighted to be working with Eddie Hearn and Matchroom Boxing to deliver Filip this fantastic opportunity to fight in Las Vegas as part of a huge event at the MGM Grand Garden Arena. This is a chance for Filip to end the year on a high before shifting his focus to World Titles in 2022.”

One of Matchroom’s newest American stars fights for the first time with Eddie Hearn, as Montana Love takes on Carlos Diaz.

Love (16-0-1 8 KOs) penned his deal with Hearn after his impressive showing in Cleveland in August, where he forced former World champion Ivan Baranchyk after seven exciting rounds. The 26 year old is hunting down big fights in 2022, but Diaz (29-1 14 KOs) will be looking to spoil his Matchroom bow.

“I’m excited for my debut with Matchroom and DAZN December 4,” said Love. “Too Pretty taking his throne, this my shit now.”

There’s a welcome return to the ring for talented Middleweight Austin ‘Ammo’ Williams as he faces Quatavious Cash. Williams (8-0 6 KOs) last tasted action in March on the undercard, outpointing experienced campaigner Denis Douglin over eight rounds, and he’ll meet Cash (14-2 8 KOs) over that distance in his ninth pro-outing and first as a pro in Las Vegas.

Alexis Espino (9-0 6 KOs) is in action for the tenth time in the paid ranks as he takes on Rodolfo Gomez Jr. in the first eight round fight of his pro career, and Marc Castro(4-0 4 KOs) is out to make it five KOs from five pro fights, with his opponent to be named soon.

“This is a stacked card to close our year in the States,” said Hearn. “Filip is knocking loudly on the door of his fellow World class operators in the Heavyweight division, and next year we expect him to break that door down and be involved in – and win – some massive fights.

“Montana Love is a great character and a serious contender, and I am looking forward to him beginning his journey with us in Vegas. It’s great to have Ammo back doing what he does best and Alexis and Marc are two future superstars that continue to impress on their pro journeys.”