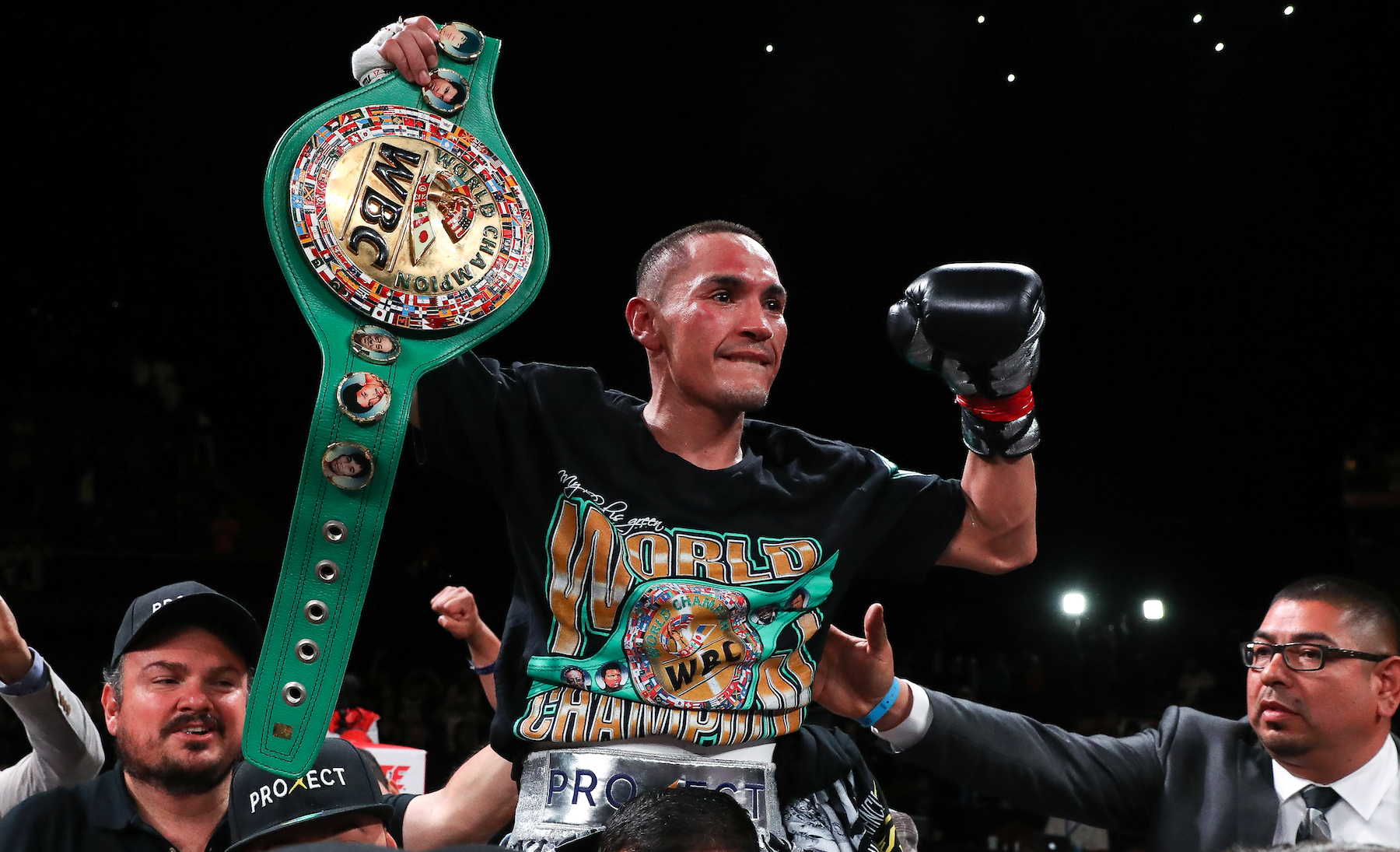 Matchroom return to Mexico on Friday October 23 at TV Azteca Studios in Mexico City with a World title triple-header led by champions Juan Francisco Estrada, Román ‘Chocolatito’ González and Julio Cesar Martinez, live on DAZN in the US and on TV Azteca in Mexico, on a huge fight night brought to you by Eddie Hearn’s Matchroom Boxing with Zanfer Promotions.

Juan Francisco Estrada (40-3 27 KOs) will defend his WBC and Ring Magazine World Super-Flyweight titles in a rematch with Carlos Cuadras. Estrada makes the second defense of the belts having stopped Dewayne Beamon in nine rounds of action in Hermosillo in Mexico in August 2019, four months after ripping the belts from Srisaket Sor Rungvisai with a brilliant performance in their rematch in Los Angeles.

Victory in Mexico City for both Estrada and Chocolatito could lead to a rematch between the pair eight years after Chocolatito won their first meeting, but Cuadras has other ideas.

Estrada and Cuadras tangled for the first time in September 2017 in an ultra-competitive showdown, where an 11th round knockdown by Estrada proved decisive in all three judges awarding him the fight by a solitary point. Cuadras (39-3-1 27 KOs) enters the bout with three wins on the spin and the 32 year old will be putting it all on the line to become a two-time WBC champion at Super-Flyweight.

We are going to share the show Chocolatito and I and if everything goes well, we hope to see each other again soon.

“I am excited to return to the ring,” said Estrada. “it has been tough months for the whole world and we want to give a great show to all the fans of this sport.

“The first fight against Cuadras was a good fight, without a doubt this will be too. Also, we are going to share the show Chocolatito and I and if everything goes well, we hope to see each other again soon.”

“I am going to correct the mistakes that were made in the first fight against Gallo to go out with my hand up in this new opportunity that is being presented to me,” said Cuadras. “I want to show that I am one of the best in this division.”

Chocolatito (49-2 41 KOs) is back at the summit of the sport after rolling back the years with a vintage win over Kal Yafai in February. The Nicaraguan ace stopped the unbeaten Briton in the ninth round in Dallas to become a World Super-Flyweight champion for the second time, and the four weight World ruler will defend the WBA belt he ripped from Yafai and aim to set up another clash with Estrada against a former Yafai victim, Israel Gonzalez.

Gonzalez (25-3 11 KOs) ran Yafai close for the WBA crown in Monte Carlo in November 2018 and his clash with Chocolatito will be his third World title shot having challenged Jerwin Ancajas for the IBF strap in February 2018.

“I want to thank God for giving me the strength to endure the sport I love and defend my World title,” said Chocolatito. “I want to thank Eddie Hearn and Matchroom Boxing as well as my family of Teiken. I also want to thank all my fans, specially my Mexican friends and Zanfer promotions for giving me this great opportunity, it is truly a blessing to fight in Mexico and I am ready to give my all on October 23.”

“It’s a goal of mine beating Chocolatito especially when the fight is in Mexico,” said Gonzalez. “I feel the compromise of giving a great fight for the fans and for every mexican fighter that have fought for a World title.”

The third World title fight on the bill sees a welcome return to the ring for one of boxing’s most exciting rising stars as Julio Cesar Martinez puts his WBC World Flyweight strap on the line against IBO champion Maximino Flores.

Martinez (16-1 12 KOs) is becoming a must-see attraction in the sport with his all-action style and ferocious power, and the 25 year old Mexican puts his belt on the line for the second time since beating Cristofer Rosales inside nine rounds in December, and seeing off the spirited challenge of Jay Harris in Dallas in February.

Flores (25-4-2 17 KOs) landed the vacant IBO crown in August with victory on hostile territory over Carlo Penalosa in the Philippines, and the 29 year old can add another title straight away with victory in this all-Mexican bout.

“I’ve been preparing very well here with my trainer Mauricio Aceves,” said Martinez. “We’re having a very strong camp. Thank God that I’ve still been able to work out throughout the pandemic. Either my trainer comes to my house or I go to his. Either way I haven’t lost my conditioning.

“Thank God I haven’t been directly affected by the Pandemic. I’ve been able to remain active with running and practical skills with the help of Mauricio. We’re just here putting the final touches on my training but I’m very confident that my trainer has me in the best shape for this upcoming fight”

“The whole world will know my name when I beat Martinez,” said Flores. “It is a unique opportunity in my career, and I have to take advantage of it, all my life I have prepared for this moment”.

“I can’t wait for our return to Mexico with this triple-header of World title action,” said promoter Eddie Hearn. “Three of the very best World champions are in action and in real tests for their crowns.

“A rematch between Juan Francisco Estrada and Chocolatito is a done deal for the first quarter of 2021 but they both have hard fights ahead. Estrada’s first fight with Carlos Cuadras’ was nip and tuck war, and Carlos is full of confidence that he’ll get a big victory this time.

“Chocolatito was outstanding in beating Brit Kal Yafai in Dallas, and the former pound-for-pound king has a new lease of life as he chases more belts – but must be at his best against his Mexican namesake aiming for third time lucky in his hunt for a World title.

“Julio Cesar Martinez is one of the most thrilling World champions out there right now and I can’t wait to see him back in action. The firecracker Mexican guarantees excitement, and with Maximino Flores having a high KO percentage himself and coming in after landing the IBO belt, this will catch fire straight away.

“Three incredibly talented youngsters are back in the ring on the night in Diego, Ammo and OJIII – it’s a stacked night of action and one not to be missed!”

“We are going to give the fans a high-quality card as they always deserve it,” said Fernando Beltran from Zanfer Promotions. “Very interesting fights with great sports idols who always leave everything in the ring.”

Matchroom’s third ever show in Mexico is part of a blockbuster month for Eddie Hearn’s promotional outfit on both sides of the pond, starting with the return to action of Olympic bronze medal man Joshua Buatsi taking on Marko Calic on October 4 on a stacked card that sees Chantelle Cameron fight for World title honors for the first time as she meets Arianna Dos Santos Araujo for the vacant WBC Super-Lightweight strap. Newcastle’s fan favorite Lewis Ritson then takes center stage as he takes on Miguel Vazquez on October 17 and there’s more top-class World title action on that card too as Savannah Marshall faces Hannah Rankin for the vacant WBO World Middleweight strap.

Matchroom close the month in spectacular fashion on October 31, as Ukrainian pound-for-pound star Oleksandr Usyk faces a massive test of his Heavyweight credentials as he does battle with British favourite Derek Chisora.