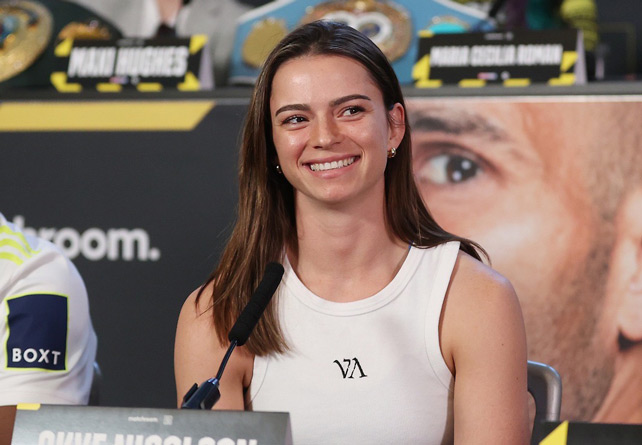 Skye Nicolson will become the first Australian female to step through the ropes at Madison Square Garden when she fights on the undercard of the historic clash between Katie Taylor and Amanda Serrano on Saturday April 30 in New York, live worldwide on DAZN.

Nicolson (2-0) returns to the States for her third pro-outing after making her debut in San Diego at the start of March and then making it two wins from two in Leeds at the end of the month.

The Australian, who won Commonwealth Gold in 2018 and represented her country at the 2020 Olympics, joins an all-star cast on April 30 in the Big Apple, and makes her own piece of history on a night where Taylor and Serrano, the pound-for-pound #1 and #2 fighters of the world is one that will not only make boxing history, but women’s sports history. MSG has hosted thousands of fights through its illustrious years, beginning more than a century ago on July 17, 1882; now, 140 years later, this matchup finally marks the very first time two female fighters are headlining a combat sports event at ‘The World’s Most Famous Arena’.

The 26 year old southpaw will face Shanecqua Paisley Davis (3-1) over six rounds, and with the main event shining the brightest of lights on the rise of women’s boxing, Nicolson is thrilled to be sharing the stage with the main event and another undisputed battle between Super-Middleweight champions Franchon Crews-Dezurn and Elin Cederoos.

“It’s an honor for me to not only fight on this historic card but also to become one of the few Australians to fight at the Mecca of boxing Madison Square Garden and the first female,” said Nicolson. “This is a game changing moment for Women’s boxing and I’m so grateful for this opportunity to feature on this show.

“For me personally it will be three fights in eight weeks on both sides of the Atlantic, I feel like I’m improving every day and the opportunities that Matchroom and DAZN are giving me are helping me grow on my journey to become World champion. See you in NYC!”

“This is a massive night for boxing, and I am delighted to complete a great undercard with Skye,” said promoter Eddie Hearn. “She’s been faultless in her first two fights so far, and on this most momentous of nights for female fighters, she will be able to show the world what she is capable of on the biggest of stages.”

Nicolson completes a star-studded undercard with Jessie Vargas and Liam Smith meeting in a must-win battle at Super-Welterweight and there’s more undisputed action on the card as Crews-Dezurn and Cederroos decide who is the top dog at 168lbs.