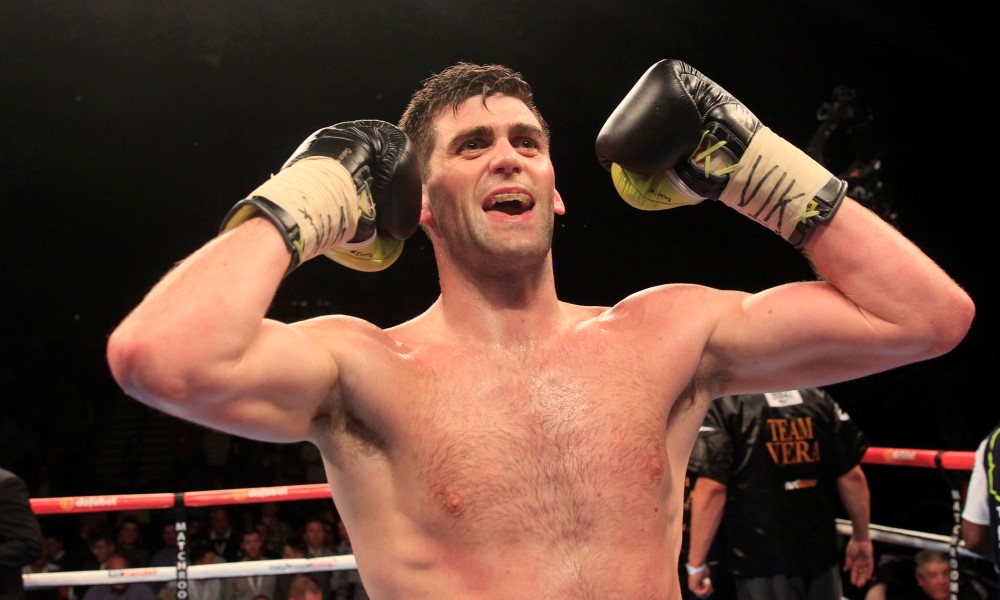 Rocky Fielding announced himself on the World Super Middleweight stage in stunning fashion, stopping Brian Vera in two rounds at the Echo Arena in Liverpool on Friday night, live on Sky Sports.

Fielding swarmed all over Vera from the start and decked him with a brutal left upper cut in the first round and then finished the job in style in the second round, flooring the American, who appeared off-balance from stumbling over, with a huge left hand and then pouring on more relentless pressure to force referee Ian John Lewis to halt the contest after 1.39 of the second round.

Fielding is ranked in the top 15 in all four governing bodies after landing the vacant WBC International title with his win, and the ever-humble Liverpool man admits even he was surprised by how quickly he dismissed the experienced visitor.

“I knew I carried that bit of power so if I caught him clean I could do a bit of damage and that is what I did.

“In the changing rooms warming up we were trying to slip his jab with the left upper cut and it worked. I didn’t even know I threw it, I just threw it, caught him and he went down. I was buzzing with that

“I work hard with Oliver Harrison and got some good sparring with Martin Murray. That was the fight I needed to pick me up.

“I enjoyed it. I want to thank everyone for coming out and supporting me.”

Promoter Eddie Hearn added: “He is so underrated. Nobody does that to Brian Vera. He deserves lot of credit and I feel he doesn’t get it. He is working his way up the world govern bodies and he is doing things the right way.”

Fielding’s fellow World-rated Liverpool talent Callum Smith followed Fielding into the ring tonight in his own acid test against Christopher Rebrasse, and Fielding and Hearn had their say on a potential Merseyside showdown.

“I will support Callum,” said Fielding. “He is a Scouser and we are all out here supporting each other. I will sit back down with Eddie and Oliver and see what the next move is. I am up for it.”

“Rocky and Callum is a huge fight but as much as the British title is a wonderful belt I feel it deserves a little bit more,” said Hearn. “If it comes with a little bit more I don’t see the problem in making that fight. Rocky wants World title fights and so does Callum. Over the next 12 months they are both going to get them. If they meet each other it could be done of those classic final eliminators. That was a great performance tonight and he deserves a lot of credit.”

Tony Bellew declared himself ready for a third World title shot after stopping Ivica Bacurin at the Echo Arena in Liverpool on Friday night, live on Sky Sports.

Bellew dropped the Croatian three times before the stoppage; in the second round with a left to the temple, in the fifth with a combination and then a right hand in the ninth, before referee Steve Gray called a halt to proceedings early in the tenth and final round with the visitor in trouble in the corner from another right hand.

The Liverpool star is hunting down a World title clash with IBF king Yoan Pablo Hernandez, who defends his crown for the fifth time in May, and the ‘Bomber’ revealed that he was struggling with the flu in the build-up.

“I got ill last week but there was no way I was missing this,” said Bellew, who sent his best wishes to Sky Sports pundit and former World champion Jim Watt, whose daughter tragically passed away on Wednesday. “Dave Coldwell has improved me 25 per cent at least but you cannot stop picking up injuries in camp and getting sick – my kids are bringing home every flu and cold bug from school.

“It was great to be back in there and back where I belong. I am ready for a World title shot. Eddie Hearn has delivered on every word he has said from day one and I believe that he will bring me that shot.”

Hearn added: “We want the winner of the IBF title fight in July and we’ll look to get him in there for that belt in October or November – it has to be a World title next for Tony.”

Martin Murray enjoyed an explosive start to life at Super Middleweight, delivering a crunching body shot to claim a second round KO win over George Beroshvili at the Echo Arena in Liverpool on Friday night, live on Sky Sports.

Murray was making his bow in the 168lbs division in his first fight under new promoter Eddie Hearn following his heroic efforts against Gennady Golovkin in February, and the three-time Middleweight World title challenger wasted little time in showing he will be a force to reckon with in the buzzing Super Middleweight scene.

The 32 year old hurt his Georgian opponent with left hooks to the body in the opening session, and it was that same shot that did for the visitor with 2.29 on the clock in the second session.

“I felt great in there, very strong and I think that Super Middleweight is going to be my good for me,” said Murray. “The Golovkin fight is in the past now, I learnt a lot from it and I’ve soaked that experience up but I’ve moved on from it and looking forward to making an impact at Super Middle.