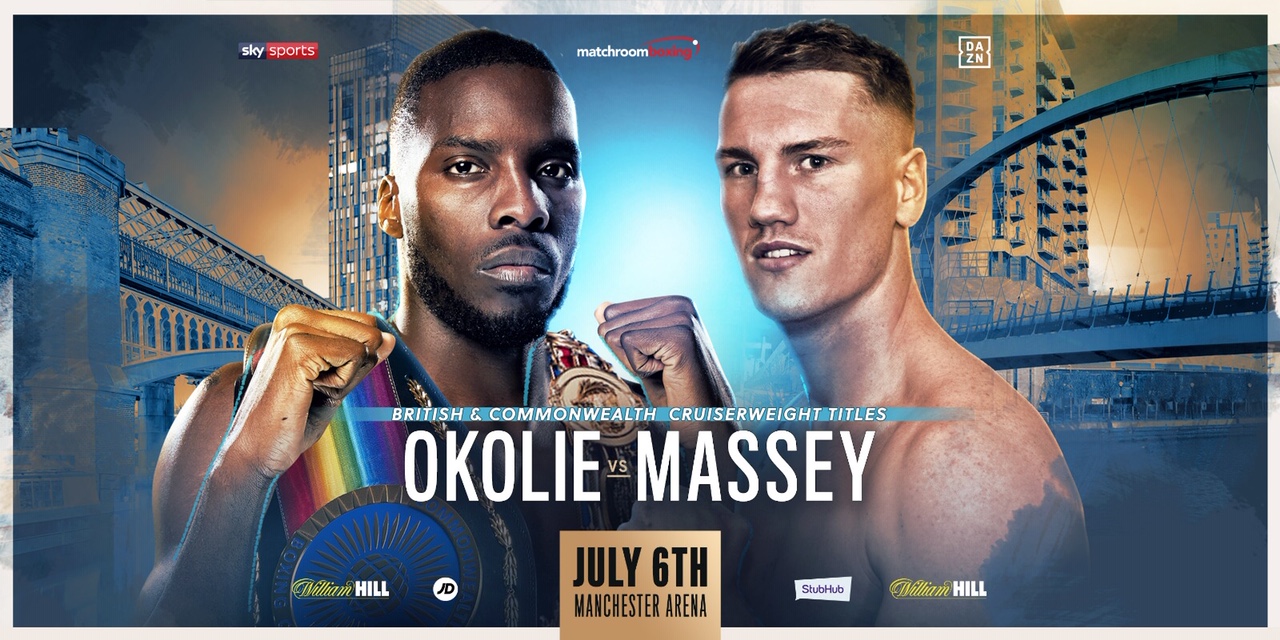 Okolie And Massey Clash For British And Commonwealth Crowns In Manchester

Lawrence Okolie will defend his British and Commonwealth Cruiserweight titles against Jack Massey on the same night that Scott Fitzgerald defends his WBA International Super-Welterweight title against Brian Rose in a huge Preston vs. Blackpool derby at Manchester Arena on Saturday July 6, live on Sky Sports in the UK and DAZN in the US.

Full details of the bumper summer bill in the North West, including main event confirmation and ticket details, will be formally announced next week.

Okolie (12-0, 9 KOs) added the Commonwealth title to his British belt with a fourth-round TKO of London rival Wadi Camacho at the Copper Box Arena last time out in March and the Rio 2016 Olympian puts both belts on the line once more against unbeaten Chapel-en-le-Frith man Massey.

‘One Smack’ (16-0, 8 KOs) has been chasing a fight with Hackney banger Okolie for the past year and the 26-year-old juggernaut says he is ready to propel his name to the top of the domestic 200lbs division in his first major title opportunity.

“Jack Massey is a fighter with pedigree,” said Okolie. “He has a lot of strength, a lot of ability and a lot of hunger. I’m going to enjoy beating him in front of all of his fans. He’s another undefeated fighter that I will inflict a first career defeat on.

“He has criticised me publicly and openly and I want to use my frustration to beat him in the most convincing way possible.”

“I’m over the moon to be getting this shot at the British and Commonwealth titles,” said Massey. “I have been waiting for my chance to test myself and I cannot wait until July 6th.

“I have the utmost respect for Lawrence Okolie, he boxed in the Olympics, won the British in just his 10th fight and is ranked in the top 10 by the WBA. I know it’s a huge step up for me but I’m ready.

Fitzgerald (13-0, 9 KOs) secured a thrilling victory over bitter rival Anthony Fowler to land the WBA ranking title at the M&S Bank Arena Liverpool in March, settling their feud after dropping his former Great Britain teammate in the final round to claim a split decision win and hand Fowler a first defeat in the pros.

The ‘Mad Man’ puts his belt on the line for the first time against former World title challenger Rose (35-1-1, 8 KOs) in a massive Lancashire showdown that will see the former British champion move back down to 154lbs in an attempt to fire his name back into to the mix in the latter stages of his career.

“It’s going to be a mad atmosphere with all of the Preston and Blackpool fans packed into Manchester Arena,” said Fitzgerald. “I’m confident of doing a good job on him. I’ll outjab him all night and get the win. This could be his last night in the sport so he’ll want to go out with a bang.

“He’s number two at Middleweight at the moment on BoxRec. He’s a good opponent. He’s a little older than me but experience is on his side. Before I ever even had an amateur fight, I knew who he was. He was the top boy around Lancashire, where we’re from. It’s a fight that I thought about before I even turned pro and now it’s happening.

“I wanted to fight Ted Cheeseman for the British title but this one was next on my list. It’s a big local rivalry and one that all of the Preston lads will get behind massively. The Cheeseman fight will still be there after I beat Rose, I want to take that belt off a champion.

“I made my debut at Manchester Arena. Preston is about the same distance from Liverpool as it is Manchester so there’ll be a lot in there again, probably more this time because there’s a lot of people buzzing off me right around Britain.”

“I’ve worked really hard at getting a big fight again so I’m made up that we’ve got this fight live on Sky Sports and DAZN,” said Rose. “I’ve had two wins since coming back and I’ve felt really good, so I can’t wait to step into the ring with Fitzgerald.

“I have a lot of respect for Fitzgerald for giving me the opportunity, and I don’t think people realise how big this fight for Blackpool and Preston. This is a huge fight for Lancashire and it’s going to be a great night for the fans, so may the best man win.

“I’ve worked really hard getting back to where I am and by moving back down to Super-Welterweight, which is where I achieved everything, I’m giving myself the best chance of making an impact. I won the British title and challenged for a World title at that weight, so I’ve already done what Fitzgerald is hoping to achieve in his career.

“It was only up at Middleweight where I came unstuck, but at this weight I know what I’m capable of, so this fight makes so much sense. It’s going to be a great fight, and I promise that I’ll be the best I’ve ever been. When I win this fight I can hopefully get a top ten ranking and then who knows what can happen.”