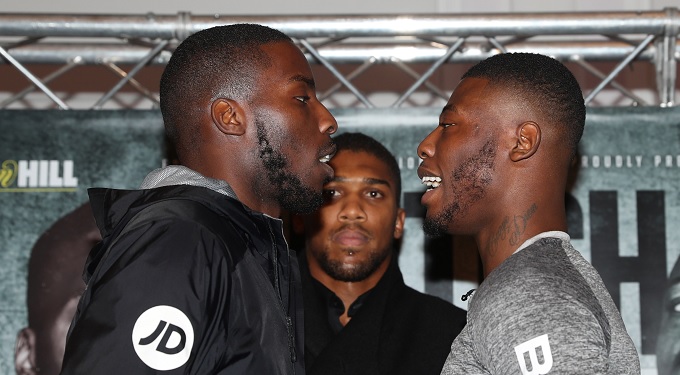 Lawrence Okolie and Isaac Chamberlain are predicting KO wins when they put their unbeaten records on the line at The O2 in London on February 3, live on Sky Sports presented by Eddie Hearn in association with AJ BXNG.

The pair met at a heated press conference in central London yesterday, and with the show dubbed ‘British Beef’, there was no shortage of tension between the talented duo as they were introduced to the media by Eddie Hearn and Anthony Joshua MBE.

Team GB Rio Olympian Okolie believes his amateur pedigree will be the difference-maker in the fight, while former Southern-Area champion Chamberlain wants to dent his London rival’s ego and points to sparring with the likes of Oleksandr Usyk as to how he’ll handle Okolie’s fearsome power.

“I am better than him in every single department,” said Okolie. “If he comes at me, it’s over quickly. If he boxes on the backfoot and look to take me rounds, I’ll show my boxing pedigree. Anything he brings to the table, I will answer it and do so with a brutal KO.

“He’s motivated by money, I’m motivated by my ambitions as a fighter. I’m nine months into my career and I feel ready to have a fight with someone in the top five in Britain, so this is normal really.

“It comes from jealousy from him and his coach, Ted Bami. They said that they’ve been watching me since I went to the Olympics. We’ve known each other for a long time and they see me as a big money fight and now they’ve got it – let’s see if it’s too early for me or if it’s too early for him.

“The people in his gym know what it takes to get to the Olympics, because they tried and failed. He’s never taken a risk as an amateur or a pro so he can’t talk about levels or pedigree as he’s done nothing to show it and he’s only boxed at Southern Area level. I haven’t boxed at that level yet but I’m taking that step-up now.

“Can Isaac take my power? Can Isaac take me into the later rounds? We’re going to find out. I see Isaac as a good fighter, very fast, a solid boxing IQ and he’s resilient, but that’s not enough against me as I going to get to him and get to him viciously.”

“I’m very confident,” said Chamberlain. “We’ve been preparing for this fight for a while, I can’t wait.  People will see on how I deal with him and adapt in the fight.

“I’ve sparred and boxed big hitters already, he waffles a lot and he talks to much, his ego is too high and when I beat him, it’ll knock him down a peg.

“I’m not the one that talks, that’s him. I know the way he acts and in the face to face, I could see through him. He has no heart and that will show on February 3.

“I’m in a good place and the excitement is real for this fight. It’s going to be an amazing night and to headline at The O2 after coming from nothing, I am so thankful and humbled.”

Okolie and Chamberlain top an action-packed bill in Greenwich as Watford’s Reece Bellotti puts his Commonwealth Featherweight title on the line for the first time against Crawley’s Ben Jones.

Hackney’s big punching Super-Lightweight Ohara Davies will be looking to record a sixth KO win in Greenwich as he continues his hunt for more title shots, Team GB Rio Olympian Joshua Buatsi laces them up for a fourth time in the paid ranks and Felix Cash is full of confidence after moving to 7-0 with a second successive first round KO win last week and is looking to land a first title shot at Middleweight in 2018.

Tickets are now on general sale at www.theO2.co.uk priced at £40, £60 and £100. VIP tickets are £150 and available exclusively from Matchroom Boxing at www.matchroomboxing.com.

Face value tickets for February 3 will also be available from http://www.stubhub.co.uk/matchroom-boxing-tickets/ from midday on Friday. StubHub is the official ticket partner and marketplace of Matchroom Boxing and Anthony Joshua.