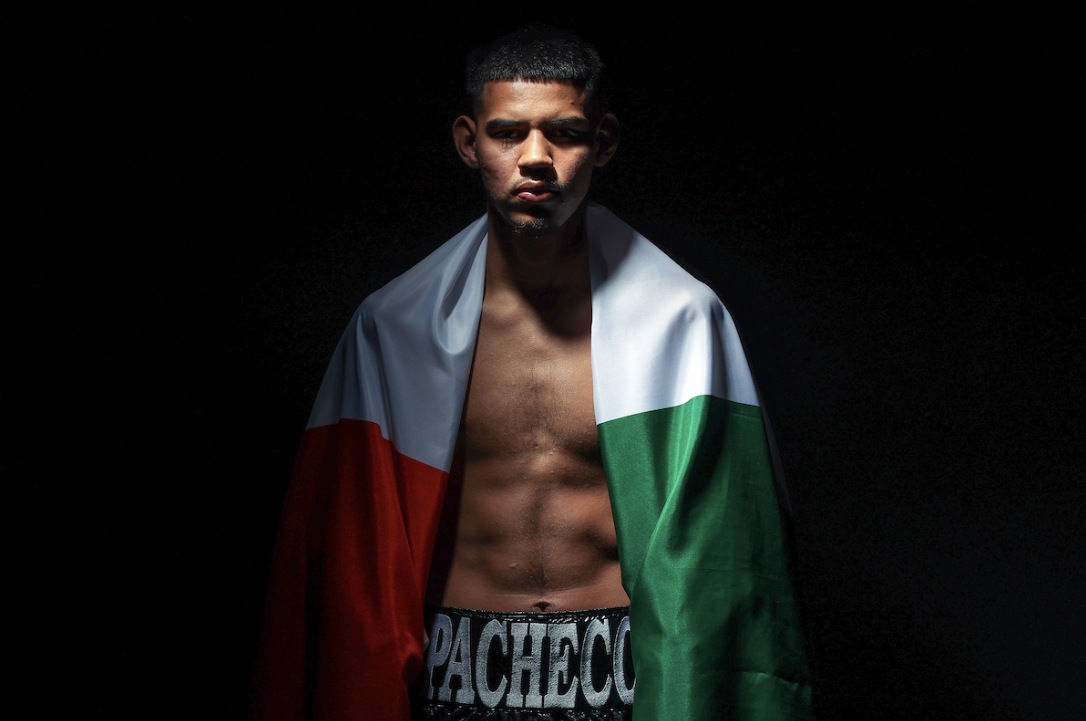 PACHECO: CANELO-GGG III IS SPECIAL TO ME

Super-Middleweight sensation recalls signing for Hearn ahead of Vegas outing

Diego Pacheco is ready to deliver on the big stage again – and does so on the undercard of a he goes for his first title against Enrique Collazo on the undercard of the trilogy clash between Canelo Alvarez and Gennadiy Golovkin at T-Mobile Arena in Las Vegas on Saturday night (September 17).

The event, presented by Matchroom, Canelo Promotions and GGG Promotions, will broadcast live on DAZN Pay-Per-View in the U.S. and Canada as well as around the world on DAZN (excluding Mexico, Latin America, and Kazakhstan)​.

TICKETS ARE ON SALE NOW VIA AXS.COM

Pacheco (15-0 12 KOs) has been imperious in the paid ranks and after winning his first ten round contest by forcing Raul Ortega to retire after four rounds in Guadalajara in June, and now meets Collazo for the vacant WBC USNBC Silver strap in his first bout with a belt on the line.

Canelo is the king of the Super-Middleweight division, and this is the second time that Pacheco has fought on the undercard of the Mexican superstar in February 2021 in Miami. Alvarez employed Pacheco for sparring ahead of his clash with Briton Callum Smith in December 2020 due to their similar size, and Pacheco impressed the champion, who’s trilogy clash with fierce foe Golovkin has special significance for Pacheco.

“On the date of Canelo-GGG II, that’s the day that I signed my contract with Eddie Hearn and Matchroom,” said Pacheco. “This has brought back so many memories and I’m honored to be on the card. I’m so grateful for where I am, and I just want to make the most of these opportunities.

“I was part of Canelo’s camp for the Callum Smith fight in San Antonio, and I was meant to be on the undercard too, but I got sick in the build-up. I got in trouble too because I didn’t want to tell anyone at first that I was sick because I really wanted to fight on the card, but I could have got Canelo sick and COVID was around then so I had to stop training and I couldn’t fight. So, it’s great to be here now.

“Canelo is so strong. Even blocking or parrying his jabs, you can feel the power, his hands are like rocks. I was told I was only going to spar three rounds with Canelo, but then after three I was looking good, and I was moving well, and it was good for him, so it was ‘let’s do one more’ and ‘let’s do one more’.

“We did six rounds and then I went back in again, so that made me feel good and working with David Benavidez is great for me, I’m doing lots of rounds with him and it’s all boosting my confidence. I’m a big GGG fan but I think that Canelo takes the third one.”

Pacheco’s clash with Collazo is part of a huge night of action in Vegas, topped by the epic trilogy battle between Canelo and Golovkin.

Three more young talents complete the stacked card, as Marc Castro appears on his fifth Canelo undercard against Kevin Montiel Mendoza, Aaron Aponte mixes it up against Canelo Promotions’ unbeaten prospect Fernando Molina also over eight and Anthony Herrera gets the chance to bounce back to winning ways on the biggest stage as he takes on Delvin McKinley.

All that action leads into the third installment of the classic modern rivalry between Canelo and Golovkin, with the Mexican king putting his undisputed Super-Middleweight crown on the line against Kazakhstan’s reigning WBA and IBF Middleweight ruler in the most anticipated match up of 2022.