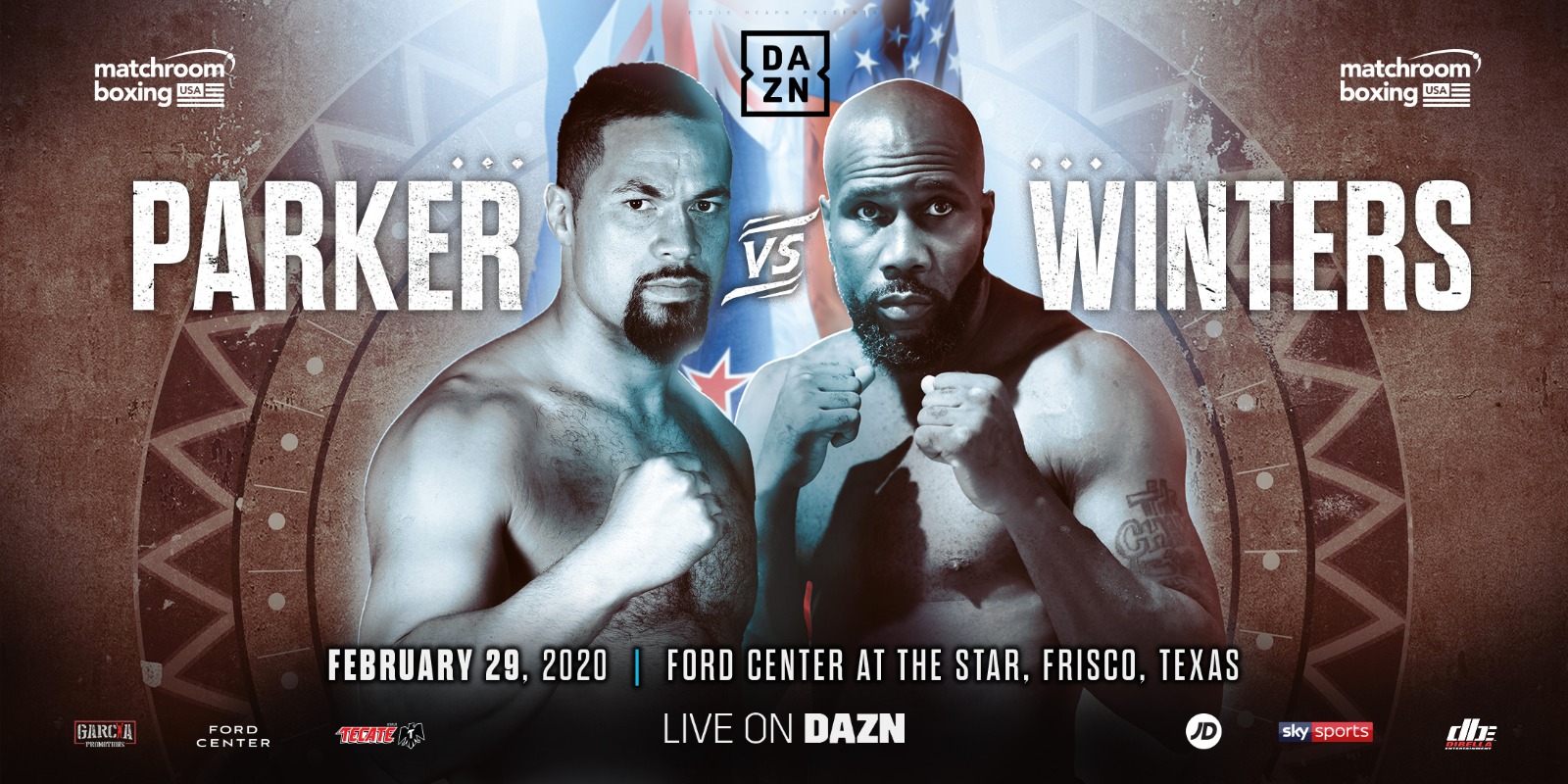 Joseph Parker will return to action against Shawndell Winters at Ford Center at The Star in Frisco, Texas, on Saturday February 29, live on DAZN in the US and on Sky Sports in the UK.

Parker (26-2 20 KOs) is back on the hunt to regain his World champion status having been forced out of a October clash with Derek Chisora in London after a spider bite on his leg led to an illness that robbed the Kiwi of a fight with the all-action Brit.

The former WBO ruler had teed up a mouth-watering clash with ‘Del Boy’ having stopped Alex Leapai in the tenth round of their clash in Providence, RI in June, the first fight of a three-fight deal with Eddie Hearn’s Matchroom Boxing USA.

Parker will look to reignite his charge to elite level and World title showdowns in Texas against Winters, the Illinois man ranked #14 with the WBA and looking to extend his KO run having taken the unbeaten record of Canadian-Ukrainian Oleksandr Teslenko to land the NABA title in Ontario, Canada in September and following that with another stoppage win on enemy turf with a fifth round victory over Poland’s Sergeij Werwejko in November.

Winters, who has KO’d 12 of his 13 wins, will be looking to continue his winning streak and scupper Parker’s plans to become a two-time World champion, but Parker plans to make an explosive statement on a stacked card in the Lone Star State.

“I am delighted to be back in action on this huge bill in Texas,” said Parker. It was frustrating to be ruled out of the Chisora fight in October, especially in such an unusual way, but I have been on fire in the gym in Las Vegas and we’re ready to get back to business. The division is moving at a great pace and this is a perfect opportunity to show the world that I am one of the elite players in the division.

“Shawndell is on a great run and I know he’ll bring it on February 29 – but I am ready to show that I will become a two-time World champion in 2020 and that starts with a dominant and destructive display in Frisco.”

“This is the biggest fight of my career and I am going to make it count,” said Winters. “I am used to being the underdog, it’s something that I thrive on and if Joseph Parker underestimates me, he’s going to be in for a bad night – because I am going in there to take him out.

“I want to thank Eddie Hearn, Matchroom Boxing USA, DiBella Entertainment and Be Def Sports for the opportunity and special thanks to champion Joseph for taking me as a worthy opponent – but he will live to regret it!”

“Shawndell is a very tough competitor who recently moved up to Heavyweight. He’s already pulled off two consecutive upsets against favored opponents, and the fight before that should have been a third,” said Lou DiBella, President of DiBella Entertainment. “He’s looking for his biggest upset yet against former World champion Joseph Parker. This is a tremendous opportunity for this ex-Cruiserweight Rocky from Harvey, Illinois. I believe he is a live underdog.”

Parker’s clash with Winters is part of a huge night of action in Texas topped by a mouthwatering Welterweight clash between Mikey Garcia (39-1 30 KOs) and Jessie Vargas (29-2-2 11 KOs).