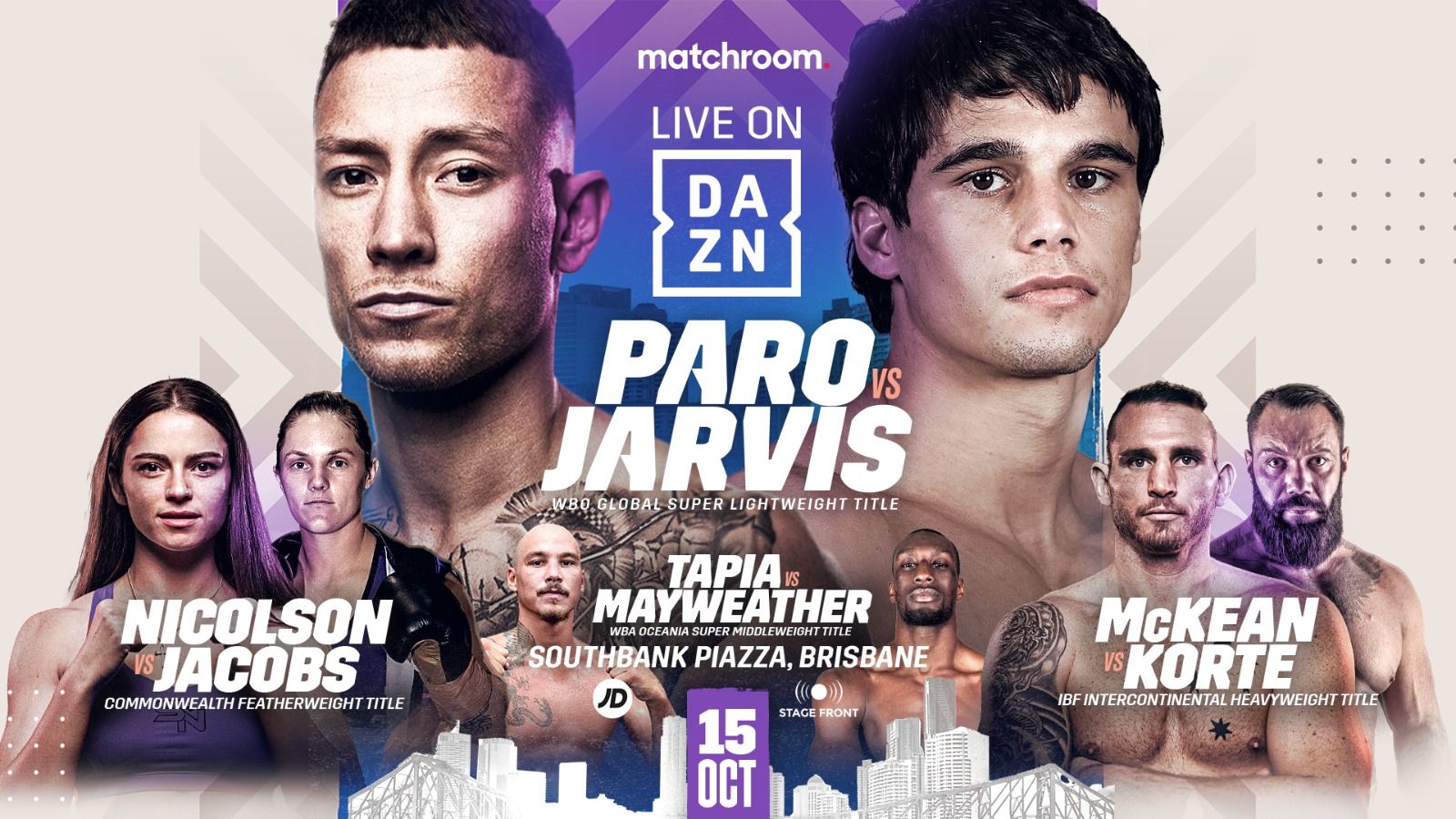 PARO VS. JARVIS LANDS AT THE SOUTH BANK PIAZZA IN BRISBANE AS MATCHROOM KICK OFF NEW ERA IN AUSTRALIA ON OCTOBER 15

Liam Paro and Brock Jarvis will clash for the WBO Global Super-Lightweight Title at the South Bank Piazza in Brisbane on Saturday October 15, live to subscribers worldwide on DAZN, as Matchroom break new ground with their first show in Australia.

Paro (22-0 13 KOs) is ranked No.1 with the WBO at 140lbs and the Brisbane star will aim to kick-off Matchroom’s new era Down Under in style on his home turf. The 26-year-old inked a promotional pact with Hearn in December after seeing off the unbeaten Yomar Alamo in Tampa, Florida on his American debut.

Jarvis (20-0 18 KOs) also comes into the bout on the back of his first fight on US soil, where the New South Wales ace came out on top in a wild shoot out with Alejando Rodriguez with a fifth-round stoppage in Fresno, California. The 24-year-old recorded his 18th win inside the distance from 20 fights that night and has promised fans another all-action affair next month.

“My rankings speak for themselves; I’ve taken no short cuts to get here,” said Paro. “I ain’t losing to a guy who isn’t on my level. His team will quickly realize that they’ve made the wrong move chasing a fight with me. On fight night I’ll show you why I’m rated No.1.

“I’ve got a statement to make. I want to be a household name in Australia, and this is another guy in my way. This is my destiny so I’m not letting him come here a wreck it – no way. We didn’t have to take this fight. We could have sat pretty at No.1 until that title came but love to fight. This is what I do.”

“Matchroom boxing is the biggest promotional company in the world and it’s fantastic that they are coming to Australia,” said Jarvis. “I’m really proud and excited to be part of their first event here and I’m looking forward to putting on a show for everyone.

“I am so excited to kick-off this new era for Matchroom in Australia,” said Matchroom Sport Chairman Eddie Hearn. “Australian fans are so passionate about sport and boxing is on the rise here, so I have no doubt that they will embrace the fight nights that we put on and join us in creating unforgettable nights that showcase this country as one of the key players for the sport globally.

“In order to put on great nights, you need to make exciting fights, and our first main event Down Under promises to be explosive stuff. Liam and Brock are only ever in thrilling bouts and the winner will be in prime position to hunt for a World title fight.”

“We are delighted to be broadcasting our first event in Australia’, saidJoe Markowski, CEO DAZN North America. “This card features some of the best up and coming talent Australia has to offer and we look forward to hosting more and more shows as the sport grows Down Under. Watch it live worldwide on DAZN.”