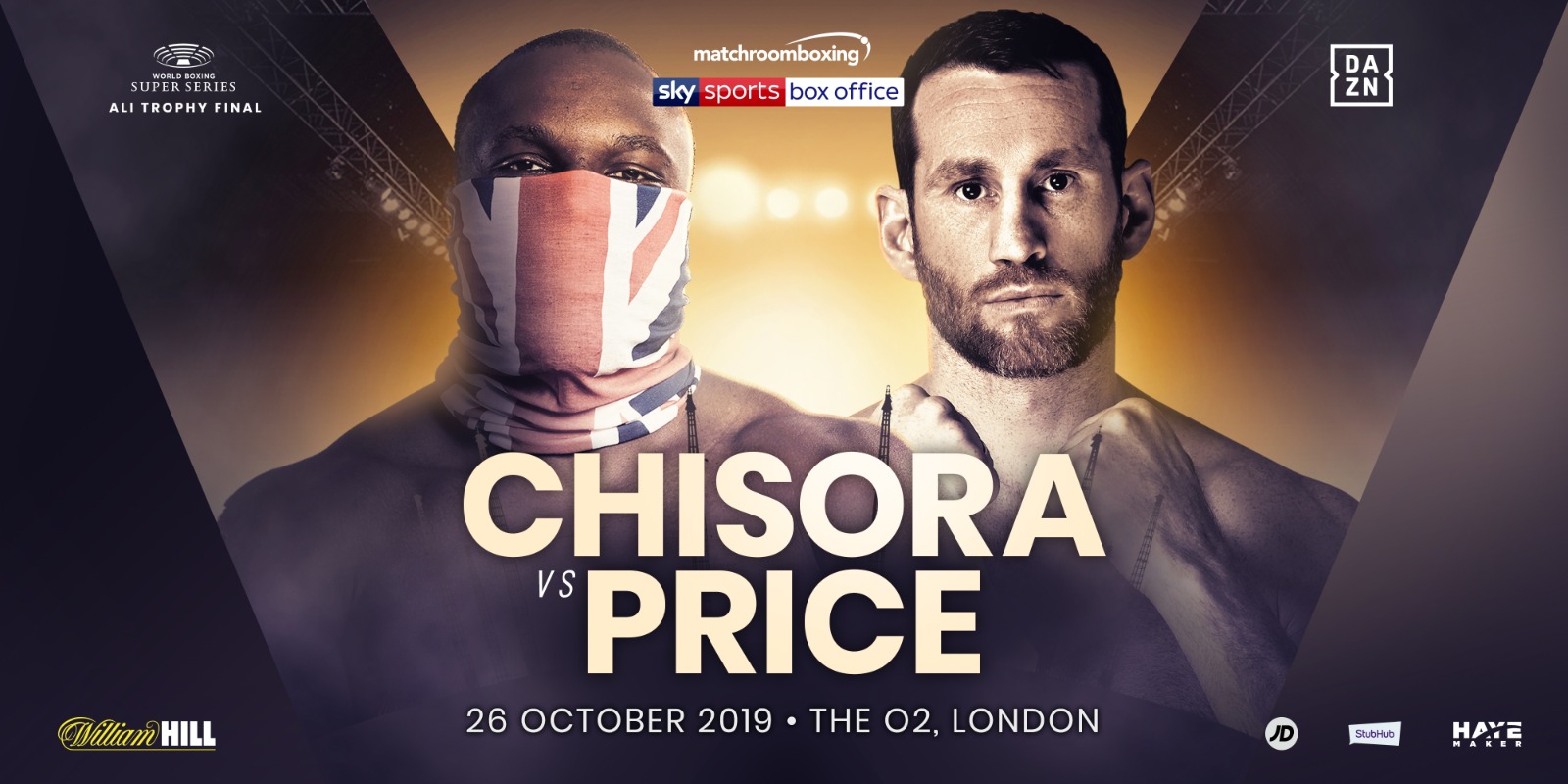 Price To Face Chisora In All British Heavyweight Battle

Derek Chisora will face David Price at The O2 on Saturday October 26, live on Sky Sports Box Office in the UK and DAZN in the US.

Chisora (31-9, 22 KO’s), who was scheduled to face former WBO World Champion Joseph Parker until the New Zealander was forced out through illness, will now face Liverpool’s David Price in an intriguing British Heavyweight match-up in which the winner will cement themselves as a top contender in boxing’s blue-ribbon division.

Fan favourite Chisora returns to the ring three months on from his emphatic second round KO win against Artur Szpilka for what will be his sixth bout in succession in Greenwich. Chisora has been involved in some thrilling encounters in the capital of late, including his enthralling battle with Dillian Whyte and his sensational knockout victory over Carlos Takam.

Price (25-6, 20 KO’s), who was scheduled to fight in Liverpool on November 23, steps in to face Chisora on the back of his career-changing win over Dave Allen at The O2, which has sparked a rejuvenated confidence in the Liverpudlian.

‘Big Truck’, who has won three on the bounce and hasn’t tasted defeat since September 2018, knows that a win over Derek Chisora can catapult him into the frame for some huge fights in 2020.

“It didn’t matter who got in the ring with me on October 26th I’m ready for WAR. Parker b*tched out, it’s like he thinks he is Peter Parker not Joseph Parker with his Spider-Man excuses. It’s cool, let him do his thing,” said Derek Chisora.

“David Price has stepped up and I’m ready for whatever he brings. If he thinks I’m just going to stand there and be a punch bag like Dave Allen he is in for a shock. This is north versus south and in my home town I write the rules. Saturday 26th October get ready to scream TIMBER!”

“I’m very excited for this fight,” said Price. “Derek is a great competitor and I’m sure he’ll bring the best out of me. I kept in the gym all summer because I had a feeling I had to be ready for a call like this, and ready I am.”

“I’m delighted to get this fight over the line, It’s a huge all British Heavyweight fight on what will be one of the biggest boxing nights of the year,” said Eddie Hearn.

“It was frustrating to lose the Parker fight but I feel we now have a fight with even more curiosity and danger on October 26. The careers of both men are on the line, they will be giving it everything. It’s going to be a dramatic fight and dramatic night.”

David Haye added: “Derek is a fighter who was obviously willing to jump in the ring with anyone. Parker being forced out of the bout due to illness was naturally a huge blow but Derek has remained focused and in the gym. In recent years many had written him off but his emphatic destruction of Szpilka inside two rounds in July sent out a message to the boxing world. I’ve known Price since I first sparred him in 2005 when he was a young promising amateur. He used his impressive 6’9 frame and talent to capture an Olympic Bronze medal in Beijing in 2008. Going on to turn professional less than a year later on a Hayemaker Promotions show, so admittedly it’s a little strange that a decade later he will be in the opposing corner.

“I’m well aware Price on his day can cause any Heavyweight nightmares. Derek thrives on challenge and wants to be in the biggest fights to get fans excited. It’s a must win fight for both men and business is business, friendship aside, it’s time to go to work for both fighters. On Saturday 26th October expect a destructive showdown between two heavyweights out to prove themselves in the division.”

Adam Smith, Head of Sky Sports Boxing said: “I am absolutely thrilled that we have such a brilliant new fight lined up for October 26th. Everyone was so disappointed to see Joseph Parker have to pull out of his clash with Derek Chisora, but this is the unpredictability and excitement of boxing – in steps big David Price. What a captivating dual this now is.

“Everyone has been stopping me to say get Pricey and Eddie has literally pulled a rabbit out of the hat. I told him I wanted a great replacement – this is fabulous. David is coming off that punch perfect win over David Allen; Derek off the stunning KO of Artur Szpilka – this is a cracking Heavyweight battle to add to one of THE cards of 2019 and October 26 is set to be a magnificent night on Sky Sports Box Office at The O2.”