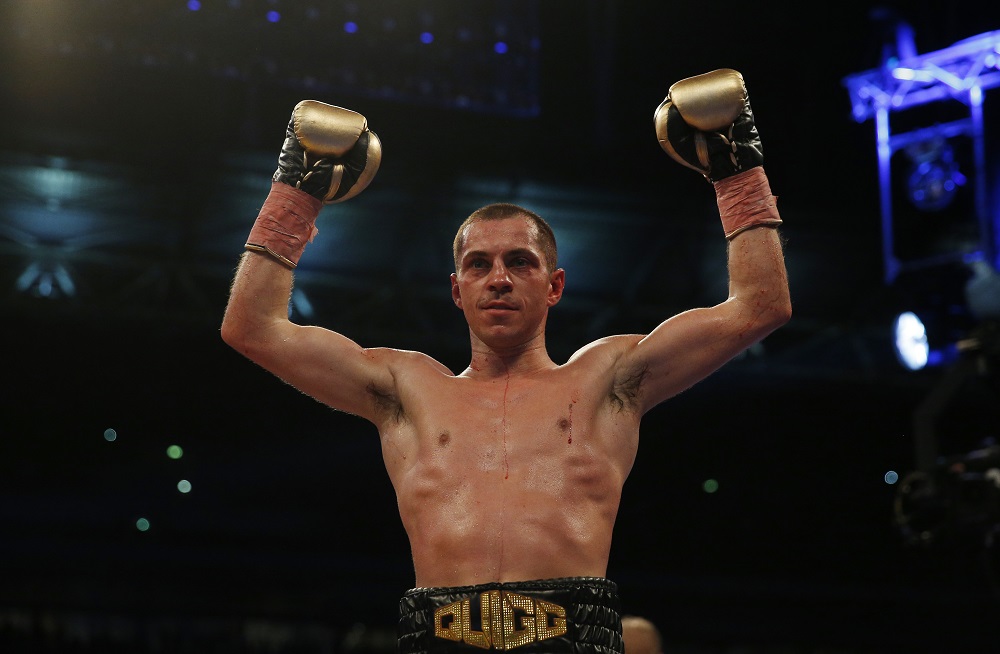 Scott Quigg believes he can become a two-weight World champion when he challenges WBO Featherweight champion Oscar Valdez on Saturday March 10 at the StubHub Center in Carson, California live on Sky Sports in the UK and on ESPN, ESPN Deportes and streamed live on the ESPN App in the US.

Former WBA Super-Bantamweight king Quigg served notice of his intent to top the world once again when he dispatched Oleg Yefimovich in clinical fashion in six rounds in Monaco in November in his second fight at his new weight.

The 29 year old faces a tough task to get back to the summit in the form of undefeated Valdez, the Mexican making the fourth defence of the title he landed in in 2016, but Quigg is working hard in Los Angeles with trainer Freddie Roach to find the formula to beat a fighter he knows well and respects.

“This is a fight that I’m really looking forward to. It’s a great fight,” said Quigg. “I have a lot of respect for Oscar and his team. We’ve been in the gym together in the past, helping each other prepare for a fight. They are good people.

“I’ve been in training for four weeks already and now I’ve just linked up with Freddie Roach to begin the last eight weeks of camp. This is a great opportunity for me — making my U.S. debut on a great platform on ESPN – and I’m confident on March 10 I’ll become World champion again.”

“I know that my World title defence against Scott Quigg will be a fun one for all the boxing fans because our styles combine perfectly to make a real war,” said Valdez. “As usual, on March 10, I will leave it all in the ring at StubHub Center, to show everyone that I’m one of the best featherweights in the world”

“Oscar Valdez has passed every in-ring test with flying colours, but the biggest test of his professional career will take place on March 10 against Scott Quigg, who like Oscar, rarely leaves a fight in the hands of the judges. The fans watching at StubHub and live across ESPN’s platforms are in for an exciting night and a sensational card, which will be announced shortly,” said Hall of Fame promoter Bob Arum.

“I’m delighted to get this fight made – I feel it’s one of the best fights in the division right now,” said Quigg’s promoter Eddie Hearn. “Both guys like to come forward and throw aggressive combinations and I do not believe we will hear the final bell. What I do believe is that on March 10 Scott Quigg will become a two-weight World Champion in a fight of the year contender, live on ESPN”

“We’re very excited for the fight against Quigg. This fight will further showcase Oscar’s skills and will demonstrate that he is a star,” said Frank Espinoza, manager of Valdez.  “Oscar is one of the best in the world and against Quigg he’ll prove it once again.”

Valdez, who represented México in the 2008 and 2012 Olympics, was the first Mexican fighter to qualify for two Olympic games. He is considered one of the bright lights of the Featherweight division and a new face for boxing’s next generation. He will be making the fourth defence of the world title he won on July 23, 2016 via a second-round knockout of undefeated No. 2 rated Matías Rueda.  Rueda entered that fight having won his previous 10 bouts by stoppage.  In his first defence, which took place, on November 5, 2016, Valdez blasted out No. 1 contender Hiroshige Osawa via a seventh-round TKO.  On April 22, in his 2017 debut, his first pay-per-view event that featured him in the main event, Valdez went toe-to toe for 12 rounds with No. 1 contender Miguel Marriaga, winning a unanimous decision. Marriaga, a three-time world title challenger, went into that fight having won 15 of his previous 19 bouts by way of knockout. In his most recent fight, on September 22, he again went mano a mano in a 12-rounder that had the fans on their feet throughout the fight. This time Valdez won a unanimous decision over Genesis Servania, the No. 4 world-rated contender.

Quigg, who has fought all but once in his native England, is trained by Hall of Roach. After capturing the WBA interim super bantamweight world title in 2012 and making one successful title defence that same year, he was elevated to WBA super bantamweight world champion in 2013. Quigg successfully defended that world title six times, four of them by way of knockout during his three-year reign.  He lost the title via a split decision to IBF champion Carl Frampton in a 2016 title unification bout. Since that fight, Quigg has moved up to the Featherweight division and won his past three fights, including a 12-round Featherweight title elimination bout against Simion Viorel. Quigg is currently world-rated No. 2 by the IBF and No. 4 by the WBA.