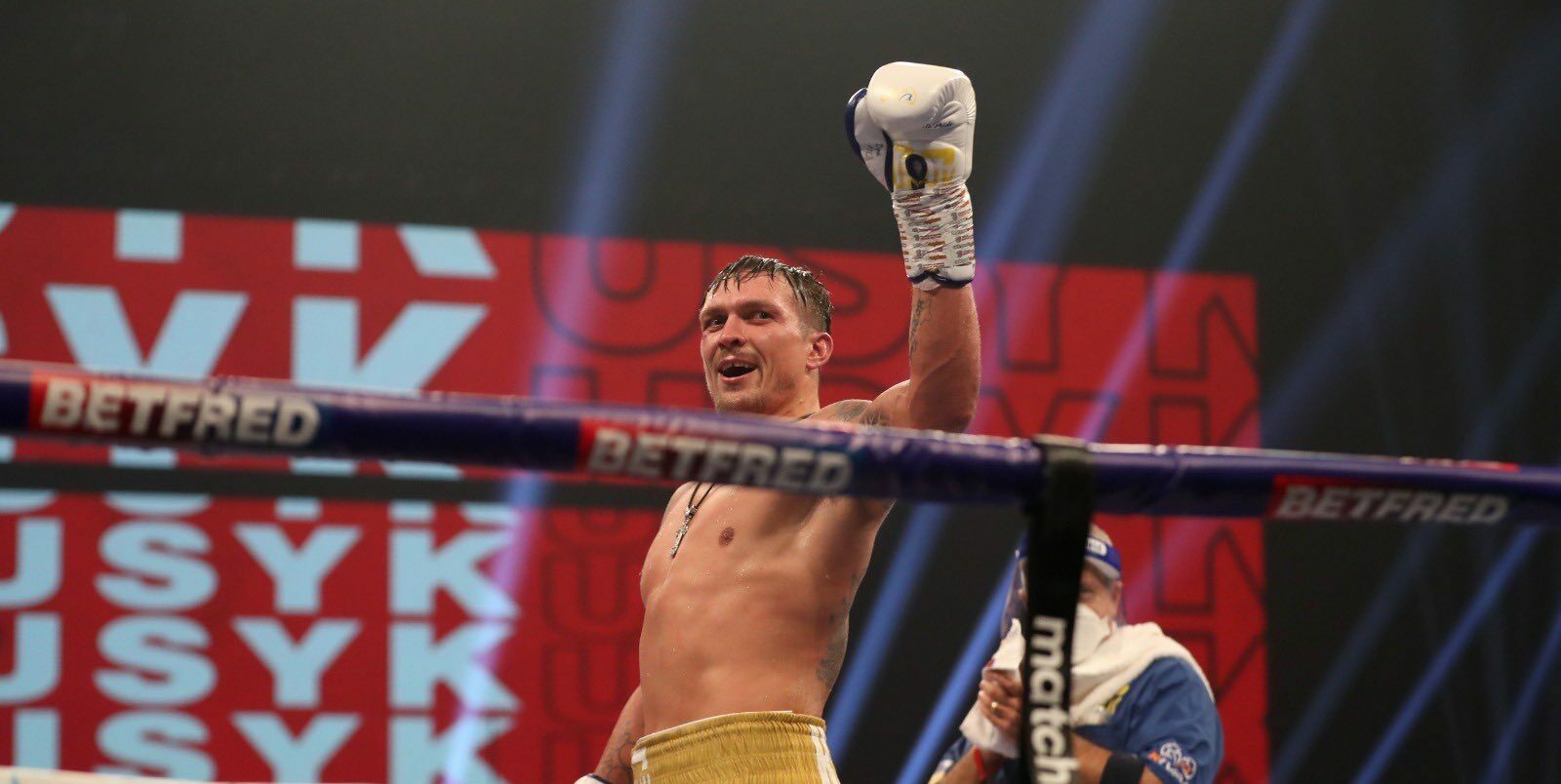 Oleksandr Usyk passed his first major test in the Heavyweight division by outpointing Derek Chisora and winning their high-stakes clash via unanimous decision.

Usyk remains the WBO Mandatory Challenger to Anthony Joshua, who watched from ringside, and who he intends to fight in 2021.

“I was very happy to be back in the ring,” Usyk told Matchroom afterwards. “I haven’t fought for more than a year. It was a huge pleasure for me. You saw my smile when I went into the ring. I really want to thank god for this victory. Derek has big power, he has strong punches but I was prepared for it.

“I didn’t think about his boxing IQ. All I was thinking about was the boxing and what I wanted to do. I am very thankful for Derek giving me this opportunity. I am very thankful to this family and his team. I am happy. He is a good man. Anthony (Joshua), how are you? I am coming for you.”

A disappointed Chisora reacted to defeat: “I feel great. I was pushing the pace. I’m just disappointed with the result, gutted. To everybody who can’t make it [to the fight], I’m gutted for everybody. In the Heavyweight game, you have to fight not box. I gave a couple of rounds away.”

Lee Selby’s lingering hopes of another World Title fight could have been ended by a split decision defeat to Australia’s George Kambosos Jr.

The former Featherweight World Champion received a generous score of 115-114 from one of the judges, but Kambosos Jr deservedly sealed victory with scores of 118-110 and 116-112, in a Final Eliminator for the IBF belt, which is currently held by Unified World Lightweight Champion Teofimo Lopez.

“I can’t get this smile off my face,” said Kambosos Jr. “It hasn’t sunk in yet. I dug deep and I won a lot of them rounds. The big shots landed and I thought he was hurt a few times. That’s a former World Champion. The guy is still a very respected fighter. It was a great win. That’s two former World Champions in their backyards. I’m a road warrior. I’m a proud Aussie. I knew I won the fight. The whole time people thought I was being arrogant. I was never arrogant to him. It’s just confidence and self belief. I’m a young hungry lion. I was never arrogant to him. I respect him.

“I knew the job I would do. I’m a confident fighter and I back my ability. I thought I hurt him a few times and I thought he nearly went. He’s an experienced guy and he beat Ricky Burns in his last fight. I’m the young hungry guy coming up. That was a great win. That’s another twelve rounds in my bank. The body shots busted him up. The right hand to the body, the stiff jab to the body. I was very composed. I feel like I’m in my prime. There’s so much more work to do. I’m coming for the Unified Lightweight World Title against Teofimo Lopez. Two young hungry fighters!”

The former amateur World Champion was a class above her Scottish rival from the opening bell and kept herself on course for a potential showdown with American star and former amateur foe Claressa Shields.

“I’m absolutely over the moon,” Marshall told Matchroom. “Fair play to Hannah. She’s an amazing fighter with big heart and I’ve got loads of respect for her. I’m just thrilled to bits. I knew I was good enough. I’ve always known I was good enough. The chances have just never been there for me. Thank god it came tonight. Me and Hannah sold that fight, we really sold that fight. I don’t know what it was like for her but there was no real bad blood there for me.

“With Peter testing positive two weeks ago, I thought that was just typical me! I just had to ride the wave. I think England has got the best female professional boxers. COVID was a blessing because it’s brought them all out. I’m the first female boxer to be an amateur World Champion and a professional World Champion. I beat the men. I beat the men to it. It’s just a dream.

“The pool isn’t that big at the higher weights. I’d like to go up to Super-Middleweight. I’m not really interested in Super-Welter. I think my power stays at Middle. I’ve just battered Claressa Shields’ mate. I’ve just battered her best mate. I’m sure she said Hannah was going to stop me. So what does that say about her boxing IQ. She couldn’t get Rankin out of there. Hannah is a brave fighter. Claressa couldn’t do that. Me against Shields is the biggest fight in women’s boxing. Let’s get it on. I want a piece of it.”

The Belfast fighter continued his steady climb back up the rankings since last year’s defeat to Richard Riakporhe, but he was made to work for a win over the spirited Laggoune, with one judge scoring it a 114-114 draw, while he received the verdict with tallies of 116-112 and 116-113.

“I’m over the moon,” McCarthy told Matchroom. “It’s taken a lifetime of work to get to this point. This is just the beginning for me. I want bigger and better things. I’m so happy and proud of myself. I’m proud of my team. I can’t even remember what the scores were to be honest, but as long as they had me winning, that’s all that matters. It’s surreal. I thought I was going to start balling my eyes out. I couldn’t go back home and have everyone slagging me for being a cry baby! I held it together and I’m still holding it together! I’m emotional because this has been a long time coming.

“I’ve been knocking on the door for a long time. Now it’s all starting to come into play. I’d like to shout out my team; Mark Dunlop, Pete Taylor and everyone else for making this possible. Next year I would love to fight Mairis Briedis. He’s the number one Cruiserweight in the world, and I want to be number one.He is the guy I want, but I’d take any one of them to be honest. Anyone who has a belt, big Mac is onto you! I know my family are proud. I’m looking forward to getting home to them in the morning. Hopefully they will spoil me, I don’t want to do any housework for the next two weeks!

“I should probably thank Richard Riakporhe for giving me the kick up the ass that I needed. It’s never happening again (losing). I’m here now. I’m the champion of Europe. The world is my oyster. Peter has moulded me into the boxer that I knew I always could be. This is the one thing that I know I can do very well. I wasn’t going to let anyone stop me doing it. Shout out to everybody in West Belfast and shout out to everyone in Greater Belfast.”

Somali-British boxer Ramla Ali looked impressive on her highly anticipated professional debut as she dominated Germany’s Eva Hubmeyer, comfortably winning all six rounds in her first fight without a headguard.

The Super-Bantamweight, who is signed to Anthony Joshua’s 258 management team, sealed a shutout win over Hubmeyer with a score of 60-54. Sending out stiff jabs, Ali quickly took command in the opening round, and she unloaded swift hooks as Hubmeyer backed to the ropes.

Ali followed her jolting jab with straight right hands as she continued to punish Hubmeyer in the third, while the German had to withstand more hurtful right hands in the fourth. Searching for a stoppage, Ali forced Hubmeyer to the ropes with a fiery cluster of shots in the fifth, but she had to settle for a wide points win after piling on more punches in the sixth.

“I’m not going to say I was crap, but I was a bit disappointed with how I performed tonight,” Ali told Matchroom afterwards. “I allowed her, being a shorter opponent, to get into range way too much. I think it was just the nerves kicking in with it being my professional debut. I think I let all of that get to me and I allowed her to get into range. I should have kept her long. I think that’s what I’m most disappointed with.

“When you come from the amateurs and you go into international competitions, you don’t get a say in who you’re going to compete with. You could have someone that is rushing at you like a bulldog and you just have to keep them away as much as possible. I feel like my years in the amateurs prepared me for that. The majority of the time I knew how to keep her away. My experience came into play there for sure.

“It felt amazing when I connected with her face with the smaller gloves. When it lands on your face it isn’t nice! You have to take some to give some. The majority of the time you don’t really feel it because of all of the adrenaline that is rushing through you. It’s a huge difference to the amateurs but I’m learning to appreciate it.

“I think I’ve been promised an opportunity on the undercard of Anthony Joshua vs. Kubrat Pulev unless things chance, so I’m really hoping to have another fight this year. The last fight I had was in February. It has been a long time out. They always say you get quite rusty when you come back in. I’m hoping to improve on tonight’s performance in December for sure. I hope I was entertaining. I hope people enjoyed watching me tonight.”

Timlin and Skelly battle to draw

Amy Timlin and Carly Skelly battled to a split draw in the opening fight of the night at The SSE Arena, Wembley. The pair had been due to open the card on Sky Sports Facebook but were bumped up to the Sky Sports Box Office segment of the show after Kash Farooq vs. Martin Tecuapetla was called off on Friday night due to a positive COVID-19 test in Farooq’s team.

With the vacant Commonwealth Super-Bantamweight Title on the line, Skelly appeared to edge the early rounds with sustained aggression, but Timlin gradually began to find her range with crisp counter punches and the judges could not separate both fighters.

Timlin received a 96-95 tally from one judge, while another official favoured Skelly with a 97-96 score, and the final judge made it a 95-95 draw, meaning the Commonwealth belt remained vacant.

“It was heartbreaking because I’ve trained so hard for it,” Timlin told Sky Sports afterwards. “You can’t really fault the result because it was a close fight, and I thought I won some rounds and she won some rounds. I think it was a fair decision. I would love to do that fight again. I think styles make fights. That was a really good fight and I’d love to do the rematch. It could have gone either way.”

“It’s frustrating,” Skelly told Sky Sports afterwards. “It was quite close early on but I thought I came on stronger at the end. It’s hard to say. I’ll have to watch it back and see what I think. I thought I done enough. Just being here tonight was a boss opportunity for the both of us. Hopefully we get to do it again and we’ll get it decided in the next one. 100% I’d do it again.”