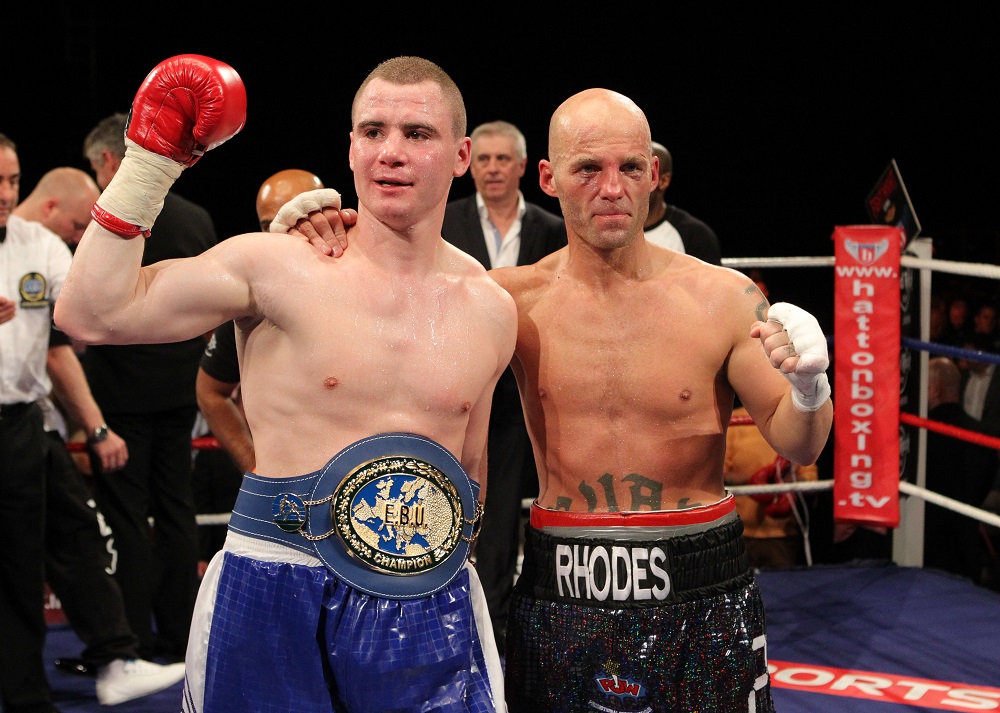 Rhodes: Rabchenko Dangerous – But Brook Can Stop Him

Ryan Rhodes knows first-hand the threat that Sergey Rabchenko poses to Kell Brook as they clash for the WBC Silver Super-Welterweight title on Saturday night at the FlyDSA Arena in Sheffield, live on Sky Sports – but expects Brook to shine on his debut at 154lbs.

Sheffield star Rhodes met the Belarussian in June 2012 for the European Super-Welterweight title in Manchester, with Rabchenko stopping Rhodes with a body shot at the end of the seventh round.

“Rabchenko is a good fighter,” said Rhodes. “He’s strong, got a bit of a dig on him and when he’s on song he’s a handful. He was on a bit of a high when I boxed him, Ricky Hatton was looking after him at the time and was keeping him active.

“Sergey can take a shot as well. I caught him with a big shot in the third round and his legs dipped but credit to him – he rode the storm and ended up recovering to get the win.

“I was 95 years old and in my 293rd fight when I fought Rabchenko, so Kell has nothing to worry about! I was coming to the latter stages of my career. There wasn’t much in the fight, it was back and forth and then he caught me with a sickening body shot.

“One thing Kell will find is that he’s there to be hit. He stands in front of you all the time, he won’t move that much. It might be that Kell takes a shot to give one back.

“I was at a couple of Rabchenko fights before we fought, I knew it was going to happen so studied him up close and personal. The one thing that stood out was his movement. I planned to be as elusive as possible, make sure I’m not there to get hit and counter.

“Kell seems to be hungry again. You can’t worry about these ifs and buts, he looks happy at the minute and confident with that little bit of extra weight. I know how badly Kell struggled at times to make 147lbs. He’s got that extra 7lbs to play with which will be a massive difference.

“Kell could have gone for an easier touch for his first fight at the new weight but it’s a name and decent test. Sergey won the WBC Silver title and has only lost to two decent kids.

“Kell doesn’t want to be in this game for too many more years so there’s no point in taking an easy ride. He won’t learn anything from that at this stage of his career. He’s coming back for a test and hopefully it goes rounds.

“They’ve sparred so Kell will know what he’s like. I’m pretty sure I saw them both spar years ago, Kell had the edge from what I remember. It was a tough spar but Brook had the advantage in every department.

“I think it’ll either be a late stoppage or go the distance. Rabchenko knows Kell’s his golden ticket and might be a little cagey. It’s a massive opportunity for him and catapults him into the mix. If I’m honest, Kell will have too much for him. His speed, accuracy, counter punching should be too much for him.

“There’s some big fights for Kell out there – with or without World titles. The Charlo brothers are great fighters, Liam Williams I think would be a barnstormer and of course Amir Khan. If Khan does go ahead, I just hope Kell stands his ground a little and they can meet at a catchweight. I wouldn’t like to see drain himself anymore and it’s not as if Khan hasn’t gone up in weight. I’m sure Khan would make some serious money like the Canelo fight and it’s a fight the fans still talk about.”