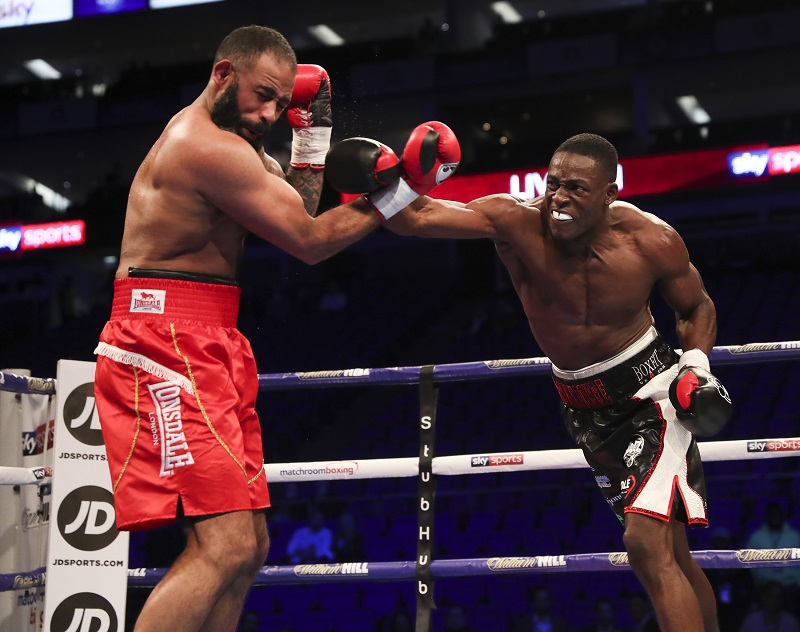 Richard Riakporhe is expecting an easier night’s work when he makes the first defence of his WBA Inter-Continental Cruiserweight title against Belfast’s highly-touted Tommy McCarthy at the East of England Arena on Saturday March 2, live on Sky Sports in the UK and DAZN in the US.

The undefeated Dillian Whyte-mentored Londoner produced a stunning comeback to stop the previously unbeaten Sam Hyde in an epic battle at the Manchester Arena in November and is fully confident of making a successful first defence of the World ranking title next week.

“I’m feeling good going into this fight as I believe Sam Hyde is a better opponent than Tommy McCarthy,” said Riakporhe. “That’s meant as no disrespect to Tommy as he’s a fighter that I’ve watched a lot of and have admiration for. I remember watching the Commonwealth games back in 2010 and he looked pretty decent then.

“He’s got a good skillset and a solid background, but I believe that this is my time now and the momentum is in my corner. I’ll do anything to win and to keep on winning. There’s no way I’m overlooking Tommy as every fight is a huge risk and anything can happen, but I’ve got the bit between my teeth and I’ll be prepared come fight night.”

With one eye seemingly set on British Champion Lawrence Okolie, Riakporhe hasn’t let a potential clash with his fellow Londoner disrupt his focus when preparing for McCarthy, but the Walworth man couldn’t resist speaking about the current Lonsdale belt-holder.

“Lawrence Okolie has the British title at the moment and I believe that would be a good fight for me in the future if he still has the belt. I was focusing on individuals at one point in my career, but I soon realised that despite making noises, a lot of people don’t really want to fight you. I’d rather just focus on the titles right now, so I can progress in my career and get the experience that I need.

“I’d like the Okolie fight down the line for sure. We’ve been close to fighting twice but it doesn’t sound like he wanted it. Granted he’s ahead of me with the belts and in the pecking order but a couple of wins and why not? He must be shying away from it for a reason.

“Having watched a few of his fights Okolie has issues with movement. I train out in Cuba quite a lot, working on my lateral movement so that mixed with my punching power I think will cause him big problems.

“It’s a good division at the minute with the likes of Craig Glover coming through. Win this on March 2 and I want them all over the next year or two, what’s the point in holding back? I would like to box overseas at some point as well. I want to carry on getting experience for the big day one day, which I know is going to come – and that’s for a World title challenge.”

Riakporhe vs. McCarthy is part of a huge night of boxing in Peterborough.

Jordan Gill headlines his first show as he goes for his second pro title in a WBA International Featherweight clash with Mexico’s Emmanuel Dominguez.