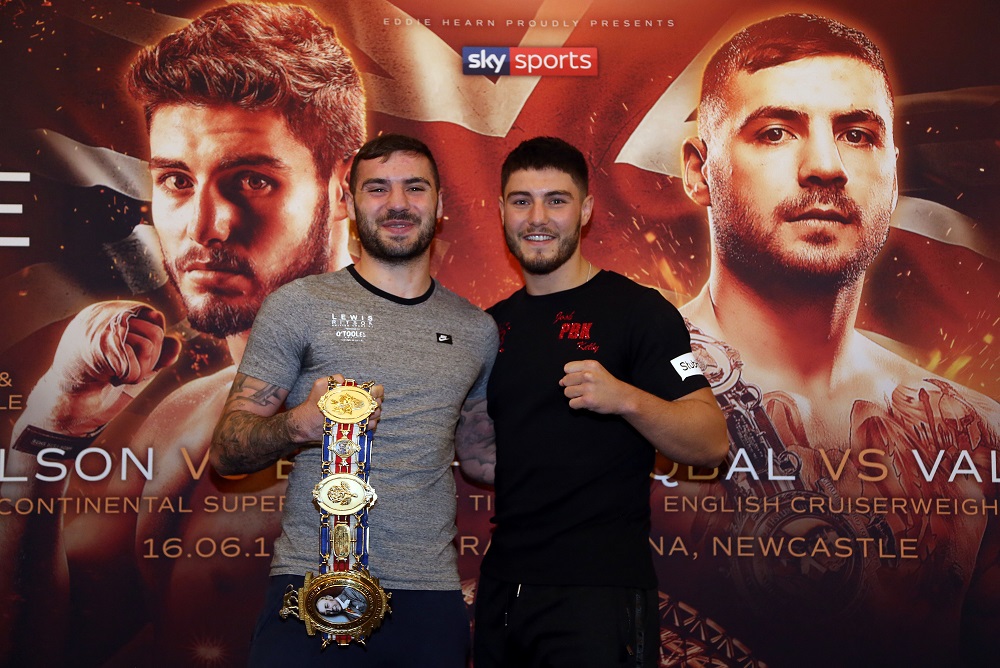 Ritson And Kelly Co-headline In Newcastle

Ritson is aiming to capture the coveted Lord Lonsdale for keeps in what has been a stunning reign as British ruler, landing the crown in October by stopping Robbie Barrett in the tenth round in Manchester before the Newcastle ace displaying his awesome power with a first round demolition against Joe Murray in February and coming out on top in a two-round shootout with former champion Scotty Cardle at The O2 in March.

Hyland Jr is the mandatory challenger for Ritson’s title and the unbeaten Belfast star will be confident of taking the title home having tasted title glory himself in 2017 landing the IBF European strap at home in June with a first round KO over Adam Dingsdale and then defending it against Dublin’s Stephen Ormond.

Kelly landed his first pro title at Principality Stadium in Cardiff in March, beating former IBF World champion Carlos Molina to claim the WBA International Welterweight title in just his sixth pro fight. The Team GB Rio Olympian is one of the hottest properties in world boxing and the Sunderland star now aims to bag his second strap against Australian George, who makes the second defence of the title he landed in November 2016 in his first fight away from Australia.

There’s a stellar card in support of co-headliners as former World champion Stuart Hall challenges former World title challenger Gavin McDonnell for the WBC International Super-Bantamweight title. Hall has been chasing a rematch with McDonnell’s twin brother Jamie after falling to the Doncaster man in 2011, two years before he landed the IBF World Bantamweight title. There’s added spice to the fight as Darlington’s Hall also looks to gain revenge for gym-mate Gamal Yafai who McDonnell beat in a career-best performance in Sheffield in March to land the title he defends in Newcastle.

Josh Kelly: “It’s great to be fighting on a massive bill in the north east. when you are from here, you are fighting from day one, you don’t get the big opportunities that there are elsewhere so it’s great to bring the boxing back. Lewis and I are doing great things and I know the other north east boys on the bill are going to entertain so I can’t wait for a big night and the first of many here. Boxing brings the north east together, I can’t see the crowd being split, the fans are going to get behind us all and big-time boxing hasn’t been up here for a while and I feel now it’s the time to bring it back and the Metro Radio Arena is going to go off on June 16.”

Lewis Ritson: “It’s been a rollercoaster from the Barrett fight to now, three good performances and hopefully a fourth to come on June 16 in front of my home fans. Paul is unbeaten and he’s definitely my toughest test to date. But I’ll be ready with my great team behind me, he’s confident and so am I, our styles will gel so that should make for a great fight for the fans. I want to go all the way to the top. You need a bit of luck in this game but hopefully I can get past Paul, who is a good fighter and one that I am not looking beyond.”

Gavin McDonnell: “It’s a massive fight. Stuey has been looking for revenge over my twin brother and he’s been asking for that fight for a long time, but this is the nearest he’s going to get and I know he’ll bring his A-game and that’s all I want. I am after big fights that people want to watch and this gets the bit between my teeth and another step towards a World title fight – Eddie has said that if I come through this he will deliver another shot at a World title and that’s all the motivation I need. When you are on the journey you don’t believe that you are as good as you are, but I genuinely believe I can win a World title. I’ve had a close one with Vargas but it might have come a bit too soon. I didn’t think it at the time but looking back on it now, I think I’m more prepared and I’ve learnt so much. In boxing, you can be so close only for it to all be taken away, that’s what is driving me on and this time I will 100 per cent take my chances against Stuey and beyond.”

Stuart Hall: “When the fight was mentioned I thought ‘I’ve been chasing Jamie for years so this might be the closest I get to a rematch’ so I jumped at the chance. Gavin and I know each other and we’re quite friendly really, we know what each other is about. Gavin’s on a great run, he just had a good win over my gym-mate Gamal and I think I have got the tools to beat him in a great fight. I think Super-Bantamweight is really going to suit me. In the Paul Butler fight I did a lot of things wrong, it’s mad to say that I’ve been in the game this long and I am still learning things. I’ve changed a few things and let’s see if it works on the night.”

Charlie Edwards: “This is a great fight and one I’m really looking forward to. I’ve been wanting to fight Anthony since he had that great fight with Jamie Conlan and it’s a fight that I’m very confident in showcasing my skills. I believe he’s made for me, he needs someone to stand there, ‘you hit me, I hit you’ – so I’m going to give him a boxing lesson in front of his home crowd. The last year has been a bit frustrating with fights falling through so I’m buzzing to be back in a big fight.”

Anthony Nelson: “I’ve been out for a while, semi-retired, just sitting back and seeing what’s going on. I’m back now with a comeback fight on Saturday and then straight back into a big fight with Charlie. That’s the sort of fight that I want to be in and I think I deserve to be in. I’ve proved myself in my last couple of fights that I belong at that higher domestic level so it’s a massive opportunity. These sorts of chances don’t come around that often and if you don’t take them they may never come again.”

Eddie Hearn: “It’s fantastic to be back in the north east and this is a brilliant card from top to bottom with five excellent title fights.

“We’re back here in a big way and I’m really excited about this bill. Every time you come to a place like Newcastle you feel like the city really wants you to be here and you want big shows with the Sky Sports cameras – it feels like a Belfast or a Liverpool, it feels that the city is ready for a great night of boxing and that’s what we’ve delivered.”

Tickets are on general sale now from the Metro Arena at www.metroarenaonline.co.uk, on 0844 493 6666 or in person from the Metro Radio Arena Box Office. Please note venue facility and booking fees will apply