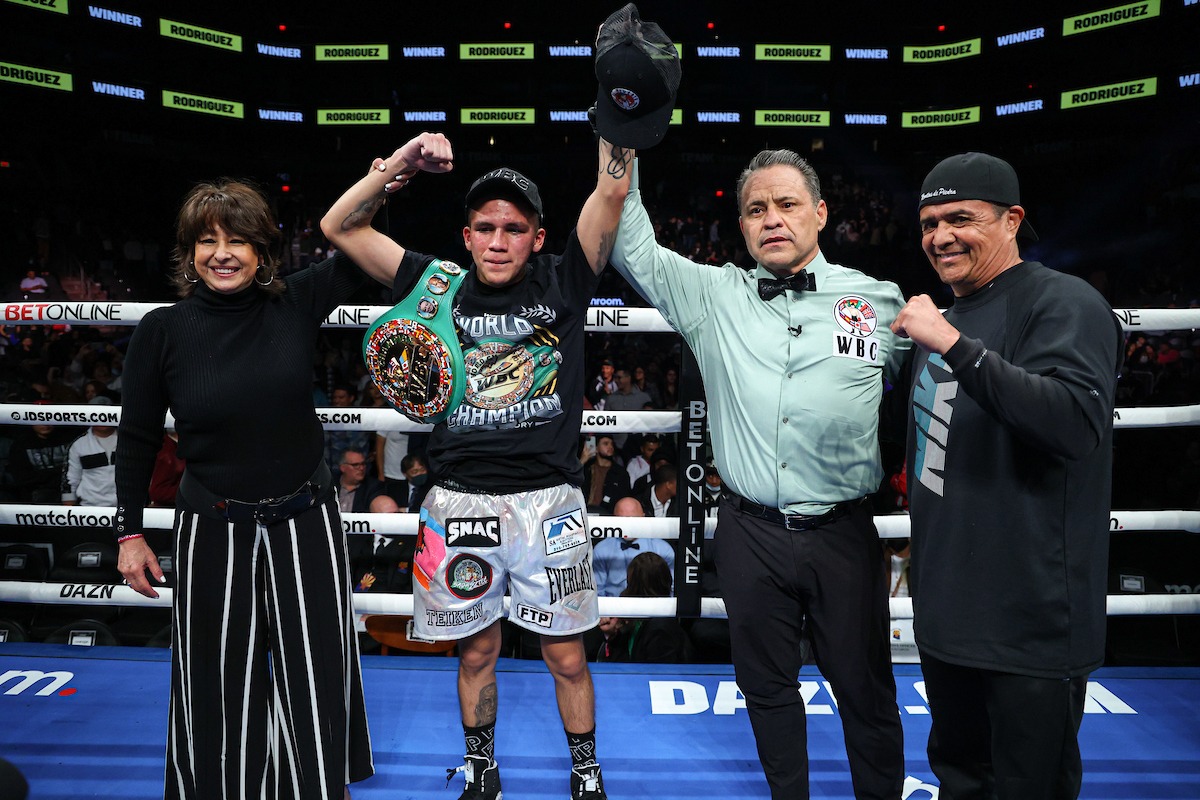 Jesse Rodriguez put on a clinical display to win the WBC World Super-Flyweight title against Carlos Cuadras at the Footprint Center in Phoenix, Arizona

Rodriguez (15-0 10 KOs) lived up to the promise that had many pundits calling him the young fighter to watch in 2022 and entered his first ever World title fight against former ruler Cuadras (39-5-1 27 KOs) as a replacement for the unwell Srisaket Sor Rungvisai.

‘Bam’ showed no signs of the task being too great despite moving up two weights for his first World title battle and indeed first scheduled 12 round action, and proved the point in the third round, with a peach of an uppercut floored Cuadras in the third round.

The Mexican, who was looking to regain the title he held in 2014-16, kept Rodriguez honest with his experience and power, but the 22 year old showed dazzling footwork and unique angles to consistently clip Cuadras and stepped on the gas to drive his victory home at the end, taking the win 117-110, 117-110 and 115-112 on the cards and becoming the youngest World ruler and first born in the 2000s.

He brought out a Jesse Rodriguez I didn’t know was in me, I’m so happy.

“That was a tough ass fight,” said Rodriguez. “He brought out a Jesse Rodriguez I didn’t know was in me, I’m so happy.

“I knew it was going to be a tough fight, he’s a true warrior, I thought I was going to get him out of there but he’s so strong.

“I stuck to the game plan, used my angles, but in the fifth round I knew he wasn’t going to go so I stayed composed and did my work.

“I feel good at this weight so I will stay here for now but if I get a good fight at 108lbs or 112lbs, maybe I’ll get the winner of Chocolatito vs. Martinez, who knows – I’m just open to the best fights.”

Jamie Mitchell (8-0-2 5 KOs) impressed in the first defense of her WBA Bantamweight title against Carly Skelly (4-1-1), landing a dominant fourth round stoppage win. Skelly hit the canvas hard in the final seconds of the opening round, and Mitchell repeated the trick at the end of the second. Somehow, the Briton made it back to her corner and through a third round, but a barrage in the fourth scrambled the senses one time too many and the referee ended proceedings – Mitchell’s right hand could be a real weapon at 118lbs.

“It was cool, my first defense and my most precious fight as a pro,” said Mitchell. “Shout out to Claressa Shields for getting the win in the UK tonight, we had great sparring in the build-up so thank you to her for that. She’s truly the GWOAT and an inspiration.

“If you are going to run at me, I’m going to stop you in your tracks and that’s what happened.

I am only going to get better, we train all year round, people are sleeping on me but I’m going to slowly wake them up.”

Raymond Ford (11-0-1 6 KOs) defended his WBA Continental Featherweight title with a controversial split decision win over Edward Vazquez (11-1 3 KOs). Ford was defending his title for the second time but started slowly against the Texan challenger, who was full of intent from the off. Ford grew into the fight towards the end and finished strongly and held onto his title with cards of 96-94 Vazquez, 98-92 Ford and 97-93 Ford.

Fernando Diaz (11-1-1 3 KOs) and Lorenzo Smith (10-1 8 KOs) shared ten entertaining rounds at Flyweight that did both their reputations no harm. Smith clipped Diaz with a left hook to put him down in the fifth, and the action heated up as the fight headed to it’s conclusion, with Diaz getting on top of the hometown man in the eighth but Smith fired back in the ninth and both men let everything go in the final round – and with scores of 96-93, 96-93 and 95-94, Diaz got the nod for the win.

Khalil Coe (2-0-1 2 KOs) recorded a dominant second round KO win over Dylan O’Sullivan (1-1) to put the disappointment of a draw last time out behind him. A big uppercut floored O’Sullivan with a minute to go in the second round, and Coe unloaded on the Tennessee man who had no answer for ‘Big Steppa’s’ barrage.

Elijah Garcia (10-0 9 KOs) recorded the ninth stoppage win of his career in front of his hometown crowd, with Antonio Hernandez’s (6-12-2 4 KOs) pulling their game fighter out of harm’s way after three rounds of action.

The opening bout of the night saw local Heavyweight Adam Stewart (13-1-1 8 KOs) winning every round of six and scoring a knockdown in the last to see off Alvin Davie (6-3 5 KOs).

Aaron Aponte’s (5-0 2 KOs) first fight under Matchroom against Louis Jourdain (2-1 1 KO) ended in a shut-out win for the ‘Alien King’. 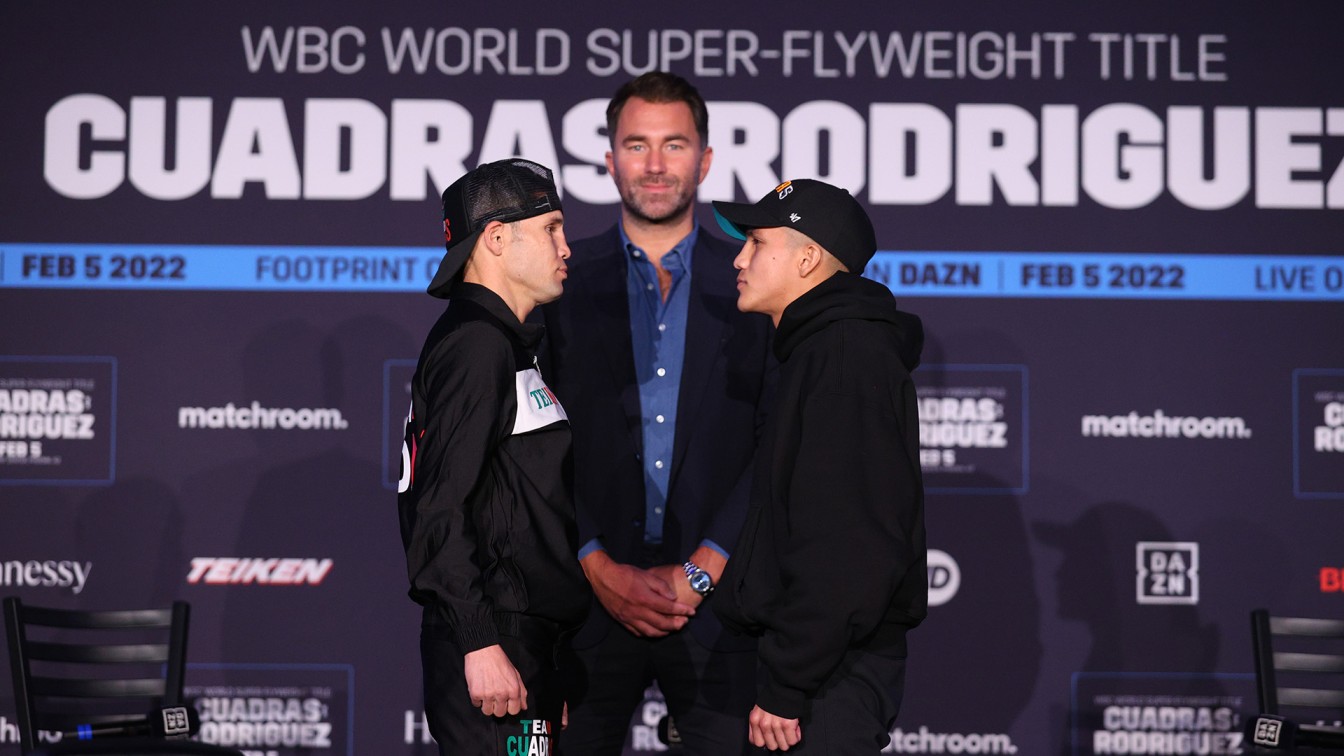