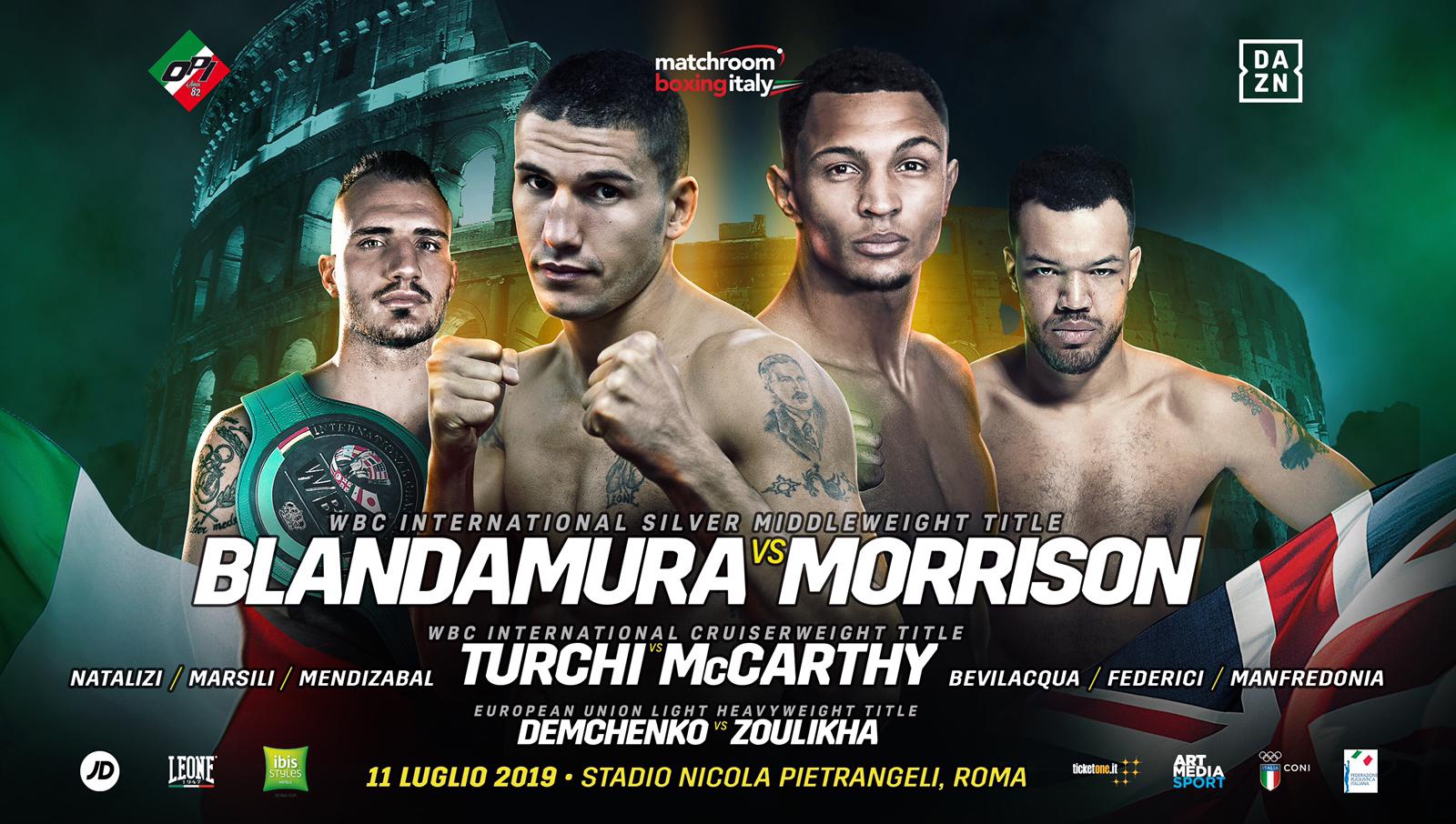 Italy’s fast-rising Cruiserweight star Fabio Turchi will make the first defence of his WBC International title against Tommy McCarthy at the Stadio Nicola Pietrangeli in Rome on Thursday July 11, live on DAZN.

Turchi (17-0, 13 KOs) blitzed Finland’s Sami Enbom in one round to land the WBC title at the Tuscany Hall in Florence in April. The ‘Stone Crusher’ lived up to his nickname by flattening Enbom 74 seconds into the opening round with a devastating left hook to the body.

It was the southpaw’s second consecutive stoppage victory after he dominated and halted former Commonwealth Champion Tony Conquest to retain his WBC International Silver title in November, and the 25-year-old hopes that another early finish will put him within touching distance of a shot at World honours.

McCarthy (14-2, 7 KOs) was stopped in the fourth round of his WBA Inter-Continental title clash with heavy-hitting Londoner Richard Riakporhe in Peterborough earlier this year but the Commonwealth Games silver medallist returned to winning ways with a third round KO win in his native Belfast last month.

Eddie Hearn, Managing Director of Matchroom Boxing said: “Fabio Turchi is quickly establishing himself as the new poster boy for Italian boxing and on July 11 at the Stadio Nicola Pietrangeli in Rome he can take another step towards a shot at the Cruiserweight World title. I’m excited to be involved in my first promotion in Rome after the overwhelming success of our opening shows in Florence and Milan with our friends at Opi Since 82 and DAZN.”

Salvatore Cherchi, President OPI Since 82 said: “We are delighted to return to Rome for the latest instalment of our exciting partnership with our friends at Matchroom Boxing and DAZN at the beautiful Stadio Nicola Pietrangeli. Boxing fans are in for a treat on July 11 with three important championship fights at the top of the bill and a host of local talent on the undercard. This will be a brilliant night of boxing and one not to be missed!”

“After the success of the events in Milan and Florence, we are proud to land in the capital, in one of the most evocative sports locations in the world, with another evening dedicated to the great international boxing,” affirms Veronica Diquattro, Executive EVP Southern Europe of DAZN. “Over the last months, we have worked hard to bring more people closer to this discipline and the event in Rome confirms our desire to continue on this path and keep giving to all fans moments of incredible emotion.”