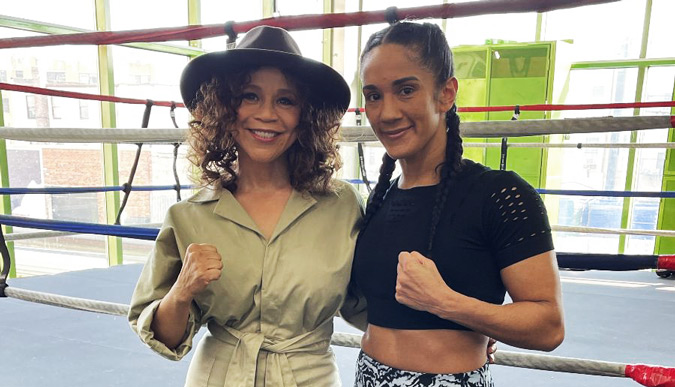 Rosie Perez: I’ll be in tears when Serrano headlines MSG

Popular actor Perez has been a long-time supporter of Serrano, her fellow Brooklynite and proud Puerto Rican, and the ‘Do The Right Thing’ star is thrilled that the seven-weight World champion will be one half of the first ever all-female headline fight at the vaunted Manhattan boxing Mecca.

Ahead of the bout, Serrano opened her training camp and welcomed young people from the Garden of Dreams Foundation and SCO Family Services. Amanda, along with Perez, welcomed the group before Serrano displayed her training routine and welcomed 12-year-old Jamiyah Lee from Bed-Stuy into the ring for one-on-one instruction. Radio City Rockette, Taylor Shimko was also in attendance to learn boxing techniques from the 33 year old – and Perez is proud to see Serrano getting the big night her hard work has been leading towards.

It’s just so exciting. I’m so happy for her. She’s going to rock The Garden.

“When someone says Amanda Serrano, I think of a champion. I think of a young woman who is dedicated to her sport. Who’s been knocked around outside the ring in regard to lesser pay, who’s going to have her moment of her career come April 30 at Madison Square Garden.

“Rosie has been in my corner from the very beginning,” said Serrano. “She’s a proud Boricua, Latina and she is just a great supporter for any female athlete. She is a huge boxing fan, and she has always encouraged me to be the best person I can be and the best athlete. When I found out where we were fighting and how much we were making I knew she was smiling and rooting for us and supporting us.”

Katie Taylor and Amanda Serrano are set to make history in an epic battle for Taylor’s undisputed Lightweight title at Madison Square Garden on Saturday, April 30 live on DAZN.

Years in the making, the biggest fight ever in women’s boxing between the pound-for-pound #1 and #2 fighters of the world is one that will not only make boxing history, but women’s sports history. MSG has hosted thousands of fights through its illustrious years, beginning more than a century ago on July 17, 1882; now, 140 years later, this matchup finally marks the very first time two female fighters are headlining a boxing event at the iconic venue.

Taylor and Serrano’s historic fight tops a huge night of action, with former World champions Jessie Vargas and Liam Smith meeting in a crossroads Super-Welterweight battle and there will be an undisputed champion crowned at Super-Middleweight when Franchón Crews-Dezurn and Elin Cederroos clash.