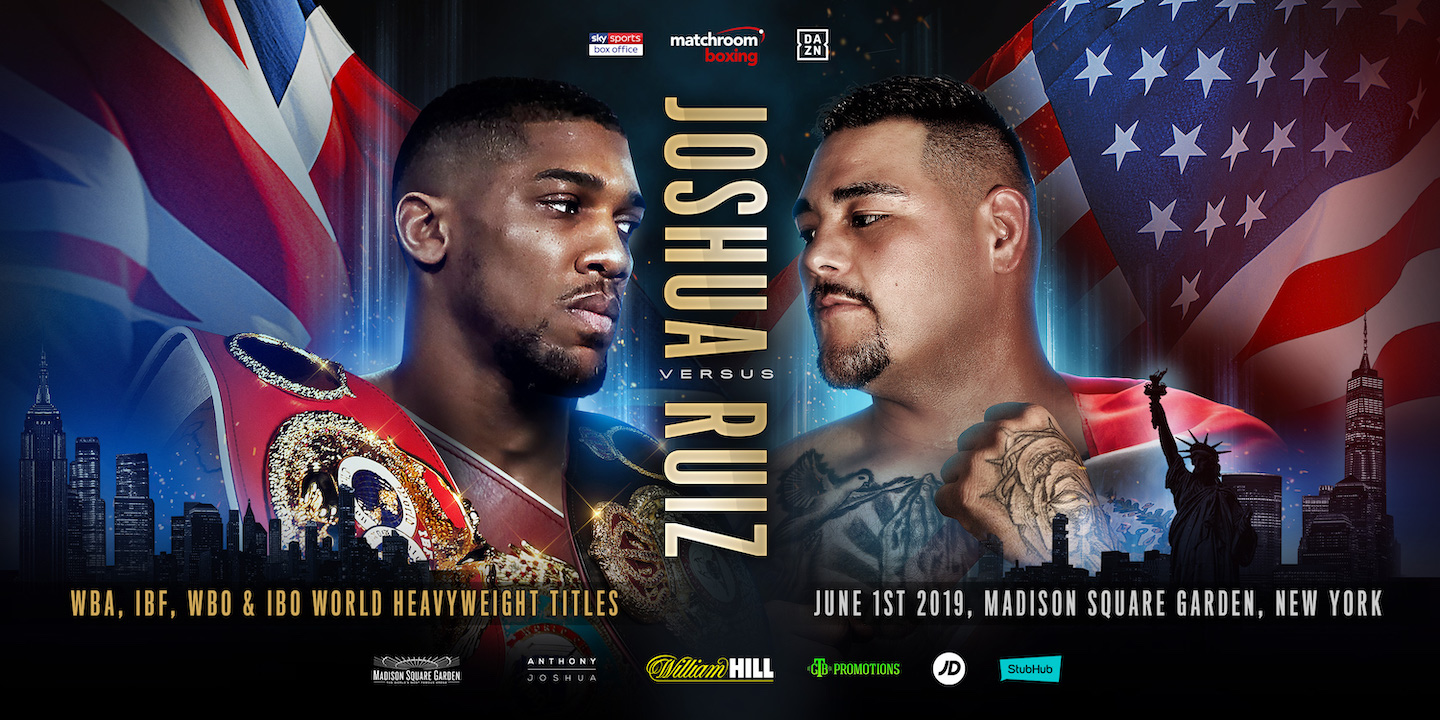 Andy Ruiz Jr. has landed a dream World title shot at Heavyweight king Anthony Joshua OBE on Saturday June 1 at Madison Square Garden in New York, live on DAZN in the US and on Sky Sports Box Office in the UK.

Ruiz (32-1 21 KOs) can become the first ever Mexican Heavyweight World champion when he meets AJ at the vaunted Manhattan boxing mecca and comes into the bout in fine form. The 29 year old recorded his 21st KO win on his 32 fight ledger when he forced the retirement of Alexander Dimitrenko after five rounds of their clash in Carson, California ten days ago.

The Californian-based Mexican is in his second World title tilt having pushed Joseph Parker to the limit for the WBO crown in the Kiwi’s Auckland hometown in December 2016, being edged out by the finest of margins via majority decision.

Joshua (22-0 21 KOs) defends his IBF, WBA, WBO and IBO crowns for the second time, as his eighth World title fight lands on his hotly-anticipated American debut after KOing Alexander Povetkin at Wembley Stadium, London in September. That was the second dramatic KO win for the Londoner in the national stadium of his hometown, with today’s announcement coming two years and one day after his epic victory over former undisputed World ruler Wladimir Klitschko.

Ruiz has a golden opportunity to stop Joshua’s own quest to become the undisputed king dead in it’s tracks, and the challenger believes it is his destiny to stun Joshua and become Heavyweight World champion in the Big Apple.

“The chills – I’m really excited for this fight,” said Ruiz. “There’s nervousness in me, but they’re happy nerves. This is my chance to make history, I want to be one of those greats like Chavez, Tyson, Holyfield, Lennox Lewis. I want to be in that category. Thanks to God for everything that he put in me, I just can’t wait.

“I think being so tall he fights like a big robot. I think with my style, my speed, my movement, I don’t think he’s fought anybody like me. It’s going to be a whole different ball game. All the guys that he’s fought, they usually run around from him. I don’t think he’s good going back. I’m going to bring the pressure, the speed, and the combinations to him.

“When I do pull out this win, everything is going to change. I’m going to bring the titles back to Mexico, it’s going to mean everything. I’m going to be able to change my whole family’s lives; my life and all my kids. It’s a win-win situation right now, but the main thing is to win the fight and make history.”

“Ruiz is a different kind of challenge but one I embrace’” said Joshua. “We have worked in the boxing gym week on week and whomever is put in front of me at Madison Square Garden on June 1 will be dispatched in style. The rent will be collected.”

“After a tricky week I am delighted to announce Andy Ruiz Jr. as AJ’s opponent for his US debut at MSG on June 1,” said promoter Eddie Hearn. “People talk about fighting AJ, some even have to fill their bodies with PEDs to try and beat him up, but very few genuine fighters step up and take the challenge.

“When we selected the opponent, I wanted someone with fire in their heart, someone who genuinely believed that they can win and become World Heavyweight champion. Andy showed that desire.

“In my opinion, this is a tougher test than Jarrell Miller. Andy punches harder and is much faster – this is going to be a war. Andy brings Mexican heart but he will meet the best Heavyweight in the world on June head on at the Garden. Do not blink!”

“Credit to Andy Ruiz Jr. for taking on this challenge. He said he wanted to fight for the World Heavyweight championship in 2019 and immediately backed up his words when given the opportunity,” said Joseph Markowski, DAZN Executive Vice President, North America.

“We’re also very happy to be working with a true champion like AJ, who told us he would fight anyone put in front of him – even on short notice. Clearly, he is a man of character who is committed to his craft, as well as his partners and the legions of fans traveling in from the UK to watch his US debut.”

“When I saw Anthony in camp last week his message was clear, ‘Line them all up!’ He really wants to dominate the division and Ruiz Jr is the first man in his way.

“It will be an absolutely thrilling night on Sky Sports Box Office as AJ makes his US debut in the iconic Madison Square Garden – and the incredible Katie Taylor bids to become the undisputed world Lightweight champion!”

Joshua and Ruiz clash on a huge night of action at Madison Square Garden with Irish sensation Katie Taylor clashing with Delfine Persoon for the undisputed Women’s World Lightweight championship – with more undercard fights to be announced shortly.