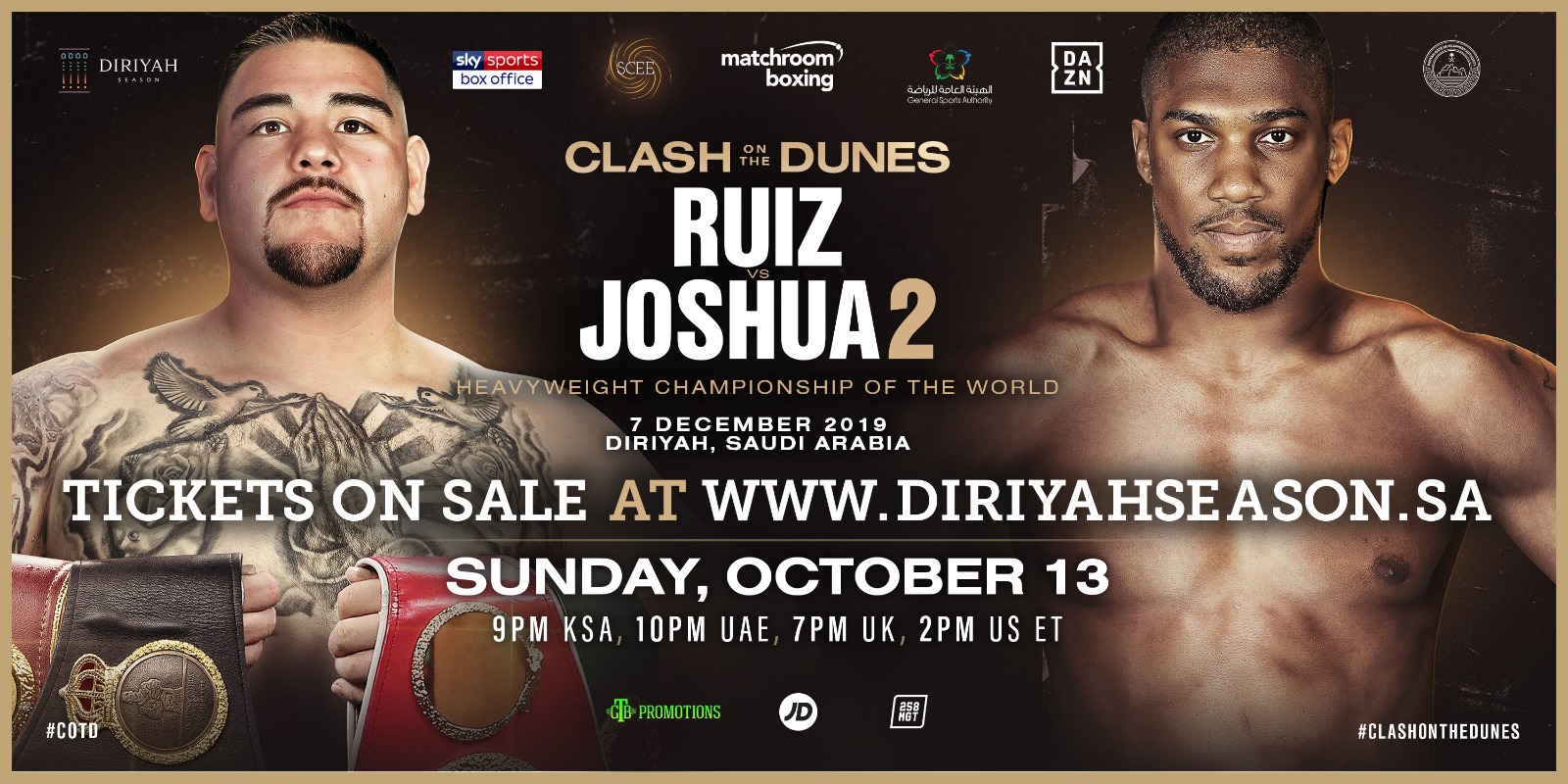 Boxing fans from around the world can flock to the biggest fight of the year – the Clash on the Dunes in Diriyah, Saudi Arabia – to support their heroes Andy Ruiz Jr and Anthony Joshua after the Kingdom launched new super-fast tourist visas.

On December 7, in the UNESCO heritage site of Diriyah – known as the land of kings and heroes – Anthony ‘AJ’ Joshua will attempt to recapture belts taken from him by Andy ‘Destroyer’ Ruiz Jr in Diriyah Arena, a purpose-built arena for 15,000 fans on the night.

Tickets for this incredible showdown go on sale this Sunday, October 13, at 9pm KSA time (10pm in UAE, 7pm in the UK and 2pm US) and are available at www.diriyahseason.sa.

It will be the first-ever World Heavyweight Title fight ever to be staged in the Middle East and forms part of the month-long ‘Diriyah Season’, a spectacular season of world-class sport, global entertainment, and culture,  officially launched on Sunday night at a glittering ceremony in the ancient city, the birthplace of modern Saudi Arabia on the outskirts of Riyadh.

This follows the announcement in recent days that travellers from 49 countries across the world can now secure 90 day tourist visas online in just seven minutes to attend the festival. For more information go to visa.visitsaudi.com.

Boxing promoter Eddie Hearn said: “This is the biggest boxing match on the planet, and it will be taking place in one of the most unique venues ever.

“We already know there is a great passion for boxing in the Kingdom, but AJ and Andy will want their fans to come and support them, from across the region and from the UK and the US and Mexico.

“It’s great news that these tourism visas have been launched, that’s a big step forward for the country and it means that boxing fans wherever they are can come witness an unmissable night. This fight will go down in history as one of the greats.”

Due to the unique venue, being staged outside of the UK or the US, the fight has already seen parallels drawn in the media to some of the most iconic fights in history, such as Muhammad Ali’s fights against George Foreman – “the Rumble in the Jungle” – and Joe Frazier – the “Thrilla in Manila”.

“Athletes and audiences can expect to be knocked out by the passionate reception this event will enjoy in the Kingdom, and now, with the launch of tourism visas for 49 countries, it has never been easier for fans from around the world to come be part of history.”

HH Prince Khaled bin Abdulaziz Al Saud, Chairman of SCEE, said: “This is a historic moment for Saudi Arabia welcoming the first World Heavyweight Championship. As a nation we have started to pave the way for becoming a global player in the sports and entertainment industry and we have witnessed a real appetite for the boxing sport.

“This is the biggest boxing fight that has taken place in the region to date and we are bringing it to Saudi Arabia on December 7 – the world is watching us and we promise to deliver an unparalleled experience. SCEE are a proud partner of the GSA bringing Clash on the Dunes to Diriyah Season, 2019.”

Tickets for all of Diriyah Season’s spectacular events and entertainment will be available online at www.diriyahseason.sa with Formula E Tickets on sale now, Clash On the Dunes tickets on October 13, and Diriyah Tennis Cup on October 26. Tickets for other events as well as season long tickets will be announced soon. Follow Diriyah Season’s news and announcements on the official social media pages on twitter and Instagram @diriyahseason.