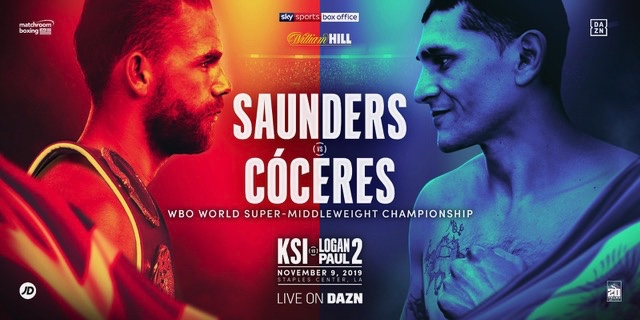 Saunders Faces Coceres On Us Debut

Billy Joe Saunders will make the first defence of his WBO Super-Middleweight World title against undefeated Argentinian Marcelo Esteban Coceres on the blockbuster KSI vs. Logan Paul 2 show at the STAPLES Center in Los Angeles on Saturday November 9, live on DAZN in the US and Sky Sports Box Office in the UK.

Saunders (28-0, 13 KOs) became a two-weight World Champion with a shutout points win over Shefat Isufi in Stevenage earlier this year, outclassing his Serbian opponent over 12 rounds to add the WBO 168lbs crown to his collection.

The Hatfield star is on the verge of securing mega fights with the elite fighters of the 160 and 168lbs divisions after signing a promotional deal with Eddie Hearn and Matchroom Boxing and knows that a slip up against Coceres would be disastrous.

Coceres (28-0-1, 15 KOs), from San Jorge, is undefeated in 29 fights since turning professional in 2012 and the 28-year-old has won numerous titles at Super-Welter and Middleweight, most recently picking up the WBO Latino and WBA Fedebol Middleweight titles.

“I’m really looking forward to fighting in LA and making my professional American debut and my first fight under the Matchroom umbrella on DAZN and Sky Sports,” said Saunders. “Marcelo Esteban Coceres is a tough, world-class operator, an unbeaten fighter and I certainly feel the pressure to outperform him and look good on such a massive platform. Training is going very well, I just have to stay focused and get the job done.”

“I can’t wait to see Billy Joe shine stateside and what a huge platform to do it,” said Eddie Hearn. “He is right in the mix for all the big fights in 2020 but he can’t slip up here and if he can make a statement against Coceres then I truly believe he will land a monster in the first half of next year.”

Adam Smith, Head of Sky Sports Boxing, said: “We are very excited to have the outstanding Billy Joe Saunders back on Sky – and what a night to make his re-appearance! This is a real chance for our growing sport to reach a new audience with world class fighters in action before the YouTube stars KSI and Logan Paul clash. Bring on November 9th!”

General sale tickets are available to purchase now via www.axs.com