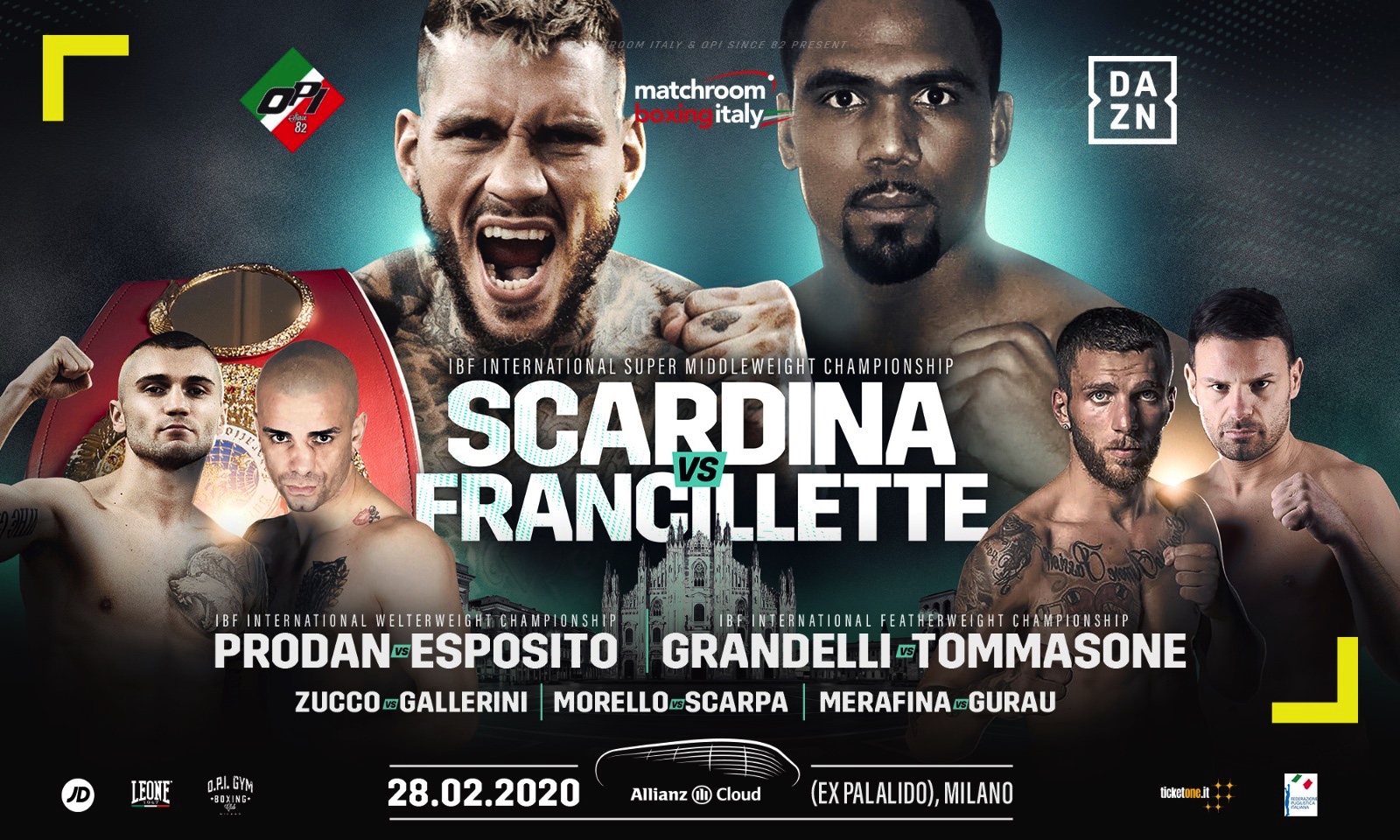 Rising star of Italian boxing Daniele Scardina continues his march towards a World Title shot when he makes the third defence of his IBF International Super-Middleweight title against Andrew Francillette at the Allianz Cloud in Milan on Friday February 28, live on DAZN.

The Allianz Cloud has proven to be happy hunting ground for Scardina (18-0, 14 KOs), with ‘King Toretto’ earning shutout points wins over Alessandro Goddi and IIias Achergui in a hugely successful 2019 that saw the 27-year-old remain undefeated and on course for a World Title opportunity.

Ranked in the top 15 in the world with the IBF, WBO and WBA, Scardina will be looking to start his 2020 campaign with a bang when he meets Monaco’s Francillette (21-2-1, 5 KOs), who challenged for the EBU European Middleweight title in his last contest.

Elsewhere on the undercard, Dario Morello takes on Andrea Scarpa in an eight round Welterweight contest, Ivan Zucco and Filippo Gallerini meet over six rounds in the Super-Middleweight division, Milan’s undefeated Riccardo Merafina squares off with Vadim Gurau in a Super-Middleweight contest and Palermo Super-Welterweight Cristian Cangelosi makes his professional debut.

Eddie Hearn, Managing Director of Matchroom Boxing, said: “I can’t wait to go back to beautiful Milan for our first event of the year following a hugely successful 2019 with our friends at OPI Since 82 and DAZN that saw us promote seven shows in Milan, Rome, Tuscany and Trento. The Italian cards continue to grow in strength and someone that has benefited from the resurgence of boxing in the country is rising Super-Middleweight talent Daniele Scardina. I’m excited to see what 2020 has in store for ‘King Toretto’ who has proven to possess real star quality.”

Christian Cherchi of OPI Since 82 said: “We are very happy to announce our first event of 2020 with Matchroom Boxing and DAZN at the Allianz Cloud – the home of boxing in Milan. The show will present a triple header of title action featuring the popular Daniele Scardina and Maxim Prodan, the exciting derby between Francesco Grandelli and Carmine Tommasone and a top undercard featuring some of the best rising talent in Italy.”

Tickets will be available to purchase soon on ticketone.it