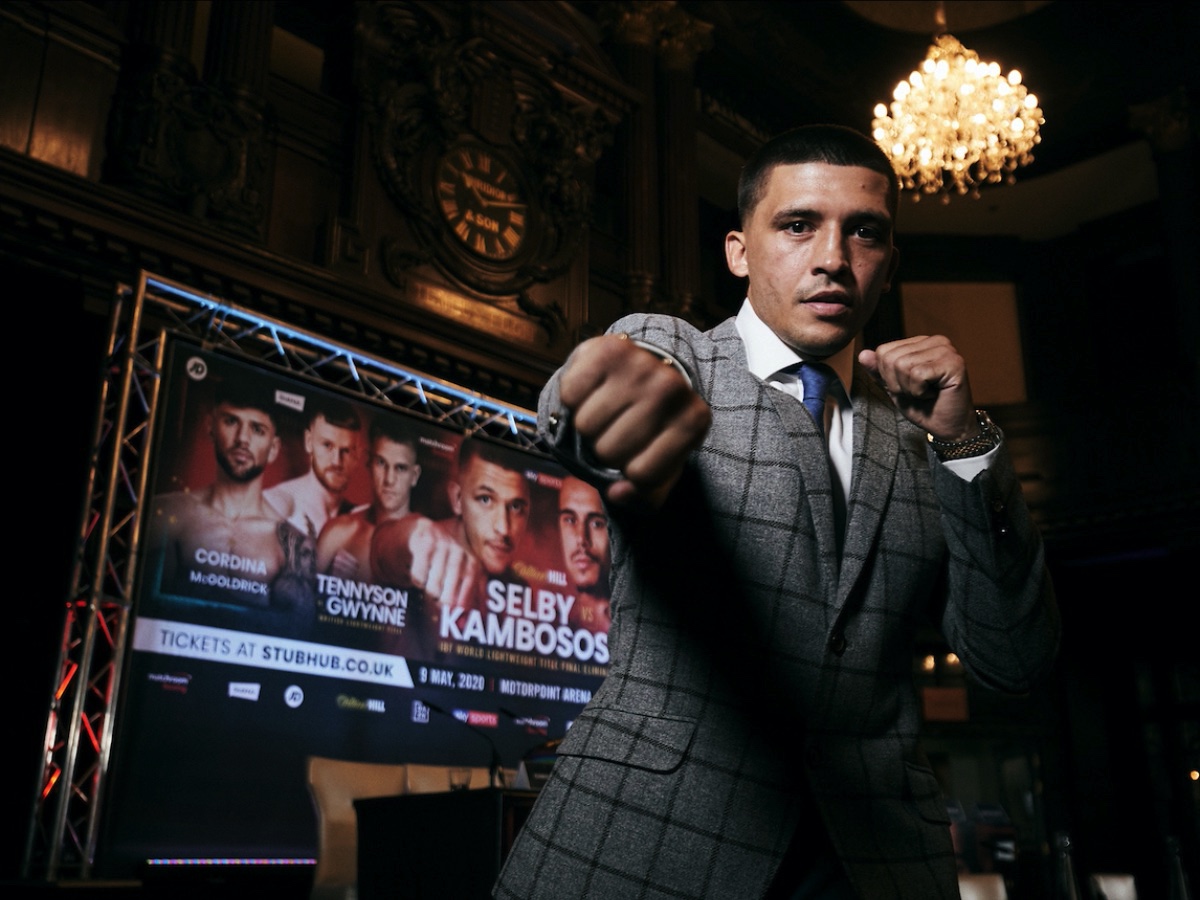 “Well good afternoon everyone. Thank you for turning out today on this beautiful Welsh afternoon. It’s a pleasure to be back, it really is. I think anytime that you return to a city that loves their boxing and is pleased to see you, it’s always nice. We see it in Newcastle, April 4th, fans now really embracing that city as a regular stop on the Sky Sports calendar and I think there’s no reason why Cardiff can’t do the same.

“It’s six years since we’ve been to the Motorpoint Arena, it’s much too long. Since then, Joe has boxed at the Ice Arena and of course Anthony Joshua has boxed twice at the Millennium Stadium but there’s no reason why the International Arena in Cardiff shouldn’t be a regular stop on our schedule. Obviously that schedule since we came six years ago, Lee headlined that card, Anthony Joshua boxed on that card I believe against Dorian Dorch, and look what he’s gone on to achieve since then.

“Returning now, we’ve got so many great fights on the card, I think the timing for us is perfect on May 9th to return, of course live on Sky Sports and also on DAZN across America as well. It’s a big card and a big night of boxing, particularly the headline fight in Lee Selby. It’s a great fight against George Kambosos. If you don’t know Kambosos go and watch him – lightning fast hand speed with great power. We excused him from coming over form Australia for this press conference today. He’s deep in camp now and going to be flying to Miami as well before he flies over here.

“This is such an important fight for the career of Lee Selby. A great champion at Featherweight, I saw on Sky the other night they replayed that great fight against Evgeny Gradovich when he won the IBF World Title at The O2, he went out and defended his championship in America, now moves up two weight divisions and just has to win this fight to be guaranteed another shot at the IBF World Lightweight championship. Of course, at the moment he will be the Mandatory Challenger for the winner of Vasiliy Lomachenko against Teofimo Lopez which is one of the biggest fights in world boxing. This is a massive fight for his career and an opportunity to try and become a two-weight World Champion if he can beat Kambosos on May 9th.

“I’m glad to be back here in Cardiff fighting in Wales. The Welsh fans have been crying out for big time boxing to be back in Wales. I’m glad and I’m proud to be the main to bring it back. I’ve got a tough task ahead of me. George Kambosos Jr is a very good fighter, unbeaten in 18 fights and he can punch and he can box. He’s a pressure fighter. I think he’s the seventh unbeaten fighter that I’ve boxed in my career and the third Australian, and I beat both of those.

“I shared the ring with Kambosos Jr in the Wildcard gym, we sparred a few rounds and he’s a good fighter. In those couple of rounds I took enough away to know what I’ve got to do in the fight to beat him. One thing I’ve got over Kambosos Jr is experience. He’s had 18 fights, I’ve had maybe 18 or 17 title fights. I have a wealth of experience, I’ve had six Word Title fights. I’m hoping that’s going to help me win.

“That would be a massive fight. I know I’d be a big underdog against each of those fighters but I believe that if I box to the best of my ability on the night, I can beat anyone. I should have been a Lightweight a lot earlier in my career. After winning the World Title and defending it that’s when I should have stepped up to Super-Featherweight and then Lightweight, but there was always those big fights looming, and being a champion the last thing you want to do is give up your title, I’d rather lose it in the ring.”

“First of all I’d like to say thank you to everyone for turning up. Thanks to Eddie, Matchroom, Sky and DAZN for bringing another show back to Cardiff. Some of the names that have been chucked in the hat, they’re not easy runs. I’m looking to push on towards a World Title at the end of this year or maybe next year. It’s about time now that I step up to the plate. I believe in myself and what Tony does, and hopefully you do too. I want to get some of these big names under my belt. They’re very very tasty and if one of them does come off then everyone is in for a real treat.”

“This is a massive fight for my career. Gavin is a real tough lad. We’re both two come forward fighters and I believe that our styles are going to clash. It’s going to be a good war and I feel like this is a must-win fight for me. I’ll be ready come fight night.

“Not cutting that extra few pounds is really helping my performances, I’m a lot stronger at the weight which makes a big difference. You can’t look past Gavin because he’s a big tough guy but down the line I want another World Title shot. Get this one out of the way and I’ll start chasing down that World Title.”

“I’d just like to thank yourself and Matchroom for giving me the opportunity. It was a brilliant experience fighting at The O2 against Joe. I took a lot of positives from it. I know that come May 9th I’ll put all of the wrongs right and I’ll be bringing that belt home with me back to the Valleys. This has got a war written all over. I don’t like to take a backwards step and I know Tennyson just comes forward. I know he’s a massive puncher and I’ve got to use my boxing ability. With Joe it was a totally different fight, I had to go forwards, he’s a lot quicker but Tennyson just holds his feet and just likes to bang away.”

“Thanks for getting me this fight and thanks to Nathan for taking it. As you know, a few people wouldn’t take the fight, so I’m looking forward to it. I travelled to Liverpool and beat Craig Glover in his backyard and I’ve got to do it again against a great Welshman. He’s 14-0, you just have to look at this table to see how much talent the Welsh can produce. You go back through the years as far as Barry Jones, Steve Robinson, Joe Calzaghe, Enzo Mac and all of those sort of fighters.

There’s no overlooking Nathan Thorley, he may not be well known but it’s a massive opportunity for him and I’ve been in that position against Richard Riakporhe. I know how hungry you can be in that position so I’ll prepare diligently for it. You’re in the sport to achieve things and if I’d gone away and boxed in six rounders back home in Bournemouth in non-televised shows, it’s not why you do it as a kid and not what you dreamed of as an amateur.”

“Gary gave me the call so I said yes. I’m looking forward to it, I know Chris is a good fighter. I’m fighting on Saturday so this fight is kind of at the back of my mind at the moment, but I am looking forward to May 9th and meeting Chris in that squared circle. The division is massive at the moment, it never used to be, but now there’s plenty of fights out there for me that I want to take and will take.”

“I was disappointed in myself in my last fight. I was disappointed in my performance. Now I’m fully focused on improving and moving forward and looking ahead to an exciting year. I just wanted to say thank you to Eddie Hearn, Matchroom Boxing and MTK for keeping the faith in me. You learn a lot when you lose. It wasn’t a good learning experience at the time but I’ve taken the positives from it. It was a blessing in disguise I think.”

“I’m stepping up to eight rounds and we’re looking for a step up in opponent. I’ve been wanting that for my last few fights but obviously it’s up to Tony and my team. Once I do get a step up in opponent you’ll see the best John Docherty. I’m very confident in my ability, I’ve just got to listen to Tony Sims all of the time. I’m sparring with John Ryder and Felix Cash, so I know the level I’m at and I know when I do step up and fight somebody half decent that’s going to give me rounds you’re going to see the best John Docherty and hopefully more knockouts.”

“I’m looking forward to coming back to my boxing. I’ve teamed up with Tony Borg down in Newport and I’m really working hard down there. I was out of boxing for a bit, I just had a baby and I spent a bit of time out. I’m looking forward to getting going again. Hopefully I’ll get down to Middleweight and have a few fights down there because maybe I’m a little bit small at Super-Middleweight. I think I got away with eating what I wanted and being small for the weight. I was quite strong at the weight but then on fight night my opponents would rehydrate a lot bigger than me. So if I can get to Middleweight that would be the perfect weight for me to be at.”