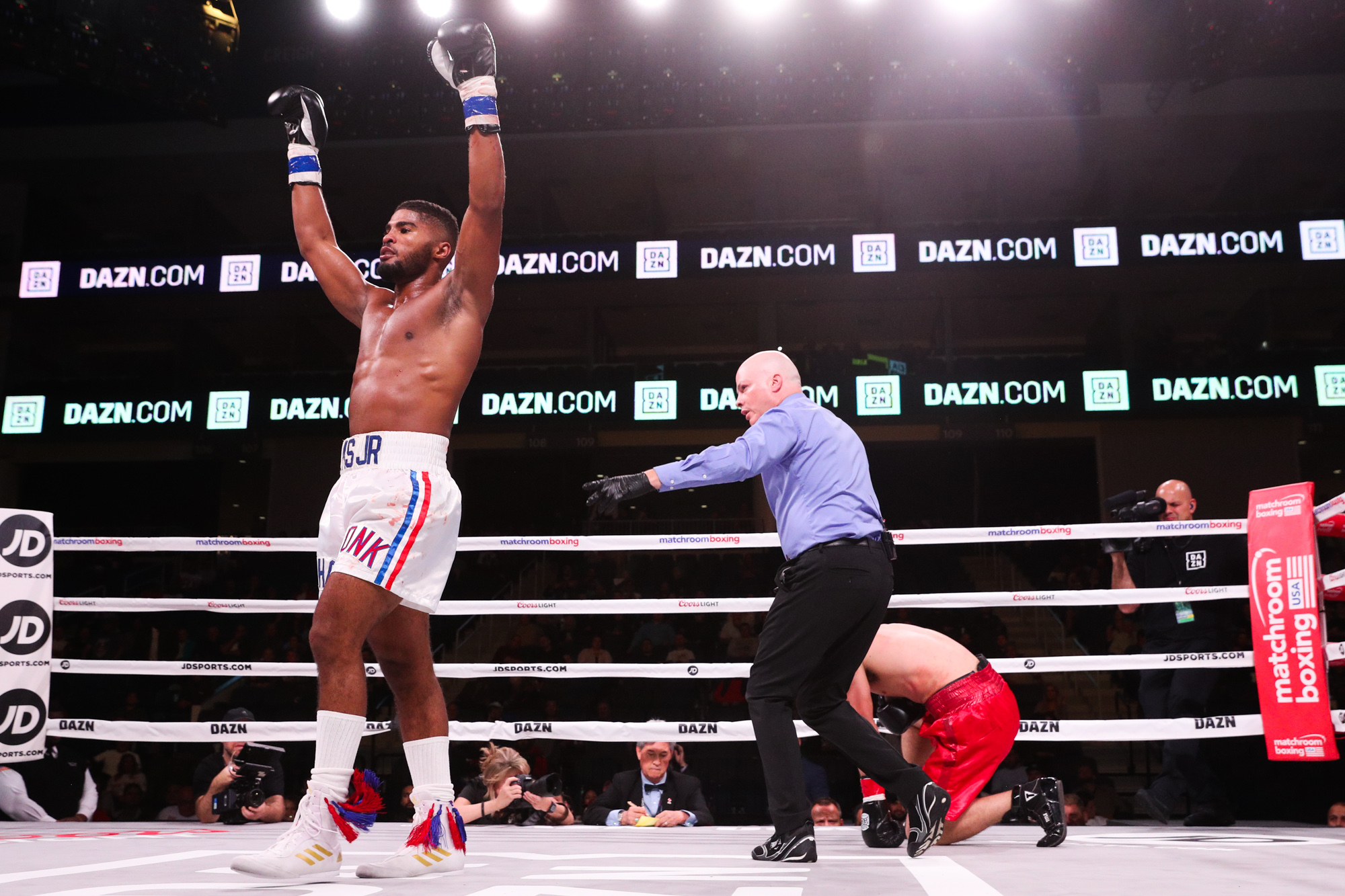 The Magician returns to action in LA on April 26

Anthony Sims Jr. admits he’s a work in progress – but he wants to challenge for titles at the end of 2019 as he returns to action at The Forum in Inglewood, LA on Friday April 26, live on DAZN in the US and on Sky Sports in the UK.

Sims Jr (18-0 17KOs) impressed on British soil once again in his last outing, a sixth round stoppage of Mateo Veron in Peterborough, England to further extend his unbeaten record.

That was a first scheduled ten round contest for ‘The Magician’ and the longest amount of time he’s spent in the ring in his 18 wins since turning pro back in April 2014.

The 24 year old is settling into the Super-Middleweight division having dropped down from 175lbs and that’s where he wants to pick up his first pro hardwear later in the year – before the Indiana man looks at bigger names and prizes in 2020.

“I am a work in progress,” said Sims Jr. “I’ve been working on my jab, letting my hands go and getting loose. My record says that I am power-puncher so I am trying to get back to boxing as you can’t just go out there and expect to blast everyone away.

“I’d like some sort of title fight by the end of the year but the key is making sure I am ready because once you get to that level, there’s no turning back. I haven’t had to dig it out and grit my teeth in the 10th, 11th and 12th rounds yet, so I need to go deeper in fights before we get there, but it’s coming, those big fights could be ready for me next year.

“I’m only 24, I’m growing into things still. The champions out there like Callum Smith, Chris Eubank Jr are in their late 20s with plenty of experience. I’ve had a lot of fights but I am still young.

“Chris and I go back, we’re boys. We sparred when I was 18 and it was a great sparring session, it’s a fight I can see in the future. I am a Super-Middleweight. I’m stronger at 168lbs, it’s the best place for me.”

Jessie Vargas (28-2-2 10 KOs) is on the hunt to become a three-weight World champion and he faces fellow two-weight World king Humberto Soto (69-9-2 37 KOs) in a crunch clash for their elite level aspirations. The Soto clash will be Vargas’ first fight with new trainer Freddie Roach, and it’s a busy evening for the Hall of Fame coach as Scott Quigg (35-2-2 26KOs) also looks to move to world honors in a new weight, targeting a Featherweight World title shot in the second half of the year.

Unbeaten Super-Middleweight talent Anthony Sims Jr is set for a breakout year and will fight for his first title on the bill. Sims (17-0 16 KOs), who is in action in Peterborough, England on Saturday night live on DAZN and Sky Sports, clocked three stoppage wins in the second half of 2018, and will look to convert that momentum in style in first the UK and then in LA.

Shakhram Giyasov (7-0 6KOs) and Diego Pacheco (2-0 1KO) landed wins in Tijuana, Mexico this weekend and will fight on the bill, while Eddie Hearn’s latest addition to his blossoming stable of young USA talents, Houston’s Austin ‘Ammo’ Williams, will make his pro debut on the card.