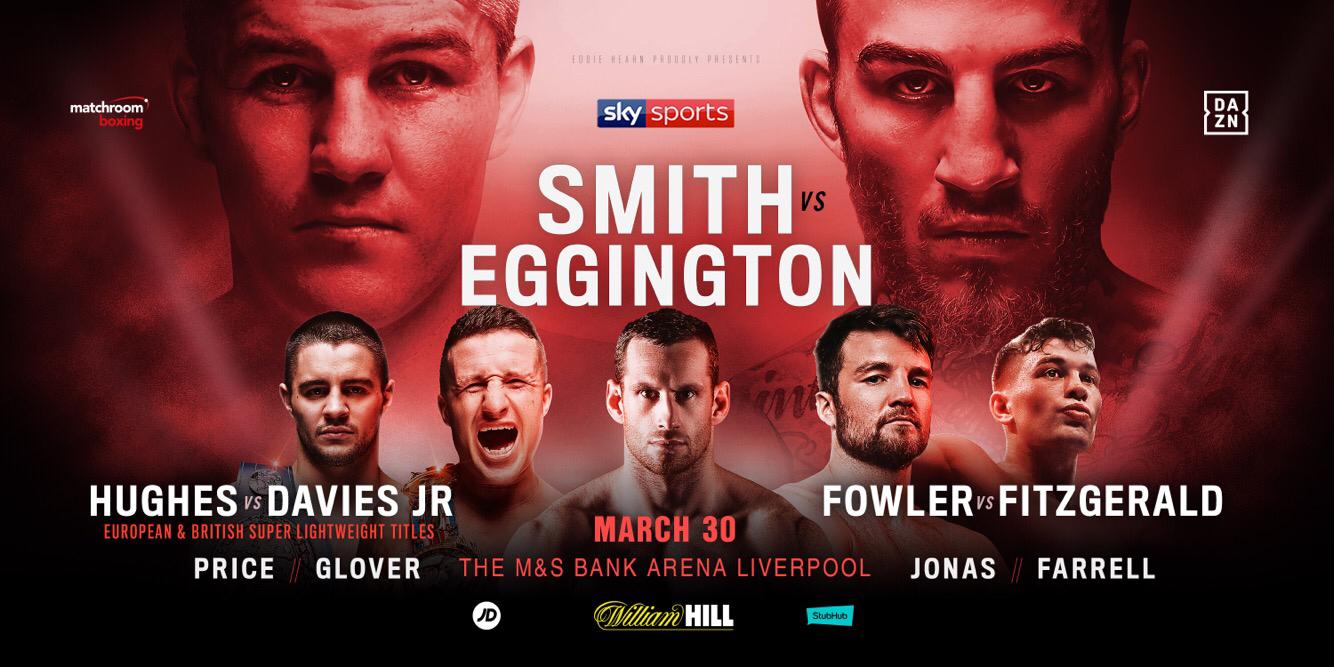 Liam Smith will make his long-awaited Liverpool homecoming on March 30 when he takes on Sam Eggington at the M&S Bank Arena, live on Sky Sports in the UK and DAZN in the US.

Smith became Liverpool’s first World Champion in over 20 years when he stopped American John Thompson to claim the WBO Super-Welterweight crown at the Merseyside arena in 2015 before making a second successful defence of the title against Predrag Radosevic at the same venue in 2016.

‘Beefy’ hasn’t fought in his home city since and is itching to get back under the lights as he sets about winning back a version of the World title he bravely lost against pound-for-pound star Saul ‘Canelo’ Alvarez in Texas in 2016, and in doing so becoming the city’s first two-time World Champion.

Former European Welterweight Champion Eggington knows he is fighting for his career after suffering a shock stoppage defeat to Tanzania’s Hassan Mwakinyo at Arena Birmingham in September.

‘The Savage’ was preparing to face former World ruler Brandon Rios at Wembley Stadium when he was wiped out by the dangerous African, but the Stourbridge man believes a win against Smith would put his name back in the mix for title action at 154lbs.

“It’s a very good fight for me,” said Smith. “I’ve done a lot – and I mean a lot – of sparring with Sam. You know what you are going to get with him. He comes to fight. You aren’t sitting on the edge of your seat wondering what he’s going to bring. You know exactly what he’s bringing.

“It’s the same with me and you know this is going to gel into a good fight. We will meet in the middle. It’s what we both do. I do feel, though, I do everything better than him and beyond. I feel if I ‘turn up’, you will all see what I mean.

“I am a big way back into boxing for him. And as we’ve sparred a lot, whatever confidence he can draw, he will try and draw some from that.

“I’ve got to do a proper job on Sam and a proper job is what I truly believe I will do. Having those little gloves on are so different to sparring and with those 10oz gloves on, I am massively confident I will find those gaps. Everything I throw will hit Sam and I just feel I have too good a variety for him to carry on going.”

Super-Welterweight rivals Anthony Fowler and Scott Fitzgerald put their unbeaten records on the line when they meet in one of the most eagerly-anticipated domestic clashes of the year. Preston’s Fitzgerald says he is a “different level” to Fowler’s previous opponents but ‘The Machine’ has vowed to “go through” his former teammate to set-up a mouth-watering clash with British Champion Ted Cheeseman.

Malmesbury’s Hughes will be looking to build on a career-best win after he finally got his hands on the European title at the second time of asking after dominating Andrea Scarpa in Italy. Davies Jnr is looking to take another step up after claiming the British and Commonwealth titles in a bloody and bruising war with Glenn Foot at the Metro Radio Arena in Newcastle last October.

Popular Heavyweight David Price fights in Liverpool for the first time in nearly three years as he looks to make a fresh charge on the Heavyweight division following his recent win over Tom Little at The O2.

“I can’t wait to be back in Liverpool on March 30, I love it there!” said Eddie Hearn. “This is one of the best all domestic cards we have put on in the city – Liam Smith returns from his World title defeat to face the all action Sam Eggington in what will be an absolute war and Anthony Fowler faces off against ex GB teammate Scott Fitzgerald in another crunch 154lb clash.

“The British and European Super-Lightweight titles are on the line for Liverpool’s Robbie Davies Jnr and Joe Hughes and big David Price fights in Liverpool for the first time in nearly 3 years as he looks to make a charge in the Heavyweight division after his recent win at The O2. There’s plenty more action with rising Cruiserweight Craig Glover, Tom Farrell and Natasha Jonas – it’s going to be a busy night and a great event on March 30.”

General Sale tickets are available to purchase via the M&S Bank Arena (www.mandsbankarena.com), Matchroom Boxing (www.matchroomboxing.com) and StubHub at midday on January 23.