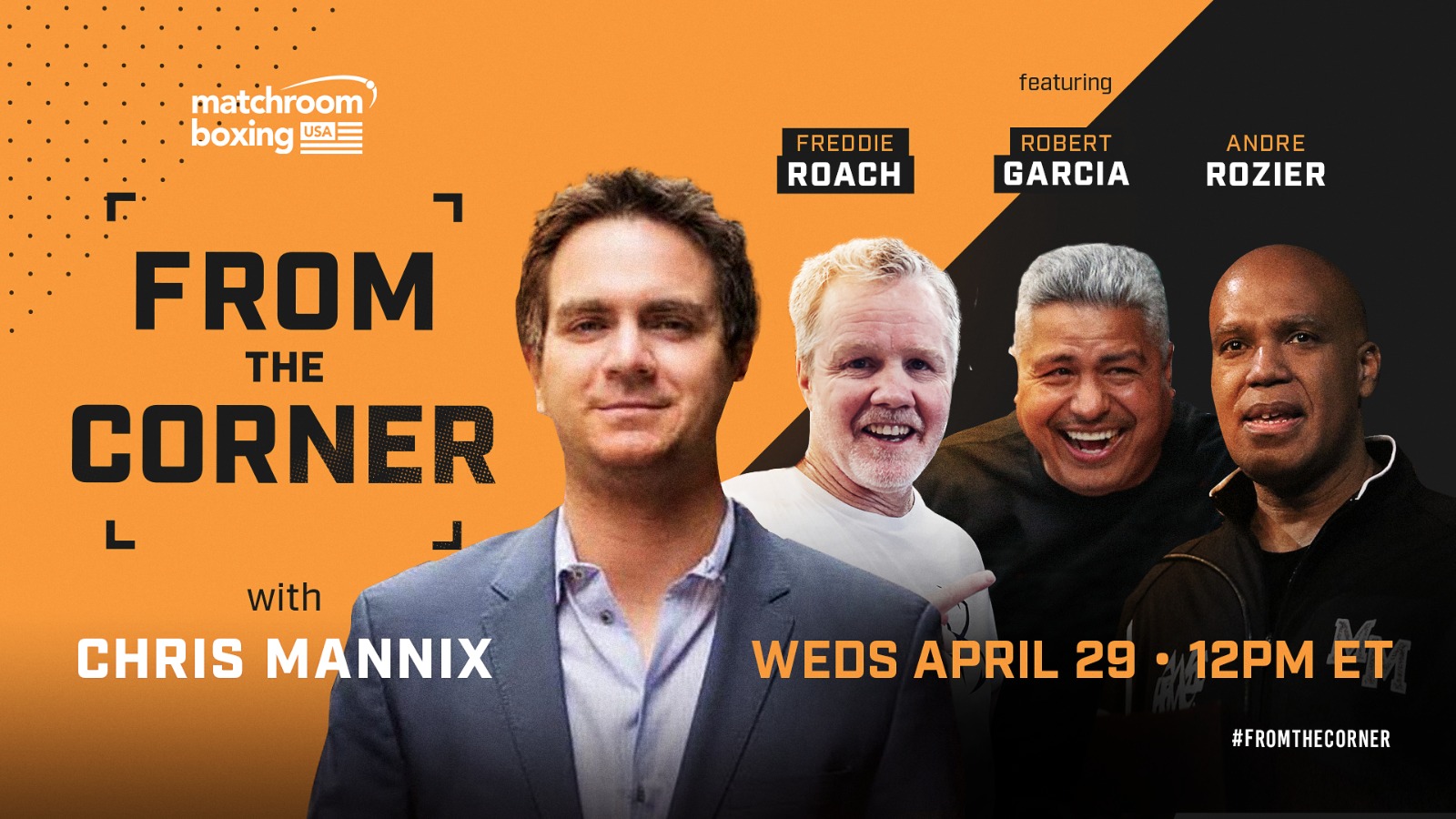 Star Trainers Roach, Garcia And Rozier View The Pandemic ‘from The Corner’

Star trainers Freddie Roach, Robert Garcia and Andre Rozier join Chris Mannix in a new show on Matchroom Boxing’s YouTube channel as they view the COVID-19 pandemic and the return of the sport ‘From The Corner’.

WATCH ROACH, GARCIA AND ROZIER TALK ALL THINGS BOXING WITH CHRIS MANNIX ON ‘FROM THE CORNER’ ON MATCHROOM BOXING’S YOUTUBE CHANNEL NOW!

Boxing has been hit as hard as any sport as fighters kick their heels waiting to hear when they will be back between the ropes, and as the trio of the sport’s elite coaches told Chris Mannix, they know that they have a key role in how their fighters return at their peak.

Roach, Garcia and Rozier chewed the fat with Mannix for over 40 minutes and the group offer their expert opinions:

Garcia: “It’s tough, fighters fight for a living and without having any income coming in they have to look for support elsewhere. There are some fortunate fighters like Mikey Garcia and Manny Pacquiao that are getting big paydays but besides those guys, boxers are going to struggle especially if this goes on for four, five more months, fighters are going to be in trouble.”

Roach: “This has attacked the whole world, we weren’t prepared and it’s hitting us hard, it’s killed all sports. I’ve told my fighters, don’t get caught off guard, be ready. You have to be in shape at all time, because if you get the first call out and you say ‘I’m not ready yet’, that’s not going to go down well with the promoters.”

Rozier: “Maintain cardio, that’s really important. You are in the house, what do you do? You watch TV and you eat, and some of my guys eat and eat and eat. So, I am telling them to make sure they keep then roadwork going, do as much as you can. You’ve been taught everything in the gym already. Do your exercise, shadow box, just work, that’s all you can do right now. You have to be prepared because when we get back to a ‘new normal’, you have to be ready because the first guys that are ready to go will be the first guys to really go.”

On the importance of sparring –

Garcia: “I’ve thought about it and we cannot stop sparring. The guys need it. Like Freddie, I remember the days when I would spar every day, I think three days a week is enough now to get the rounds in. We don’t have to bring outside guys in really with the guys we have in there, but sometimes I’ll call the Wild Card and ask if there’s someone for one of my guys, and sometimes I’ll get the call from the Wild Card to send a guy over there. We won’t really have a problem as all the guys are living, eating and training together so it’s not going to affect us too much. Jose Ramirez always wants to spar Vergil Ortiz, because he gets the best work from him.”

Rozier: “Sparring is the essence of practice. I’m not saying your guys have to kill each other in sparring, but you have to formulate your attack plans, your footwork, your ring generalship and that’s how you gain your experience, by sparring. So, it’s going to be really difficult, the only good thing going on with my crew of guys is that they are so diverse that they can spar with each other, I don’t have to call guys in from outside.”

Roach: “Mike Tyson said to me one day ‘why do I have to spar with three different sparring partners? Can’t we make it fair and have me spar with one guy for the whole day?’ I said, ‘well Mike you know that’s not how it works’ but he tried to convince me! Mike was a character! He KO’d a lot of guys in sparring early in his career, but he wasn’t bad on them later in his career when he was with me. He said to me once, ‘Freddie, you don’t have to get up in the morning and do road work with me, I will do it myself anyway,’ and I said ‘yeah, I am just here to spy on you a little bit and make sure you get up!’”

On boxing behind closed doors –

Garcia: “it’s going to have to happen, like it or not. Boxing is going to change. Jose Ramirez for example told me that he’d rather not fight (without fans) but with things going the way they are going, he’s going to have to, there’s nothing else he can do. He doesn’t like the idea but what else are you going to do? Fighters that have already accomplished so much might be able to retire or those that haven’t been in the sport for long and aren’t making money could consider doing something else if they don’t like fighting without fans, but those that are in the position where the purses are already huge or they are in World title fights, they are going to have to fight, there’s no way they will make that sort of money.

“Having millions of people watching on TV is just not the same as have the live crowd cheering your name, or against you which can motivate you, it’s something boxing needs but we’re going to have to deal with it and teach our fighters how to handle it. The gyms are going to change too, sparring sessions sometimes have lots of people in the gym but maybe that will be just the trainers and the fighters so that they can get used to this.”

Roach: “Gabriel Rosado had a fight in an empty arena in Phoenix and it was really hard to motivate him, we had to push him to fight after the Jacobs-Chavez Jr. fight had emptied the arena. It was unusual but at least he’s had practice at it. It was difficult for him to get his combinations going and get pumped up, there was no crowd just some officials, judges and the cornermen, that’s it – and we’ll have to get used to that for some time because that’s the path we’re on right now.”

Rozier: “Sergey Derevyanchenko and I spoke about it. I asked him about there being no fans and he’s such a nonchalant guy he just said, ‘it’s OK coach, I do what I have to do’. Fighters are going to have to make it work, you can’t say no, you have to fight. You can’t tell a promoter ‘oh I don’t have an audience so I can’t fight’. I’m praying we’ll be back eventually but to get the ball bouncing, we’re going to have to get in the ring in arenas by ourselves and Robert and Freddie and I will be the guys cheering the fighters on from our corners! The guys that are always in swing-bouts will be ready for this big time!”