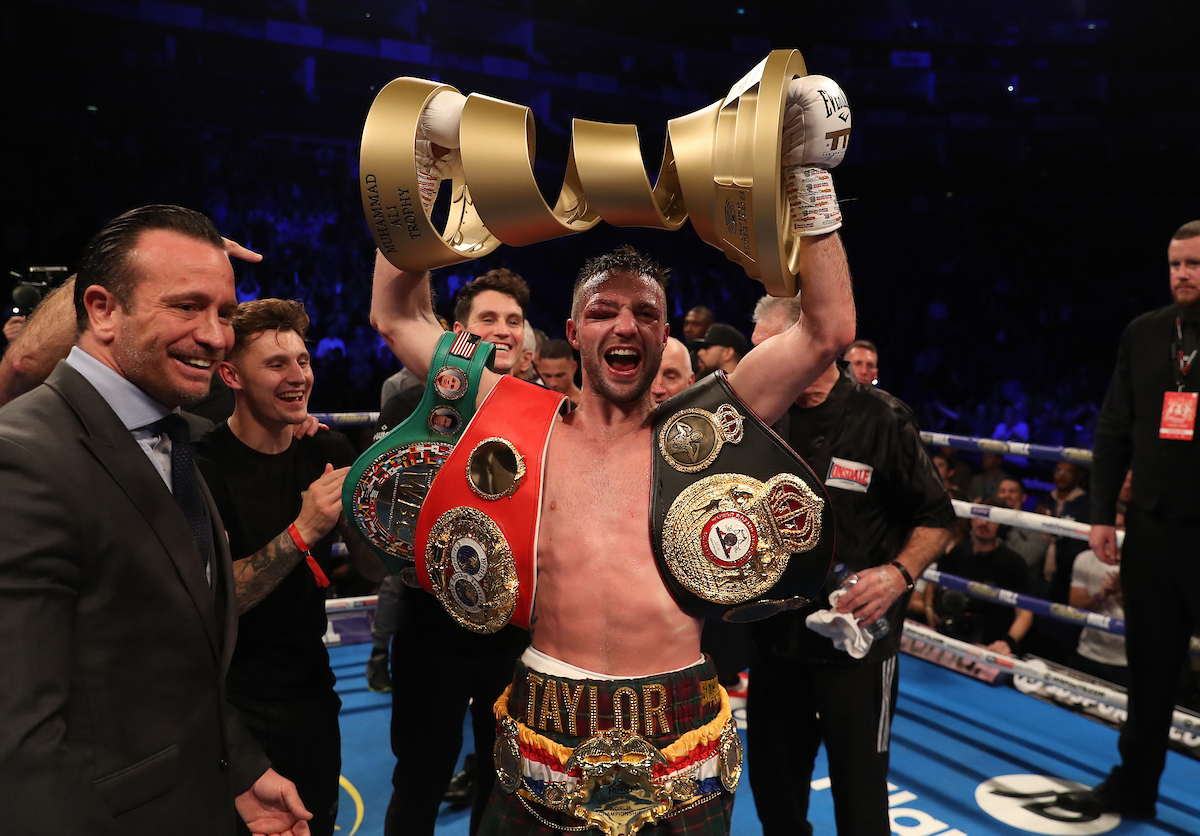 Scotland’s Taylor won a majority decision with scorecards of 114-114, 115-113 and 117-112 to become the only British boxer to currently hold two World Championship belts, also adding the vacant Ring Magazine title to his collection.

It was a thrilling fight that lived up to the hype as the two unbeaten World Champions fiercely contested the right to be named the best 140lbs fighter on the planet. In another fight of the year contender the ‘Tarton Tornado’ earned the Muhammad Ali Trophy with a strong finish.

With his right eye swollen shut, Taylor dedicated his victory to his late father-in-law, who died last month.

“He was here with us tonight and I want to dedicate this to him,” said Taylor. “What a fight. All respect to Regis Prograis, a great fight, great champion, but the best man won.

“The free-flowing boxing, the inside work – I don’t think he quite expected I could switch it up and go to range quite as quickly.”

Derek Chisora pounded David Price to a halt in the fourth round to stay in contention for a big-name Heavyweight fight.

The Finchley favourite overpowered his British rival, a replacement opponent after Joseph Parker’s withdrawal, and the 35-year-old could look ahead to a major bout amidst talk of a potential clash with Oleksandr Usyk.

Price staged a final rally in the fourth, unloading a few defiant right hands before wilting under a short right hook from Chisora, and the towel cam in when he clambered to his feet.

The unbeaten 26-year-old continued his rise towards a World title fight as he halted the previously unbeaten Ngabu with a flurry of ferocious punches in the seventh round.

Lee Selby edged out Ricky Burns via a majority decision in a battle between former World Champions.

Welshman Selby was lighter on his feet and won on two of the three judges’ scorecards to deny Scotland’s Burns in their twelve round Lightweight contest.

Conor Benn produced an explosive stoppage to halt Steve Jamoye in round four of their WBA Continental Welterweight title clash.

The Ilford prospect was deducted a point by the referee for a low blow and responded by upping the pace, and winning the fight moments later with a big left hook.

Austin Williams was taken the distance for the first time in his pro career as he outpointed Miroslav Juna to move to 4-0 (3 KO) on his UK debut while Watford Bantamweight Shannon Courtenay earned a hard-fought 39-38 decision against Jasmina Nad to progress to 4-0 (1 KO).