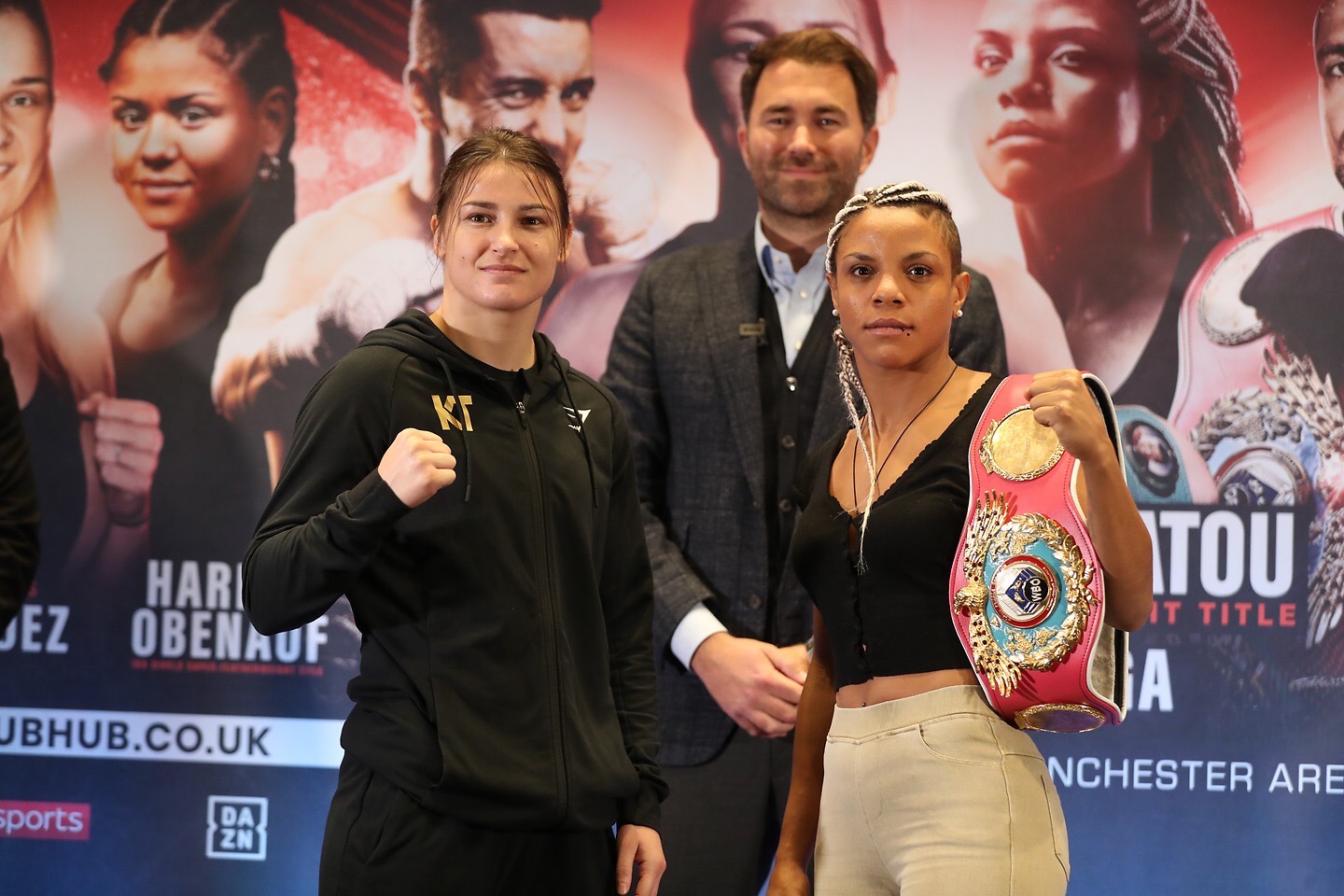 “This is a big night for many reasons, Michael Buffer just touched there on it being the final fight of Anthony Crolla. I think that after the press conference we are going to forget the niceties of the career and memories and concentrate on a very important fight for him on Saturday.

“The career of Anthony Crolla is without doubt one of the great success stories of British boxing and he is genuinely one of the nicest people you will ever meet. He has been an unbelievable ambassador for this city and the sport of boxing.

“This is a must win fight for him and I know that he wants to finish his career with another victory.

“The main fight this weekend is a groundbreaking fight for Katie Taylor who moves up to 140lbs to take on the WBO World Champion Christina Linardatou in a very tough fight after becoming the Undisputed World Champion at Madison Square Garden in June.

“We have a brilliant domestic Middleweight clash between Felix Cash and Jack Cullen as well and all the other fights here that we will be talking about shortly.

“What a wonderful turnout which it always seems to be in Manchester which is a fantastic fight city. We have been coming here for 25 years on Sky and have seen some wonderful events in the Arena.

“When you walk around there is a special buzz in the air before a big event and there will be one or two tears in the eye when Anthony Crolla bids farewell to the sport on Saturday night.

“What a phenomenal career he has had, he always has the tag as being the nicest man in boxing and he really has been. He’s fought long and hard and battled through many things and us at Sky will be looking forward to his swansong in a fight that he needs to win.

“Katie Taylor is a wonderful ambassador for the sport who has a real tough ask moving up in weight to face Christina who will definitively want to hold on to that title.

“What a selection of talent we have on display, the roadshow goes on in one of the most powerful schedules we have had and we cannot wait for Saturday.”

“I have the chance to become a two-weight World Champion and I am very prepared for this fight. I have had a long training camp, the longest one I have had for a professional fight so I am feeling strong.

“These are the kind of challenges that I relish and I’m expecting a very tough fight, she is the Champion and I am the challenger but I am ready.

“I am in there with bigger and stronger girls now but I have put in hundreds of rounds of sparring these last few years and I am prepared for this kind of challenge.

“I have put in a lot of strength and conditioning work and I can’t wait to get in there now. There is a lot of big fights out there for me but I am only focused on Christina at the moment and I have to get past her first.”

“I am always ready and I am not getting out of the gym because I am preparing myself. This is what I love and I am ready for any challenge!

“I can handle everything and will do everything I need to do on Saturday to get the win.”

“Saturday night is so important to me, it means absolutely everything for me to go out there and finish my career in style. I have a lot of respect for Frank and I think our styles are going to gel for a great fight.

“Everyone keeps asking me about emotions and I keep saying the same thing, I am just trying to not think of this as my last fight because otherwise you start fighting with emotions.

“Boxing is a sport where you can’t do that because it very rarely works out well so I am just going to treat it like any other fight. I have had a fantastic camp and I can’t wait for Saturday night.

“There is a lot of things that I will miss about boxing, it has been a huge part of my life and it always will be, this is just the last time I will walk to the ring as a fighter.

“He has go everything to gain and that for me is motivation on it’s own. I want to finish my career on a high and go out in style. I will always have that hunger and that hunger never really leaves you but I feel that you have got to feed it in other ways.

“I will be coaching the kids, I will be spending more time focusing on that and maybe in time, take a stable of fighters on. Everyone on this table loves boxing in one way or another and boxing has been so good for me.

“I am so grateful for what boxing has done for me but now the time is right.”

“I am so excited to fight here in Manchester, a city with a lot of boxing fans. For me it is an honour to fight against a warrior like Anthony Crolla and I am ready for the fight.

“Anthony Crolla is a good boxer with a lot of rhythm and the fight will be a good fight for the fans. I will give this my best and let’s hope it goes right for me on the night.”

“His training camp for this fight has been what it always it, meticulous. He puts 100% into everything and we can’t take our eyes off the ball.

“Frank is a good fighter, he fought for the European title as the away fighter and lost by two points on two judges scorecards. Frank has an awful lot to gain upsetting the party this week.

“The right time to go out is when you are relevant, you don’t want to be a stepping stone for the young fighters coming through. He is going out on his own accord and not because boxing has forced him too. Anthony is getting out at the right time and from a personal perspective it’s a pleasure to be able to finish Anthony’s career with him.

“When fighters become World Champions there is usually splits, people get in their ears, but one word for Anthony Crolla is loyal. He still is going round dropping his tickets off to his fans! To be able to do this last dance together makes me so proud and I think it would be fitting to have Anthony acknowledged in the Queen’s Honours List at the end of this year.”

“I am really looking forward to this fight, it’s a big show and a big event and a lot of people will be watching as I showcase my skills and what I am about.

“He has had one good win against a mediocre opponent and I don’t know where he is getting all this from, he thinks he’s a World Champion!

“This is a big opportunity and I’m going to take it with both hands and I’m just glad that he is here this time! It’s going to be a great fight and I have trained for more than 12 rounds and Felix Cash is going to get smashed!

“He is a good opponent who is probably the best opponent that I’ve fought but he hasn’t found anybody either. We are both hungry for this fight and the best man will win, I am coming home with that belt inside the distance!”

“I have been on Sky shows before in Sheffield and Nottingham but this time it is officially as a Matchroom boxer. I have got a tough test on Saturday night but I have trained hard and I am prepared for a tough ten rounds with Viviane.

“This is the test that I need to take me to the next level for the other World title belts and I have got to beat Viviane on Saturday!”

“I am really happy to be here having been un well for six months and I am super prepared, even more so than for the Natasha Jonas fight. It’s going to be a game of cat and mouse.”

“I always say that I am ready for anybody, I am waiting on Saturday to see what this man can bring to the table. I am coming to fight and so is he so we will see what will happen, the best man will win on Saturday night!”

“I’m not underestimating Joe, I boxed him four times in the amateurs and I know what he’s about. I believe I know what he is going to bring but even if he does decide to change tactics I feel that I have the tools to deal with what he brings and get a good result on Saturday night.

“When they come at me it just makes It easier for me in my opinion and I believe that he is going to come to fight. He is probably hoping he is going to tire me out but it’s not going to happen because I am in the best shape of my life.”

“I’ve been training hard and I am looking forward to taking this opportunity with both hands.

“We have boxed a few times in the amateurs, the last being in the Commonwealth Games in Glasgow but that was five years ago! There is a big jump between the amateurs and the pro’s and I am confident that the pro style suits me better and I can get the win on Saturday night.”

“I am just blessed to be on this show surrounded by so many great fighters. It’s great to be on this card with Katie Taylor who will go down as a boxing legend.

“I just want to congratulate Anthony Crolla on a great career and I am buzzing to get back in the ring at the right time to fight on the undercard of both Anthony Crolla and Katie Taylor.”

“I picked up another win in Italy and now I’m straight back out here three weeks later. I am staying active, getting plenty of fights and looking forward to putting on another performance on Saturday.

“The plan was to stay active up until Christmas and I’ve got a few good fights between now and the end of the year. I look forward to next year and securing bigger fights and picking some titles up.”

“I’ve just turned professional and signed with Matchroom two weeks ago. I am really happy to be on this show and I am happy to perform on such a big stage on Saturday night.

“Being in the gym with Jordan Gill and Anthony Fowler has been great and they have all helped me. I feel like I am ready for the pro ranks and showing what I’m all about on Saturday night.”