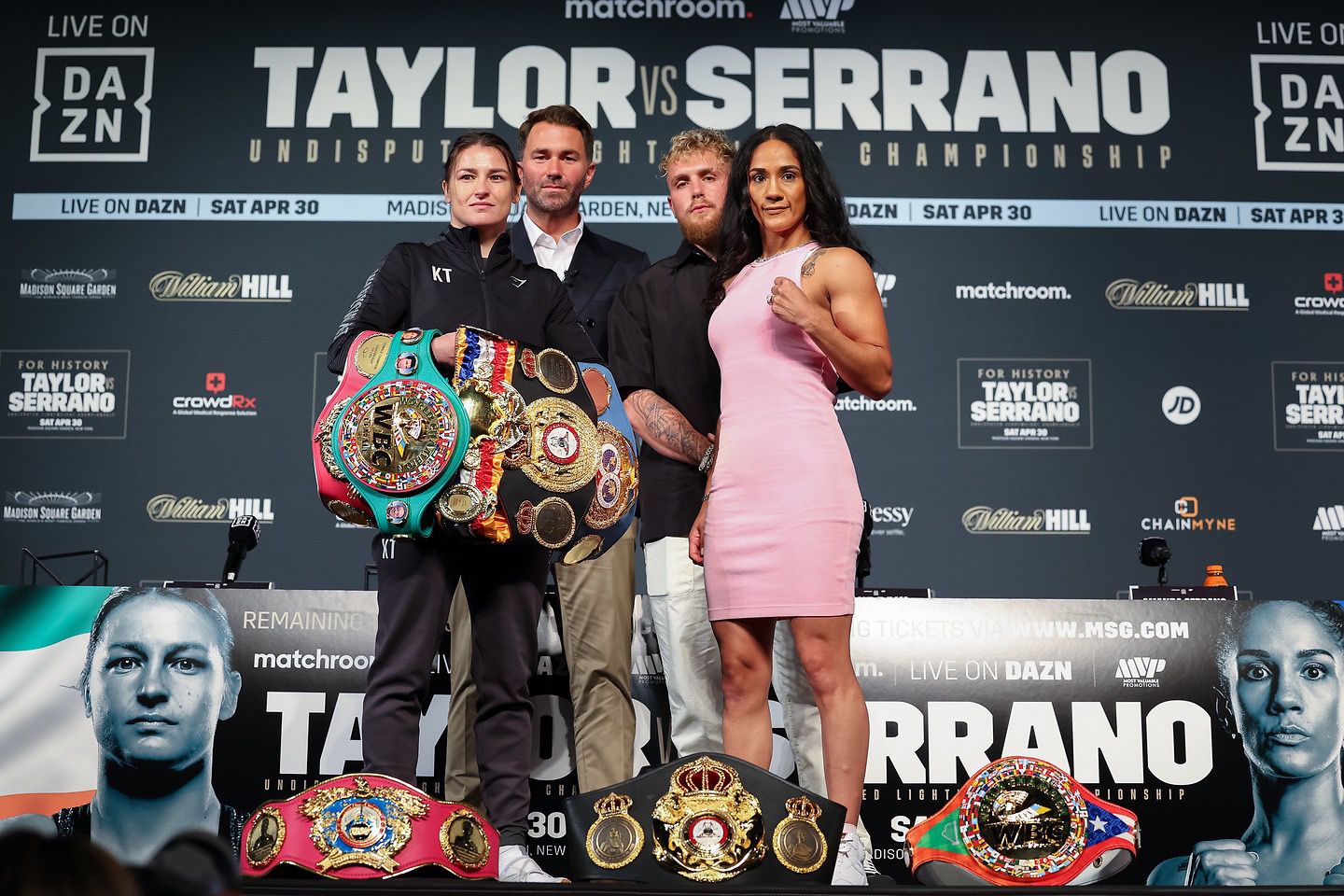 The amount of media we have had to do all week was huge. I’m sick of talking about myself but it’s been an amazing week so far. This is definitely very different than how I started boxing when I was eight or nine years old. Like Eddie said, I had to pretend I was a boy to get fights. Women’s boxing wasn’t even a sanctioned sport in Ireland. Now here we are many years later headlining MSG, the most iconic venue in boxing. Making history as the biggest women’s boxing match in history is just incredible. This is all of the sacrifice that I have been working for, for sure.

It’s been a long time and it’s finally happening. Now I’ll shine thanks to all of you guys at Madison Square Garden. I couldn’t ask for a better place to make history once again. Sitting here I made history. I won my golden gloves here at the Hulu Theater. And I made history on DAZN with you becoming a seven-division world champion and I plan to do the same thing at the big garden. It’s my first time there. I shine under pressure.

One of my goals is to become undisputed champion and she has that and I’m going up, once again, two divisions to fight one of the best fighters in the world.

It’s been an amazing long journey getting here to fight Katie Taylor. Timing is no better than right now. I am so looking forward to Saturday.

We are probably the two nicest fighters. There is no bad talk between me and Katie Taylor because the fights are won inside the ring, not outside. We don’t need to talk bad about each other.

Our accomplishments got us where we at right now and we are making history together. No matter what happens on Saturday night, this is for the fans, women in general, and women in boxing and women’s boxing is only going to grow more.

I want the bell to go so I can punch this guy down. I’m looking forward to that moment. I’m here to talk about boxing. This is my main career. This is my livelihood. I’ve been boxing since I was 8 years old. How can anyone question it?

I love what I do and I’m great at it. That’s why I continue to stay on the top, top 10 in the world. This Saturday night I will knockout Liam Smith as I said before.

I’m not here to shy away. I’ve said it before, and I’ll say it again. I’m here to fight. I’m gonna knock him out and I’m ready for it.

When Jessie pulled out last time, they said wrap yourself in cotton balls because you’re not dropping this fight. I’m happy Jessie’s fans need to needle it back a little bit, but I’m very excited for this.

Once the fight starts and it gels, it will gel into a very good fight. I fully believe I will take over.

When I win this fight, it’s already written, thanks to all the people around me. Elin is a great fighter. Leading up to this fight, Katie and Amanda, it’s the best of the best.

The difference between me and Elin – she’s a soccer player turned boxer. I’ve been boxing for over half of my life. I ain’t gonna lose to no half town boxer. And it’s all gonna go down on April 30.

It’s an honor to be here at MSG and I’m the first Swedish boxer to come here… Ive been ready for such a long time now.

Galal Yafai
Fighting at MSG in my second fight is a dream come true. I learned how small the gloves were and how it was walking into a small gym to fight. I’m here just to win and to look good.

It’s a great approach for where I’m at in my career right now. I’m super excited and I had a really good camp. I’m ready to show.

I’m very thankful for Chordale Booker because you don’t always find fighters who want to put their undefeated on the line.

Nothing comes close to the things that I have sacrificed for this sport and y’all are going to see that.

We’ve been waiting for a fight so that’s what we are moving to. I’m ready to fight anybody and make my dreams come true. And that’s what is going to happen on Saturday. It’s my time. I have put in my work.

I heard yesterday that this is my third fight in 57 or 59 days, so I am very active and want to show what I’ve got.

Katie and Amanda have been trailblazers for women’s boxing. They have paved the way for my generation, and I hope I can pave the way for the next generation.

I’ve got a lot of respect for my opponent. I think she’s a great fighter and she’s going to come to fight and come to win. I’m excited. I want to be in a real fight. That’s when you’re going to see the best me.