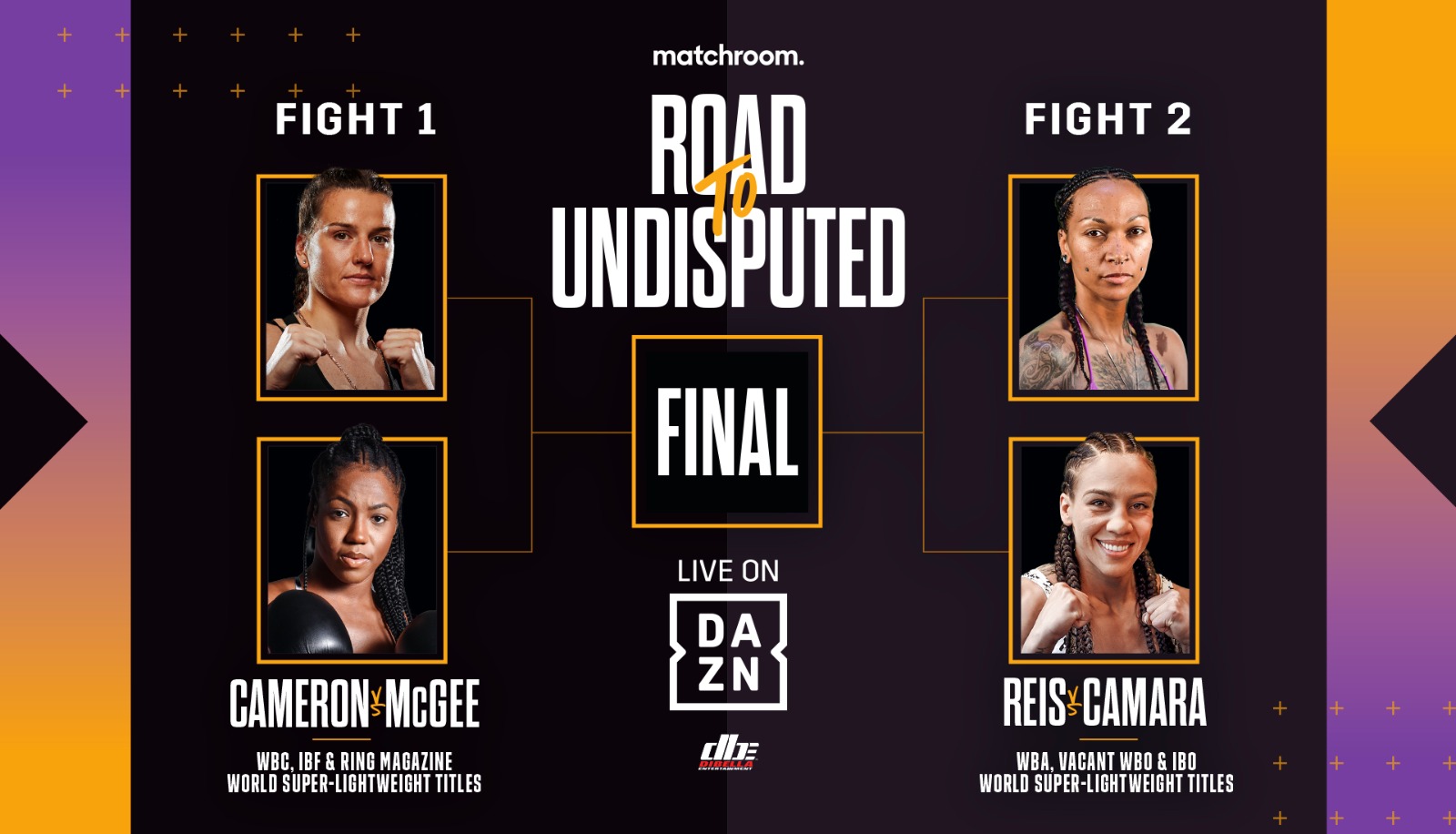 The road to 140lbs Undisputed Crown

The road to 140lbs Undisputed

Matchroom Boxing, in partnership with DiBella Entertainment, announce today that the Undisputed Super-Lightweight crown will be put on the line as Chantelle Cameron, Mary McGee, Kali Reis and Jessica Camara fight it out for 140lbs supremacy, live on DAZN.

Cameron (14-0, 8 KOs) displayed an impressive performance last time out in her maiden WBC World Title defence, beating former champion Melissa Hernández by TKO in the fifth round to retain the green and gold strap and continue her flawless record since turning professional in 2017.

Mary ‘Merciless’ McGree (27-3, 15 KOs) comes into the fight with increased momentum, notching seven straight wins since her World Title loss in 2013 and picking up the IBF Super-Lightweight Title on the way. The American’s last win came via a ninth round TKO against Deanha Hobbs to retain her crown.

“I’m delighted to have this opportunity to show that I’m the number one fighter in the world at 140lbs,” said Cameron. “All I’ve wanted since I started in boxing is to become Undisputed, and now I have a fantastic chance to achieve that.

“These tough fights against the other champions are what motivates me and pushes me in the gym, and you’re going to see the very best Chantelle Cameron.

“They are all great champions, and first things first I have Mary McGee to take care of, and then once I come through that I’ll be ready to make history against the winner of Kali Reiss and Jessica Camara.”
“This is an exciting time for women’s boxing,” said Camara. “I’m honoured to be a part of an event of this magnitude that will help to bring a lot of exposure to the ladies. Kali, Mary and Chantelle are all great fighters, and I know these fights will bring out the best in me. Thank you to Lou DiBella and Eddie Hearn for coming together to make this possible and for providing a platform for me to show the world what I am capable of.”

“If we can work together to find one champion for every division then it would be a massive moment for the sport and we have a great opportunity to do that in the 140lbs division,” said Eddie Hearn, Matchroom Sport Chairman. “Women’s boxing is red hot at the moment and huge credit to these 4 champions for putting it on the line in the road to Undisputed on DAZN. Lou and I have been heavily committed to women’s boxing for a number of years now and it’s great to see them finally getting the plaudits and the rewards they deserve.”

“Both DiBella Entertainment and Matchroom have been leaders in advancing women’s boxing and elevating the great female fighters in our sport,” said Lou DiBella, President of DiBella Entertainment. “I’m happy that Eddie and I were able to arrange these historic fights and I’m grateful to my friends at DAZN, who will be streaming it. Chantelle, Mary, Kali and Jessica are four elite 140-pound athletes, deserving of this incredible opportunity. After two terrific semi-finals, a queen will be crowned at Super-Lightweight.”

Dates and venues for Cameron vs. McGee and Reis vs. Camara will be announced in due course.