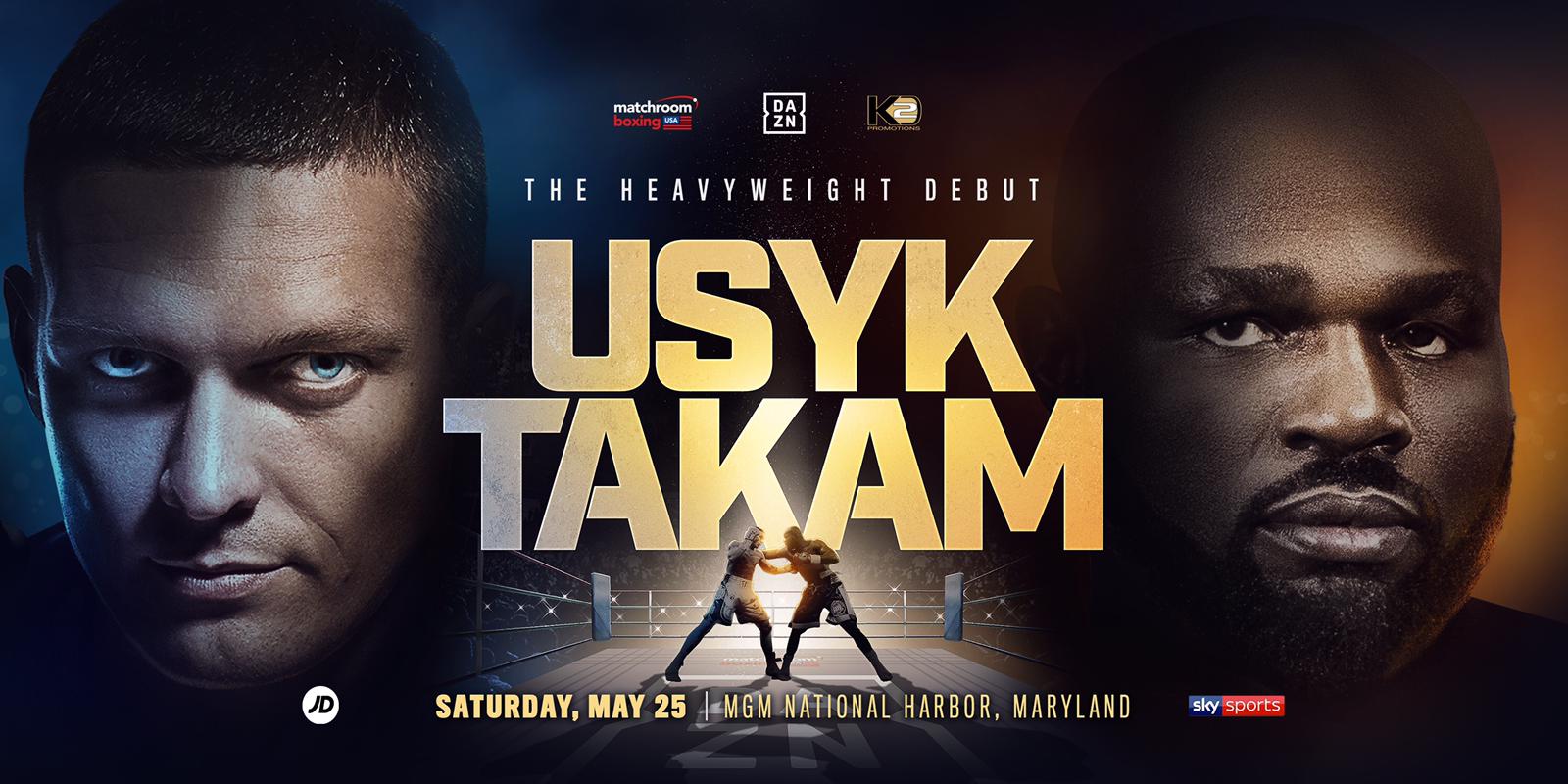 Ukrainian pound-for-pound star moves up on May 25

Pound-for-pound star Oleksandr Usyk will make his Heavyweight debut against Carlos Takam at the MGM National Harbor in Oxon Hill, Maryland on Saturday May 25, live on DAZN in the US and on Sky Sports in the UK.

Usyk (16-0 12KOs) was the dominant force in the Cruiserweight division over the last 18 months, culminating with his commanding win over Murat Gassiev in July to become the undisputed World ruler and the winner of the inaugural World Boxing Super Series tournament in Gassiev’s Moscow home.

The unbeaten ruler waved goodbye to the division in style in November in Manchester where he KO’d Tony Bellew in the eighth round of their clash – a seventh straight World title triumph on the road for the 2012 Olympic gold medal hero.

The 32 year old’s bid to win World titles at Heavyweight will begin with a stern test against French-Cameroonian Takam (36-5-1 28KOs). Takam challenged Anthony Joshua for the IBF, WBA and IBO World titles in Cardiff, Wales in October 2017, taking the Briton ten rounds, and recently starred in a fight of the year contender with Dereck Chisora at The O2 in London, England in July 2018 – returning to that venue in December to register the 36th win of his career and 28th inside the distance.

“May 25 marks a major moment in my career when I move to the Heavyweight division,” said Usyk. “At Cruiserweight I did it all and became the undisputed champion and that is my goal now in the Heavyweights.

“This is the ultimate challenge and it begins on May 25 against Carlos Takam. It’s a tough first fight but I need to test myself against World class opposition on my new road to undisputed.”

“Usyk has achieved everything in the Cruiserweight division – I am ready to welcome him to the new world of Heavyweight boxing,” said Takam. “I can promise that this will be a great fight and I will provide Usyk with a huge test on his Heavyweight debut. I have huge ambitions of my own in the division and this fight will provide me with the chance to prove that.”

“The time has come for the ultimate challenge for Oleksandr Usyk,” said promoter Eddie Hearn. “This pound-for-pound star had dominated the Cruiserweight division becoming undisputed champion after just 15 fights. Now he takes the daring leap to the land of the giants as he attempt to repeat his achievements in the Heavyweight division.

“Takam is the perfect test for the Heavyweight debut. A big strong, all action fighter who will welcome Usyk into the fold with a heavy arsenal – be ready for fireworks on May 25! I’m delighted to promote this outstanding fighter in America as DAZN start a magical period of Canelo vs. Jacobs, Usyk vs. Takam, Joshua vs. Miller and the return of GGG all in the space of two months – don’t miss it!”

“Usyk brings to Heavyweight his skills of the Olympic champion as well as his experience of the undisputed Cruiserweight champion,” said Alexander Krassyuk, general director of K2 Promotions. “He has got all he needs to pick up the heritage of the great brothers Vitali and Wladimir Klitschko, to unify the belts and to reign the division for many years. This journey starts on May 25 with Carlos Takam. Let us witness his story becoming the history.”

An announcement on the undercard will be made next week.

Tickets go on pre-sale on Wednesday and on general sale on Thursday – full ticket details will be released early next week.