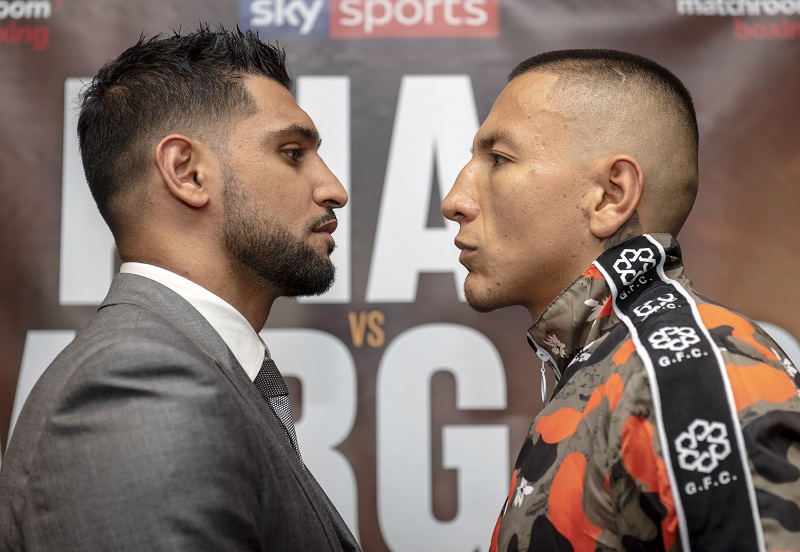 Vargas Warns Khan: “if I Touch Him On The Chin, He’s Going Down!”

Samuel Vargas says he has the power to knockout Amir Khan when the pair clash at Arena Birmingham on September 8, live on Sky Sports.

Vargas is ranked number 9 in the WBA and knows that a win over the former unified World Champion will rocket his name into World title contention in the Welterweight division.

The 29-year-old Canadian based Columbian doesn’t believe that Khan managed to shake off any ring rust in his first round destruction of Phil Lo Greco in April and has warned the UK favourite to prepare for a punishing battle.

“If I touch him on the chin, he’s going down,” said Vargas.

“That’s a guarantee. I’m sure it’s going to be a hostile territory, but I’ll impose my will on him. He’s an old man. He’s been hurt before and he’s been stopped many times.

“I just have to land one punch on his chin, left or right hand. His feet will go all over the place and if he’s still there I’ll hit him again and again. It’s there, everyone knows it’s there.

“If he’s expecting another 39 second blow out then he’s going to be in for a big shock. He’s been stopped really badly a couple of times, so we know it’s always there and we have 36 minutes to do it.

“Genetically, we’re not supposed to receive that much punishment and get back up. Your body can only take so much before it gives out. Maybe this is the fight for him. He’s older, he’s received a lot of punishment, he’s got a lot of mileage on him, so I just have to go out there and expose him.”

Vargas has fought both Errol Spence Jr and Danny Garcia, losing to both. He will be looking to make it third time lucky when he takes on another elite fighter in Khan next month, who he feels he is being overlooked by.

“I’ve been in there with the best, obviously I didn’t get the results that I wanted but those defeats have been my biggest lessons. I work hard and I sacrifice a lot. I’m just a regular guy that decided not to quit and not to give up, to get up and to keep on going and here I am. That’s why I was given this opportunity.

“All of the pressure is on him. I just need to let him know that he is the smaller man and let him know that I’m dictating the pace of the fight. This is all or nothing for me. It’s either win this fight or win this fight. I have no choice. For him it’s just like, ‘I need to get through this guy and then I get the big fight’. That’s how he sees it. For me this is everything.”

Khan’s clash with Vargas tops a packed card in the second city, as Jason Welborn defends his British Middleweight title in a rematch with Tommy Langford, whom he snatched the title from in May via split decision in Walsall.