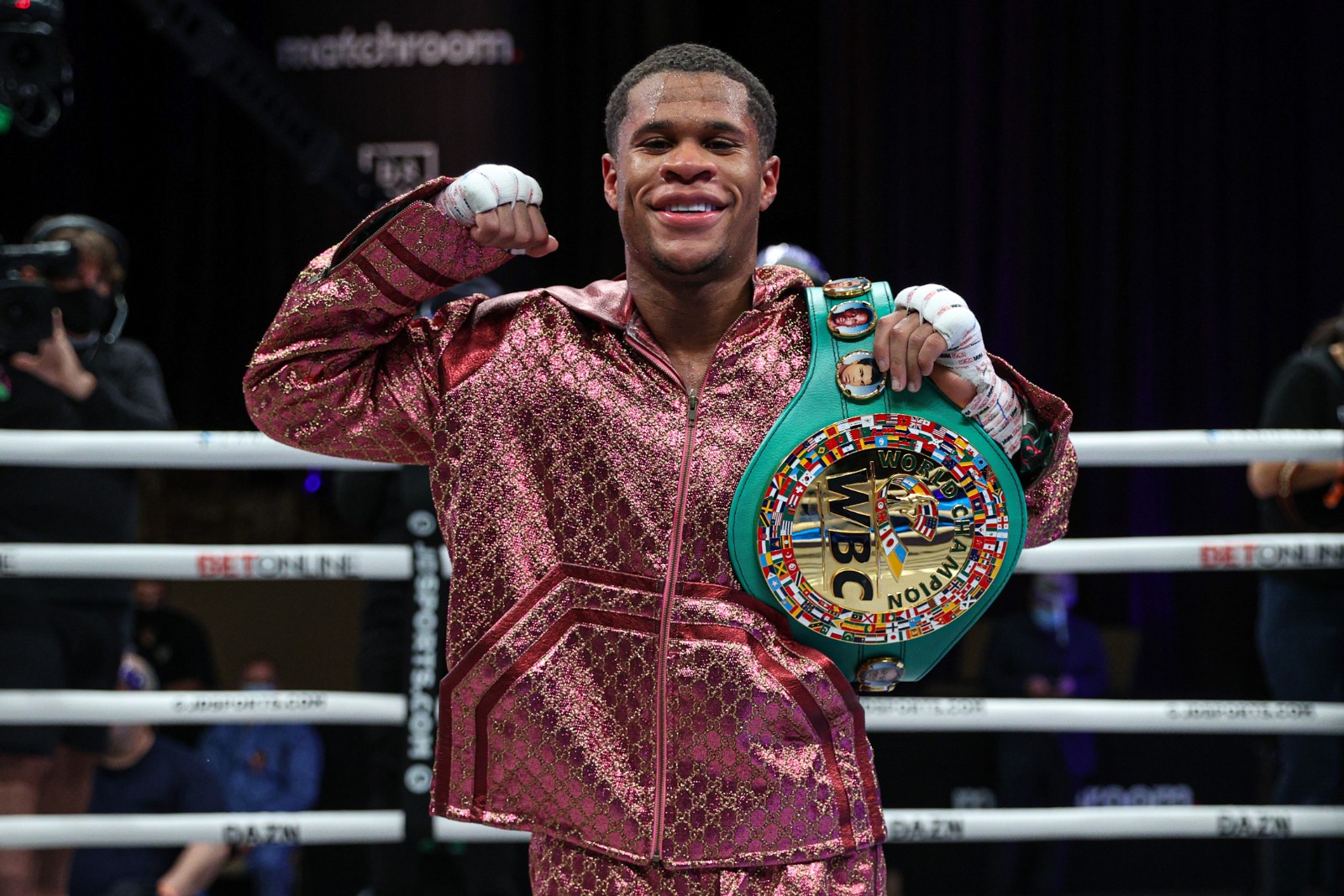 Haney (25-0 14 KOs) put his crown on the line for a second time, two days shy of one year out of the ring having injured his shoulder in his first defense against Alfredo Santiago in Los Angeles last November.

Haney soon got his spear-like jab upstairs and downstairs, Haney warmed into his first fight for a year in the opening six minutes and began to express his full arsenal in the third round, where Gamboa (30-4 18 KOs) also showed some frustration in hitting Haney after the break.

Gamboa began to shows signs of ambition in the middle rounds but WBC king Haney soon extinguished them, and the former unified Featherweight champion reverted back to trying to keep the Las Vegas starlet at bay, and his survival tactics met the wrath of the referee in the penultimate round where a point was taken from the challenger.

I am ready to put on a big 2021, fight the best and put on a statement to show the world that I am the best.

Haney showed no ill-effects of the shoulder injury or year lay-off as he came out firing on the final session, and while he was unable to put the cherry on top of a good night’s work by getting Gamboa out of there, the judges saw the action 118-109 and 120-107 twice as ‘The Dream’ got 12 vital rounds under his belt ahead of what proimises to be a stellar 2021 for the 135lb division.

“I’m pleased with the performance because I didn’t take any punishment,” said Haney. “I came out of there looking like I did when I went in, I was ready to fight again if I had to.

“I knew that he would go into survival mode and he was successful with that, he was in there trying to survive as much as he did. I pitched a shut-out and I didn’t get hit with any big shots, it is what it is.

“Of course I wanted the KO but every fight can’t end like that. Gamboa is a crafty opponent, he showed that he can survive, he showed why he has been in the game for a long time. Anyone that has knocked him out has taken punishment while doing it, I didn’t take any punishment and maybe that’s why I didn’t get the KO.

“I beat him the smartest. The jab, the reach, the speed and the ring IQ were the keys to victory. I showed that I am able to go 12 rounds, to hit and not get hit, you can talk about landing big shots but Gamboa didn’t land anything.

“There’s always going to be pressure, every fight is going to have everyone watching and critiquing what you do, I understand that. I am ready to put on a big 2021 and fight best and put on a statement to show the world that I am the best.

“I am interested in my mandatory of course but I want all the belts, Teofimo Lopez has the rest of the belts so I want to make the undisputed fight.”

A pair of Heavyweights put up their claims for major fights in 2021 with big KO statement wins.

Filip Hrgovic (12-0 10 KOs) took his time in the opening session against Rydell Booker (26-4 13 KOs) but towards the end of the second, the Croatian opened up and sent Booker down to the deck. The Detroit banger made his way through the third but ‘El Animal’ began to break through at will and with Booker having been told by the referee to ‘show him something’ in the fourth Hrgovic just continued his assault and the referee ended matters in the fifth – with Hrgovic quick to call for a big fight next.

Zhilei Zhang (22-0 17 KOs) lived up to his ‘Big Bang’ nickname, exploding a one-two on the chin of Devin Vargas (22-7 9 KOs) to end their clash in the fourth round. The giant Chinese star was meticulous in breaking his man down, and the two-time Olympian chose the perfect time to step on the gas and delivered his warning shot to the rest of the division in devastating style.

It was a great night for three of Matchroom’s young prospects.

Reshat Mati (8-0 6 KOs) sent Marcos Mojica (17-6-2 13 KOs) to the canvas inside the opening minute as a big right hand stiffened the legs of Mojica and a clipping left sent him down. Mojica survived the round, but Mati started to land the uppercut and delivered one with his left hand to end proceedings in the second.

Raymond Ford (7-0 3 KOs) demanded a dazzling performance from himself in the build-up to Saturday night’s action and the New Jersey starlet certainly delivered with a third round stoppage in Florida over Rafael Reyes (18-11 7 KOs). Ford had Reyes down in the opening session with a nice left hand and there was more spiteful stuff in the third round as a spearing left nearly put the Mexican through the ropes, and a barrage of punches followed to end the action and record the third stoppage of his pro career.

Arthur Biyarslanov (7-0 6 KOs) had the shortest night of his blossoming pro career, dispatching Juan Jose Martinez (28-10 20 KOs) inside a minute of the fight, with The Wolf landing a right hand to the temple that Martinez just couldn’t recover from.