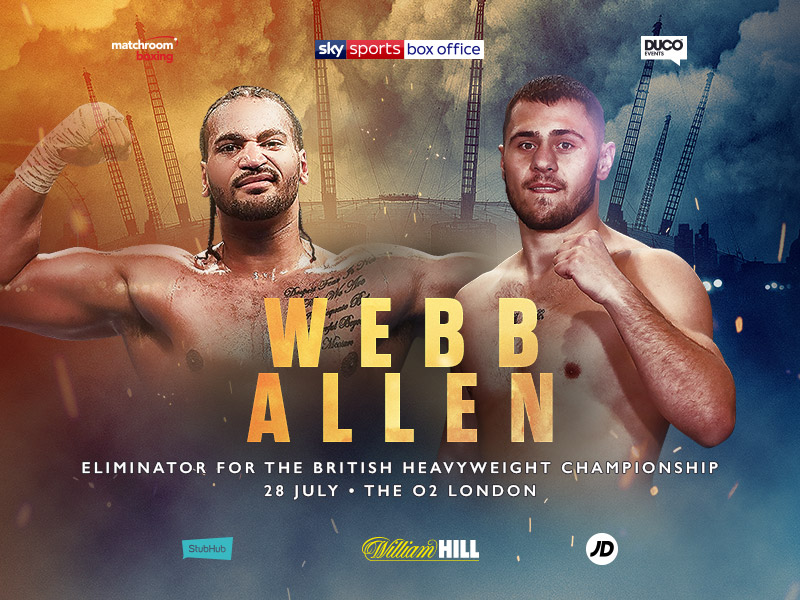 Webb And Allen Clash At The O2

Undefeated Heavyweight Nick Webb will take on Dave Allen in an Eliminator for the British Heavyweight Championship at The O2 in London this Saturday (July 28), live on Sky Sports Box Office.

Webb was last in action in February and the hard-hitting Surrey man, with ten stoppages from 12 wins, is raring to get back under the lights and begin his raid on the stacked domestic Heavyweight scene by taking out Doncaster’s Allen.

“As soon as I saw Dave calling me out on Twitter I told my manager to get the fight made,” said Webb. “It has been made at short notice but I’m always in the gym and I’m always ready to fight. I’ve been out of the ring for a while now and I’m promising a big performance on Saturday.

“Dave is a fighting man and always takes it to his opponents so I’m expecting a war on Saturday. He’s as tough as they come but if I connect cleanly with anyone, it’s lights out for them. A win on such a huge platform against a popular fighter like Allen will really catapult my name to the top of the Heavyweight mix.

“Everyone knows Dave and everyone loves him, I like him too, but this is business and on Saturday I’ll show him what I’m all about. We are competitors and I’m there to take him out.”

Allen travelled to Paris to take on Olympic gold medallist Tony Yoka in his most recent fight in June, ultimately coming up short after being stopped in the 10th and final round. The fan favourite has proved that he will take on anyone anywhere and is looking to halt Webb’s promising career in its tracks.

“I saw Eddie offered Joe Joyce to fight Nick Webb, then my name was mentioned in an interview if that was off so I sent Eddie a message straight away,” said Allen. “Who wouldn’t want to be part of another big PPV show? I’ve been involved in a few now and I couldn’t say no when I knew there was an option to fight on this card.

“He’s a big strong man who can punch with a good amateur pedigree. He seems a nice guy, this is nothing personal it’s just another big fight. He’ll be looking at this to kickstart his career on to the big scene. It’s an evenly matched fight but one I know I can win.

“Webb’s always in training, I follow him on social media so we’re on a level playing field with the short notice. If it comes down to who wants it more, there’s only one winner and that’s me. It’ll come down to a battle of strength, toughness and who takes the better shot and I think that’s me. I’ve got the experience going in to these big nights and that’ll make up for some of the attributes I may be lacking in.

“Win, lose or draw this is going to be my last fight for a while. People might say that’s not the best thing to say before a big fight, but it’ll help drive that extra 10% out of me. I’ve been in some good, hard fights in recent years and I think it’s time to rest up and revitalise myself.”

Webb vs. Allen replaces Eggington vs. Cook after the Englishman suffered an injury in sparring.

Webb vs. Allen lands on the undercard of the highly-anticipated Heavyweight clash between Dillian Whyte and former WBO ruler Joseph Parker – with the WBC Silver and vacant WBO International belts on the line, former Heavyweight World title challengers Dereck Chisora and Carlos Takam clash for the WBA International Heavyweight belt in a must-win match up, Joshua Buatsi goes for his first pro title when he fights for the WBC International Light-Heavyweight crown, Katie Taylor defends her WBA and IBF World Lightweight titles against Kimberly Connor, Conor Benn and Cedric Peynaud rematch after their fight of the year brawl in 2017 and unbeaten Super-Welterweights Anthony Fowler and Craig O’Brien meet over eight rounds

Face value tickets for July 28 are available from StubHub the official ticket partner and marketplace of Matchroom Boxing and Anthony Joshua.