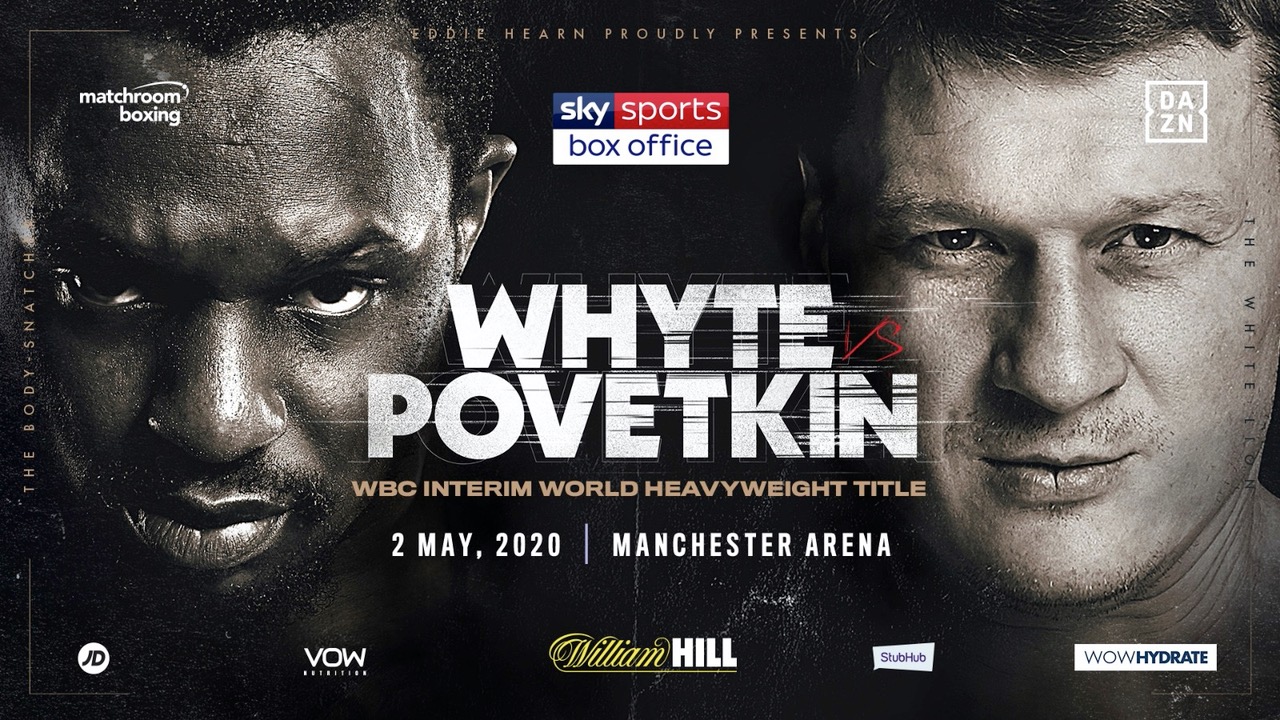 Whyte And Povetkin Collide In Manchester

Dillian Whyte will make the first defence of his WBC Interim Heavyweight World Title against Alexander Povetkin at Manchester Arena on Saturday May 2, live on Sky Sports Box Office.

Brixton’s Whyte (27-1, 18 KOs) landed the WBC Title with a unanimous decision win over Oscar Rivas in an exciting battle at The O2 in London back in July 2019 before travelling to Saudi Arabia in December where he outpointed former World Title challenger Mariusz Wach on the Ruiz vs. Joshua 2 undercard.

Russian dangerman Povetkin (35-2-1, 24 KOs), an Olympic gold medallist and former WBA World Champion, proved that he still has what it takes to be a force in the Heavyweight division in 2019 with a win over Hughie Fury in August and a split decision draw with rising Heavyweight contender Michael Hunter in an all-out war in Diriyah.

“This is a great fight, Povetkin is an Olympic gold medallist, has loads of experience, he’s a former World Champion and he’s only lost to Joshua and Klitschko,” said Whyte. “He is still very dangerous, he gave AJ a lot of problems and then beat Hughie Fury. I am not overlooking him at all, he will come in shape, he’s tough and very well-schooled.

“You only have to look at his resume to see that he’s always been considered as one of the most fearsome punchers in the Heavyweight division with big KO wins over Huck, Charr, Takam, Wach and Price. He showed in Saudi Arabia that he still has a lot left in the tank and he is still very dangerous. I’ve got respect for him but I’m on to maximum violence, straight animal instinct.

“I want to be Heavyweight Champion of the World so anywhere in the world is my lion’s den. If you aspire to be World Champion, you should be able to fight anywhere. Manchester is a great city with great fight fans and I’m looking forward to going back there.”

“I am pleased to fight Whyte, it has long been discussed but didn’t happen for whatever reason,” said Povetkin. “Dillian is a good strong boxer and it will make for an interesting fight. I am not about big announcements, I am about winning in the ring, and on May 2nd people will see a spectacular fight.”

“This is a Heavyweight thriller and so important to the landscape of the division,” said Eddie Hearn. “Dillian Whyte sits as Mandatory Challenger to Tyson Fury and while the wait is frustrating, Dillian continues to take high risk fights and that’s why he is such a fans’ favourite.

“The last time Dillian fought at this arena, we witnessed all time classic against Derek Chisora, We are planning a huge night in Manchester as Dillian Whyte continues to march towards a shot at the Heavyweight World Title.”

“I think all boxing fans can agree that we are up for a great fight,” said Head of World of Boxing Promotions Andrey Ryabinskiy. “Both stylistically and in terms of what’s at stake in this fight makes it a spectacular and anticipated event.

“Of course, we believe in Alexander but have to understand that Dillian Whyte is a tough opponent who’s strong and ambitious, besides he has come a long way to be in a championship fight. Many would wait out for an easier opportunity, but he decided that he needs this fight and it commands respect.”

“Whyte is within touching distance of a World Title, but still keeps taking risks against dangerous rivals, and we’ve already seen the threat of Povetkin, who overpowered David Price and posed early problems to Anthony Joshua.

“Dillian can prove himself again as one of the world’s best and there could be a very special announcement in the coming days. May 2 in Manchester should be a magnificent night of boxing.”

Tickets go on sale to Fight Pass members from 10.00am on Thursday March 5 via StubHb (www.stubhub.co.uk) and Matchroom Boxing (www.matchroomboxing.com).

General Sale tickets are available to purchase from 10.00am on Friday March 6 via Manchester Arena (www.manchester-arena.com), StubHub (https://www.stubhub.co.uk) and Matchroom Boxing (www.matchroomboxing.com).