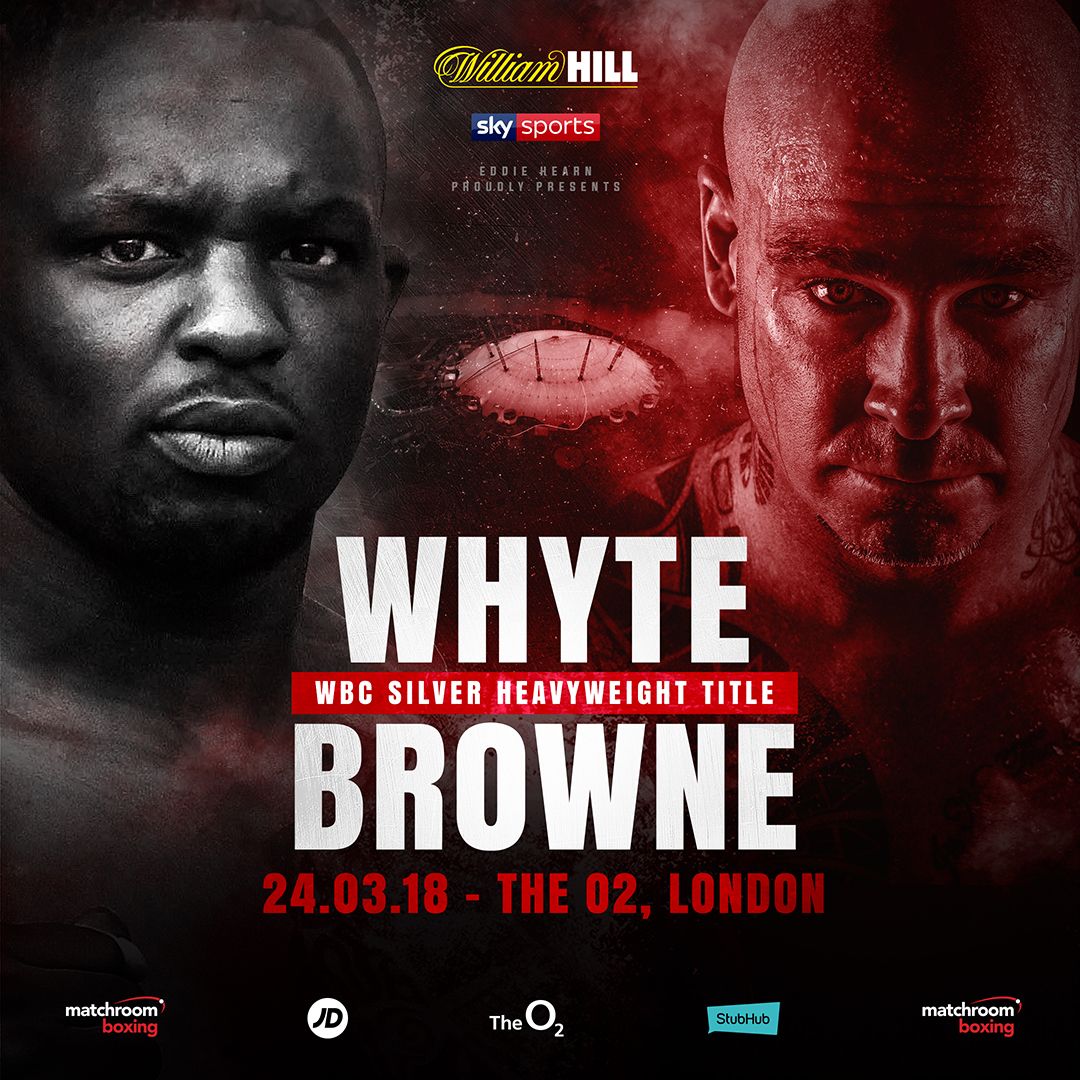 Whyte And Browne Clash At The O2

Dillian Whyte will defend his WBC Silver Heavyweight title against Lucas Browne in a crunch clash at The O2 in London on March 24, live on Sky Sports.

Whyte is hunting World honours after he landed the title in his last outing in Cardiff in December against Robert Helenius and the 29 year old puts his number one ranking in the WBC on the line against the Browne.

‘The Body Snatcher’ is gunning for WBC king Deontay Wilder with the ultimate goal to land the title and set up a huge unification rematch with old foe Anthony Joshua, and Whyte knows he must put an end to his bitter online feud with Browne in style in Greenwich.

“I can’t wait, I hate Lucas Browne and I want to hurt him,” said Whyte. “He’s said some nasty things and he’s going to have to pay for them.

“I don’t think he really wanted this fight. A deal was in place before then he started to try and change the terms. He kept delaying things after we gave in to his demands and started saying there was a fight in America he was chasing. We’ve bent over backwards and up till now he’s been more interested in making excuses than taking the fight. It’s been frustrating but we’ve finally got over the hill now so let’s go.

“He’s a big guy with an unbeaten record so you have to rate him a bit. He carries some power. You have to respect Heavyweight power, it only takes one punch.

“I’m not overlooking Browne, I’m focused on going to town on him. If I don’t knock him out, I will not be happy. The plan is to beat Browne and move closer to a World Title shot. Beating him should make me a mandatory challenger for a World Title – I’m highly ranked across the board, I’ll be a more than credible World Title challenger. I’ve been building my way up so we’re set for a big year.”

Browne is a dangerous customer for Whyte to put his World title dreams on the line against, with the unbeaten Australian already tasting victory on the road at the very highest level when he KO’d Ruslan Chagaev in March 2016, climbing off the canvas in Russia to land the WBA title.

‘Big Daddy’ is no stranger to fighting in England as will be looking to claim a fifth KO win in his sixth outing on English soil, and launch himself into World title contention.

“I’m genuinely looking forward to coming over to the UK again and bashing Dillian,” said Browne. “If Helenius and Dereck Chisora hurt him, wait until he feels how I hit. I don’t like anything about him. He’s a loud mouth and I want to take his head off.

“I have absolutely no fears about coming to London and facing Dillian. After you go to Chechnya to fight, nothing else compares. I’ve fought in England five times already and love fighting there. I know if I stop Whyte impressively I’ll be getting another World title shot.”

Browne’s manager Matt Clarke added: “Lucas has an incredible fan base in the UK and Ireland. You’ll never see him turn down an autograph or a photo with fight fans and consequently he gets a lot of support.

“His social media is full of messages begging him to knock Whyte out and that’s exactly what he plans on doing. Knock out Whyte and then challenge for the World title, that’s our plan.”

“This is going to be an electric fight that I’m very happy to finally get over the line,” said Eddie Hearn. “There is no love lost between them and it’s a fight that is very important in the World Heavyweight landscape.

“These two can’t stand each other and I think that’s when you get the best out of Dillian – this is the high profile fight that he has been craving now for some time. He is the number one challenger with the WBC and ranked highly with every other governing body – win this and it’s a World title shot next for Dillian.”

Tickets will go on sale next week, a full announcement will be made shortly.