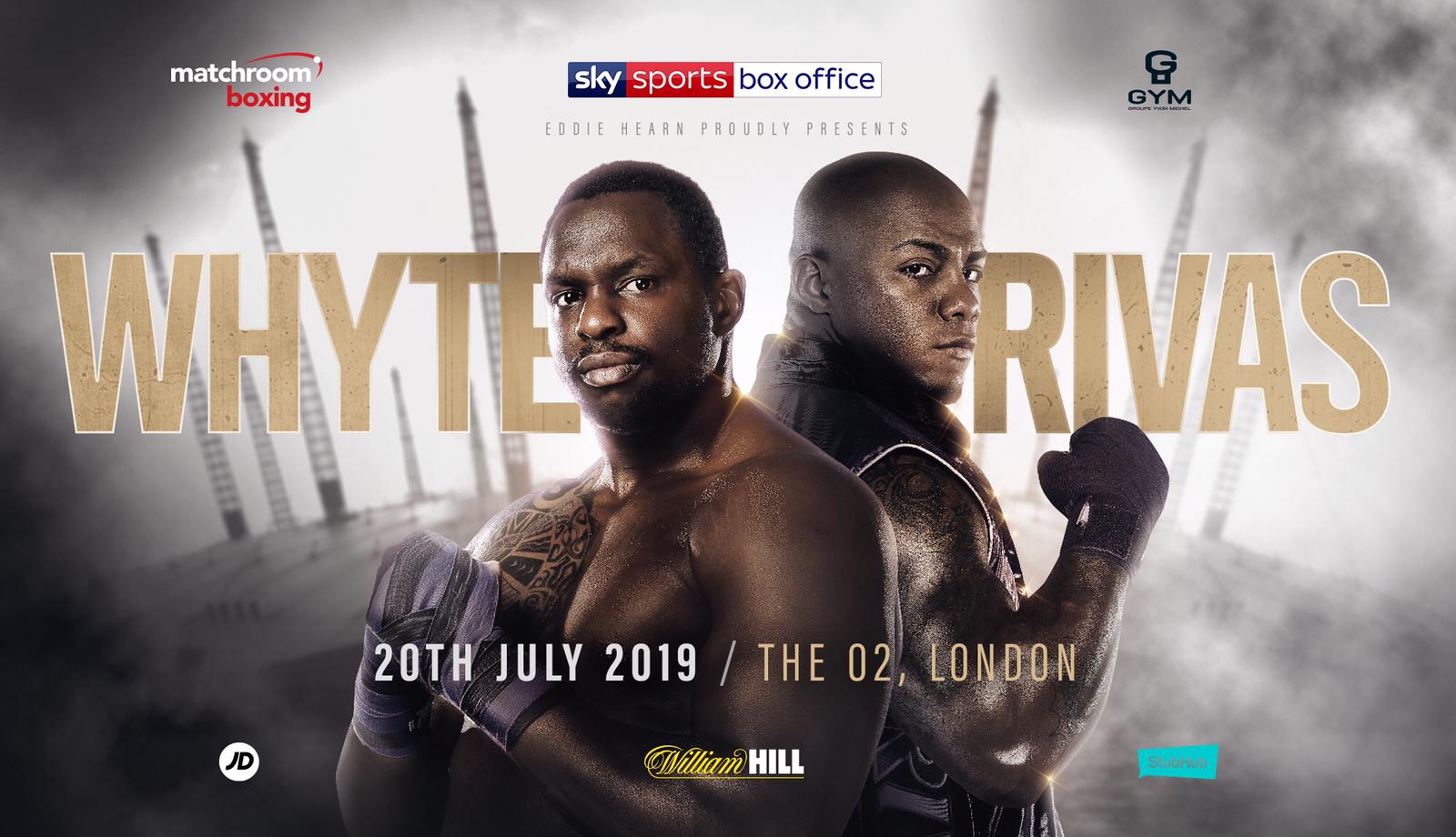 Dillian Whyte will face Oscar Rivas for the number one Heavyweight spot in the WBC at The O2 in London on Saturday July 20, live on Sky Sports Box Office.

Whyte (25-1 18KOs) holds the number one slot with the WBC and puts that on the line as the hard-hitting ‘Body Snatcher’ continues to blast his path to a World title shot. The Brixton banger put Derek Chisora away in devastating style in his last outing, the pair thrilling the Greenwich crowd in their rematch in December – before icing Del Boy in the 11th round.

The 31-year-old Briton will be gunning for a tenth straight win against Rivas, with wins over Joseph Parker, Robert Helenius and Lucas Browne sandwiched between his two wins over Chisora. Whyte has become a must-watch fighter since rocking old foe Anthony Joshua in their battle at The O2 in December 2012, and yet again takes on a high-risk challenge as he cements his spot as the leading Heavyweight contender in the world.

Rivas (26-0 18KOs) is yet another dangerous customer for Whyte to risk his number one rankings with, and the Colombian comes into the bout on the back of his biggest win in the paid ranks. Rivas travelled to Turning Stone Resort Casino in Verona, NY in January and KO’d former World title challenger Bryant Jennings in the final round of their clash, underlining his dangerous potential to World titlists and fellow contenders, with ‘Kaboom’ ranked at number ten with the WBC, seven in the IBF and a lofty five with both the WBA and WBO.

The Canadian-based 31 year old carried an impressive amateur record into the paid ranks, beating Kubrat Pulev in the 2008 Olympic Games a year after landing silver in the Pan-American games – and with 18 KOs in 26 fights since turning over, July 20 promises to be an explosive war between two in-form big-punchers, with huge stakes on the line.

“I am very happy to be fighting again at The O2 in July,” said Whyte. “Oscar Rivas is undefeated and ranked in the top 10 across the board of all the governing bodies. He has been one of the most avoided heavyweight fighters in the last few years.

“His KO victory over Bryant Jennings sent shockwaves through the division and Tyson Fury just turned down ESPN/Top Rank’s offer to fight him. I am over the moon that he has accepted the fight. He has a great amateur and professional record, including a win over Kubrat Pulev.

“I am more than happy to carry on fighting top 10 fighters like Rivas until I get my well-earned shot at Deontay Wilder or Anthony Joshua.

“I can’t wait until July 20 to fight again at The O2 which is one of the best venues in the world for boxing.”
‘‘I have waited for this opportunity for a very long time,” said Rivas. “Dillian Whyte is an excellent boxer, a World class fighter and the number one contender. He deserve all my respect for his accomplishments and I am grateful for the opportunity he is giving me.

“This is exactly the kind of challenge I was hoping to get. I am undefeated, I am planning to keep my perfect record after July 20 in my quest to get the ultimate opportunity to become World champion.”

“This is a great fight with both men coming off explosive late knockouts,” said promoter Eddie Hearn. “Rivas is undefeated and looking to take Dillian’s number one spot but as we know, The O2 has become a fortress for him of late and this is set to be another war. We are planning a huge night of boxing on July 20 with a monster card topped by the brilliant heavyweight headliner.”

“First I would like to thank Eddie Hearn and Matchroom Boxing who made a proposal impossible to turn down,” said Yvon Michel, President of Groupe Yvon Michel. “Oscar Rivas was willing to step up and face Anthony Joshua for June in New York and representations were made.

“It might not be his turn now but instead he is extremely happy, to be earning an eventual World title opportunity, by proving he is the best amongst the contenders against the outstanding Dillian Whyte. On July 20 a new star will be born!”

Adam Smith, Head of Sky Sports Boxing, said: “Dillian Whyte is risking it all again as he battles the dangerous Oscar Rivas at The O2, which has become a happy hunting ground for ‘The Body Snatcher.’

“Dillian has already delivered exciting wins over Joseph Parker and Derek Chisora at the same venue, but he could have his hands full against Rivas, the unbeaten Colombian with his own world ambitions.

“Expect another enthralling showdown when Whyte returns in the summer, and we expect to have a stacked card before a sizzling main event.”

General Sale tickets are available to purchase at midday on Thursday April 25 from StubHub (www.stubhub.co.uk), The O2 (www.theo2.co.uk) and Matchroom Boxing (www.matchroomboxing.com)