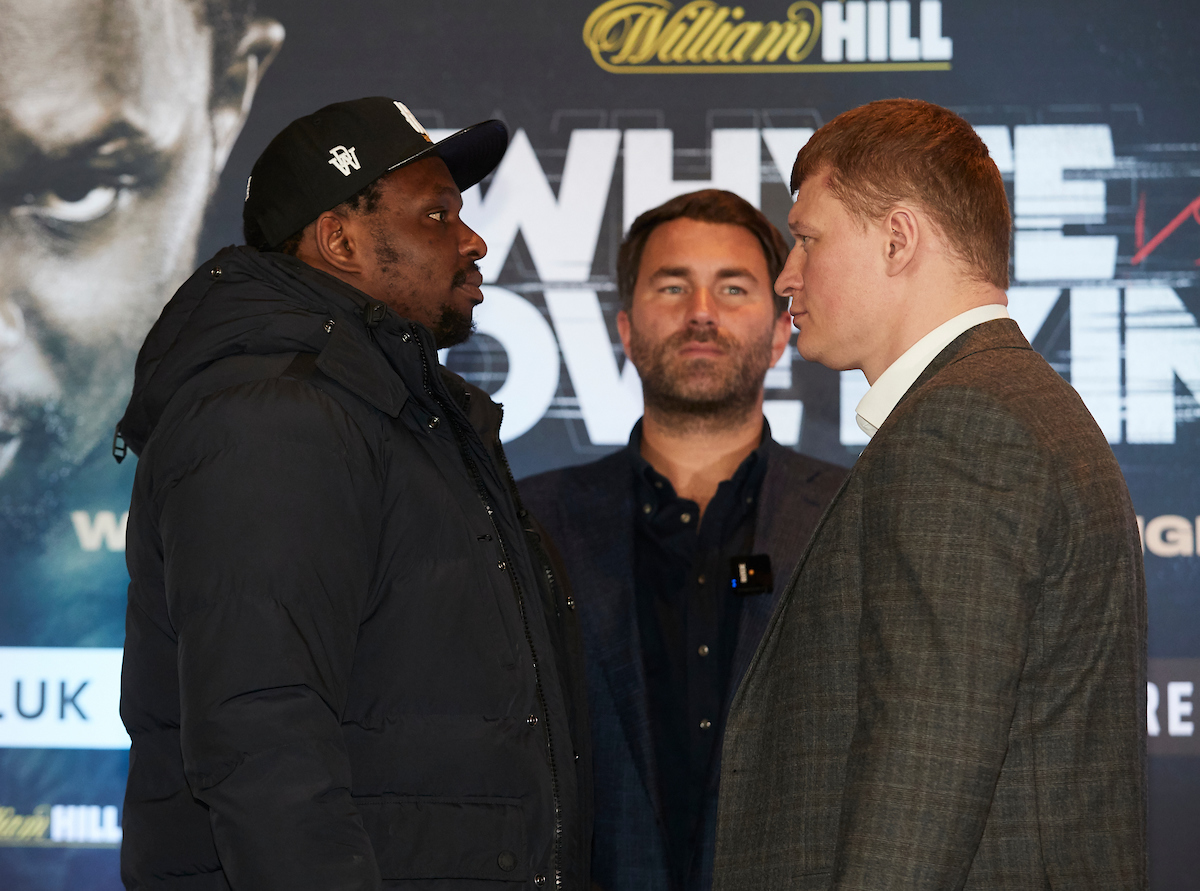 “What a fight! Dillian Whyte against Alexander Povetkin for the WBC Interim World Heavyweight Championship live and exclusive on Sky Sports Box Office. The response to this fight in the last 24 hours has been incredible and we’ll talk more about the fight and of course the importance of the Heavyweight division right now which will always be the flag bearer for the professional code. Three months ago, all of the belts with the PBC in America, now of course all of those belts in Britain with Tyson Fury and Anthony Joshua.

“This man to my right, Dillian Whyte, the official Mandatory Challenger for Tyson Fury, but will he wait, will he take the easy fights? Absolutely not. When I first sat down with him at the beginning of the year I said to him ‘what do you want from this year other than World Titles?’ and he said ‘I would like maximum violence’. It scared me a lot, I won’t lie. I thought about what kind of card and what kind of fight could deliver that and when I mentioned Alexander Povetkin Dillian Whyte licked his lips.

“The last time we came to Manchester, you remember what Dillian Whyte gave you. He gave you a fight with Derek Chisora that we will never ever forget. We have a monstrous card coming in, including one fight that I want to tell you about but I’m waiting for the contract to hit my email. We will announce the full card prior to general sale which is this Friday.”

“Thanks Eddie I can’t wait for that other fight as well – mouthwatering. This is about the Heavyweights and the Heavyweights come back to Manchester. What a fight that was between Dillian and Derek on the Anthony Joshua card a few years back. We’ve had Mike Tyson come here of course, David Haye, it’s a Heavyweight city for boxing. Let’s see it absolutely rammed on May 2nd. What a time for Heavyweight boxing, Anthony Joshua returning after reclaiming his titles out in Saudi Arabia.

“I was the fortunate enough to be in Vegas a couple of weeks ago for the brilliant performance from Tyson Fury to be Deontay Wilder for the first time. All of the belts are in British hands, all the titles. But let’s not forget Dillian, he’s waited very patiently. He’s been Mandatory for a long time, he often feels like he’s left out. He came into our offices in January and said this is my year, this is my time, I want the biggest and best fights.

“This guy sitting next to us Alexander Povetkin we know about his utter pedigree and his quality throughout. From Olympic gold medallist, to reigning World Champion. Only those two defeats to Wladimir Klitschko and Anthony Joshua. We saw what he did to David Price, he’s so aggressive, he’s so exciting, the styles are going to gel fantastically well between Dillian and Alexander on May 2nd, it’s a really important fight night particularly for Dillian as he moves forward. He’s going to get that opportunity, and I’ll go everything that I can personally to help him with that. He’s going to get his chance soon. He’s got business to take card of first on May 2nd.”

“I remember watching him fight Cedric Boswell when I had about three, or one fight. I remember him smashing Cedric Boswell to bits and Hasim Rahman – this guy is serious and now it’s my time to bring some maximum violence to him. Funny world of boxing, eh.

“He’s been through the mill, seen every style. I haven’t, I’m still learning. I’m learning on the job, in the deep end swimming. For me to fight these kind of guys is a massive learning opportunity for me. I believe I beat them all anyway. I just got to be in shape. Leave the cakes alone, I’m good.

“I’m not thinking about Tyson Fury, what’s happening with him, I’m just thinking about Alexander Povetkin, because he’s dangerous and he’s going to want to come and fight and leave it all on the line.

“That’s just in his DNA. We’re very similar in that mindset in that we come and give it our all, so I’m just focused on him. We’ll see what happens on May 2. We’ll have a chat about Tyson Fury and that. Now I’ll put that on the back-burner and just focus on Alexander Povetkin for the next eight weeks.”

“Povetkin is very dangerous. He’s had a very highly-decorated amateur and pro career. This fight for Dillian is very very important. It’s one that’s going to get his juices flowing. I feel like it’s going to be the birth of the all-rounder box fighter, the birth of a completed fighter. We don’t underestimate anyone. It’s going to be a proper humdinger. There’s three ways to beating this guy, whether it’s going forward or going back, or standing there and planting our feet and letting them go. It was a tough year but Dillian is back and I’m confident this is his time.”

“I am very happy to be back in the UK because people are very good and very knowledgable with regards to boxing and I am looking forward to my fight with Dillian, Dillian is a very strong opponent.

“Hi everyone, we are happy to be here again. Thank you to Eddie, to Matchroom Boxing, all of their staff, it’s a big pleasure to be working with you. Sasha fought in the biggest arena in the UK so it’s part of his history. There is nobody from the Russian fighters who fought in front of 80,000 people. It was historical for him.

“I want to say thank you to Dillian Whyte for taking this fight and for not waiting around for his World Title shot with easy fights. It will be a difficult fight for him because Sasha will be highly motivated. It will be a tremendous fight on May 2nd.”

Tickets go on sale to Fight Pass members from 10.00am on Thursday March 5 via StubHb (www.stubhub.co.uk) and Matchroom Boxing (www.matchroomboxing.com).

General Sale tickets are available to purchase from 10.00am on Friday March 6 via Manchester Arena (www.manchester-arena.com), StubHub (www.stubhub.co.uk) and Matchroom Boxing (www.matchroomboxing.com).