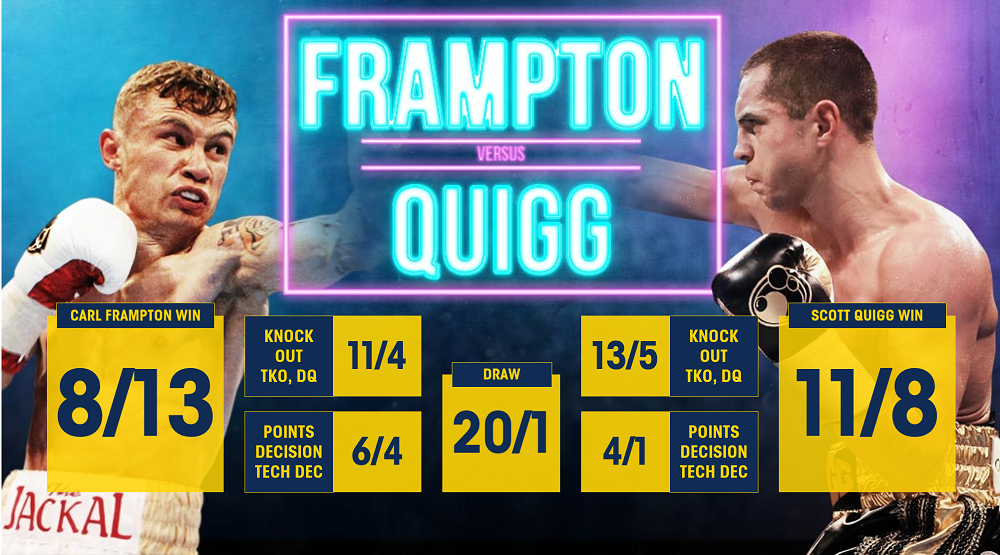 William Hill, the title sponsors of Frampton vs. Quigg, have made the Northern Irishman their 8/13 favourite to win the highly anticipated grudge match against Scott Quigg on Saturday night, while the Bury brawler is an 11/8 chance to add the IBF belt to his WBA version.

The build to the fight has got the whole boxing world excited with over 100 million people expected to watch the fight across the world – and over £5 Million+ expected to bet on the Manchester extravaganza.

Frampton makes the third defence of the title he landed on a huge night in his hometown against Kiko Martinez in September 2014. The 29 year old made his first defence at his Odyssey Arena fortress in Belfast, stopping Chris Avalos in February 2015 before travelling to Texas to defeat Alejandro Gonzalez Jr in July – taking his record to 21-0 with 14 KO wins.

Quigg defends his title for the seventh time, having blasted Martinez away in two rounds in his last outing at the Manchester Arena, where he’s defended the title on four occasions. The 27 year old’s win over the Spaniard was his 23rd KO win from 31 victories.

The betting public are slightly siding with Frampton to win the unify the IBF and WBA title – with 50% of total bets on fight being placed on ‘The Jackal’, 42% on Quigg and 8% on the draw. In Northern Ireland, William Hill have only taken three bets on Quigg – with thousands of bets on their national hero Frampton.

“Everyone has being talking about the smallest of percentages making the difference in the fight and that’s the same with the betting market on the fight,” said William Hill spokesman Tony Kenny, “Frampton is the punters favourite at the moment but we’re expecting to see a lot of interest in Quigg in the hours leading up to this mega fight.”