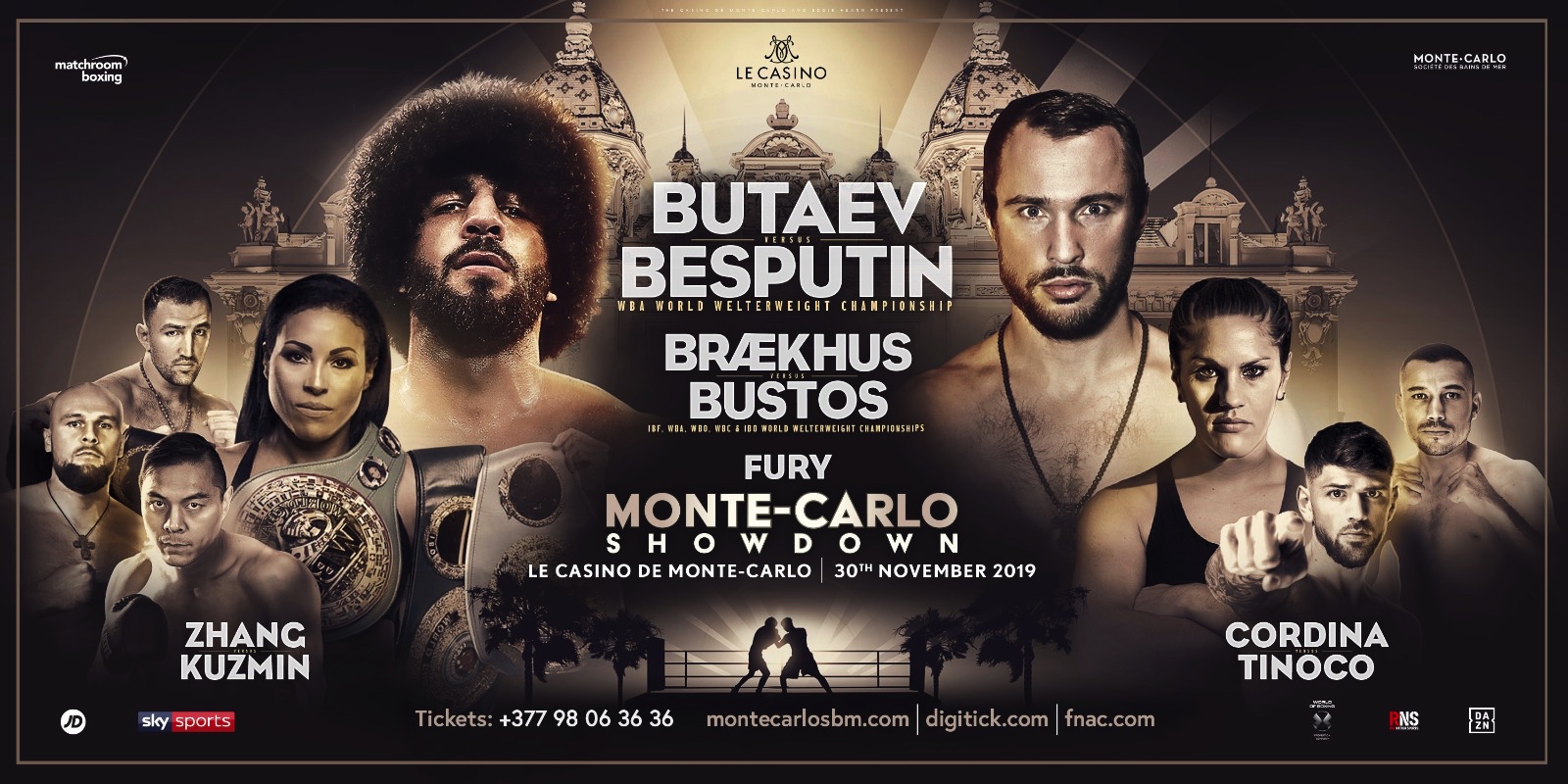 Eddie Hearn’s Matchroom Boxing and the Casino de Monte-Carlo are delighted to confirm further details of The Monte-Carlo Showdown – an unmissable evening of World Championship boxing taking place in the stunning and unique Monaco setting on Saturday November 30, shown live on Sky Sports in the UK and DAZN in the US.

At the top of the card, undefeated Russian contenders Alexander Besputin (13-0, 9 KOs) and Radzhab Butaev (12-0, 9 KOs) collide for the vacant WBA Welterweight World title in what is a big step up for both men.

Besputin, stablemate of three-division World Champion and pound-for-pound star Vasiliy Lomachenko, was an elite amateur at international level before turning pro in 2015 and earning his No.1 ranking with the WBA by racking up 12 straight wins.

Butaev, ranked No.2 at 147lbs by the WBA, shares an almost identical record as his compatriot and ‘The Python’, also based in the USA, will be aiming to take home the bragging rights as well as his first World title in what is set to be a barn burner.

“This is a long time coming for me,” said Besputin. “I know I belong with the best Welterweights, and November 30 is my opportunity to prove that. I’ve prepared for this fight my entire boxing life. I had over 300 fights as an amateur and fought the best fighters the world had to offer. I am used to traveling to fight the best, and I look forward to impressing the fans in Monaco.”

“I am excited and honoured to be fighting for a World title,” said Butaev. “This is a great opportunity for me, and I will make sure that I do everything to take advantage of it. I have been working towards this moment all of my career and finally it is my time to announce myself to the world.”

Vadim Kornilov, manager of Butaev, said: “Radzhab is a very special boxer, he has a lot of potential that has not yet been revealed in previous fights. I believe that this fight will really motivate him to open up and perform at his best!”

In the second World title bout of the night, Norway’s Cecilia Braekhus (35-0, 9 KOs) and Argentina’s Victoria Bustos (19-5) battle it out to become the number one Welterweight on the planet when they clash for the IBF, WBA, WBO, WBC and IBO crowns in a huge undisputed showdown.

“I’m very excited to fight on November 30 in Monte-Carlo and be part of the region’s rich history of compelling fights and extraordinary sporting events,” said Braekhus. “I’m sure that Victoria Bustos will provide a tough challenge but I have prepared well and look forward to putting on a great performance for my fans in attendance and those watching all over the world.”

“For me this is a new and huge opportunity to dispute the World titles against the champ Cecilia Braekhus, an opportunity which fills me with joy and happiness,” said Bustos. “To take up this challenge I have moved up one category, making a great job with my whole team. I am well prepared for this fight, I won’t let this chance pass, giving a great show and a great fight.

“This fight will be dedicated to all the boxing fans around the world who love this sport and support female boxing. I am thankful to everyone who always supports me, especially my family and my dad who is still present in my corner even though he is physically absent.”

China’s unbeaten Heavyweight star Zhilei Zhang (20-0, 16 KOs) returns to the ring to take on Russia’s Sergey Kuzmin (15-1, 11 KOs) in an explosive match-up. Zhang was last seen knocking out Don Haynesworth to claim the WBO Oriental title in September 2018 while Kuzmin tasted defeat for the first time in his pro career last time out at the hands of Michael Hunter.

“I’m very excited to be fighting in Monaco on the Matchroom Boxing card on November 30,” said Zhang. “It’s always been my dream to chase greatness and make the world aware that the Chinese Heavyweight is coming to do damage. I have been preparing and training hard for whoever they put in front of me. The Heavyweight division is wide open now and I’m here to make my presence known.”

“I’ve been telling the boxing world and media for several years that someday Zhilei Zhang will be in the World Heavyweight Championship mix, and I honestly believe he can win it,” said Zhang’s promoter Dino Duva of Roc Nation Sports. “But, first things first – on November 30, Zhilei needs to deliver the real goods against a world class Heavyweight like Sergey Kuzmin, and I believe he will do it in a way that opens everyone’s eyes.

“After that, his historic journey to the World Heavyweight Championship will be in full force. I want to thank my good friends and partners at Matchroom Boxing – Eddie Hearn, Frank Smith and the team for giving us this opportunity. I look forward to doing great things together for Zhang Zhilei in his quest for Heavyweight history.”

“This is an important event for me,” said Kuzmin. “I took this fight as soon as it was offered to me, I know that if I want to grow and become better, I have to fight the best. My opponent has an extensive amateur background and experience, he is sensitive, but no the quickest boxer. We have started training camp and are preparing hard to win this fight.”

“I’m delighted that Sergey will return to the ring this year,” said Andrey Ryabinski from World of Boxing. “This is great news for all of his fans and for Sergey as well! Yes, Sergey lost to Michael Hunter, he is a very good opponent, but this is boxing. Sergey has made certain conclusions and is preparing to come back to the ring right away. I think that all mistakes will be corrected. Sergey will return to his victorious route!”

Former World title challenger Hughie Fury (23-3, 13 KOs) aims to bounce back from his defeat to Alexander Povetkin and propel his name into the thriving Heavyweight scene. The 25-year-old has already mixed it with some of the biggest names in the division and will hope to end the year on a high as he targets more titles in 2020.

“I’m delighted to know I’ve got this date so soon after my last fight with Povetkin,” said Fury. “I feel I’ve much more to give and want to keep active and improving my game. Monaco holds a special place for me as I’ve more or less spent a lot of my younger years growing up there. My parents lived there and we have had many training camps there over the years, so it’s really nice to be fighting on such a high class show.

“The fans will see a hungry fighter, and no matter what adversity comes my way I will keep pressing as I know all of the fighters out there are not above me. It’s what I’m doing wrong myself. There are no excuses, I’m back and ready to achieve my main ambitions in life. I hope this opportunity will put me straight back in the mix for another top fight, and Eddie and my team will be the judge of that after my fight.”

Rising talent Joe Cordina (10-0, 7 KOs) is quickly establishing himself as one of the hottest prospects in British boxing and ‘The Welsh wizard’ will have to be at his best when he meets dangerous Mexican Enrico Tinoco (18-5-4, 13 KOs) for the WBA Continental Super-Featherweight title.

“I am grateful for this opportunity,” said Tinoco. “I have a great team behind me and we are training very hard. I am motivated and ready to capture the WBA title in a different weight class. I also would like to thank Matchroom Boxing, Joe Cordina and his team for taking this fight.

“Cordina is a great fighter with a tremendous amateur career. However, all that does not matter to me, I am going to Monaco to put on a Mexican style fight for all the fans and everyone watching on DAZN. I want to prove that my win against Jordan Gill wasn’t a one off. I know that winning this fight will put me in a position closer to my dream to fight for a World title.”

“I’m delighted to be back in the beautiful Monte-Carlo Casino for another year of World Championship Boxing,” said Eddie Hearn. “This is by far the strongest card we have bought to the principality with a brilliant 147lb matchup between Russia’s Alexander Besputin and Radzhab Butaev which can only be an all-out battle. The big boys battle it out when unbeaten Chinese Heavyweight Zhilei Zhangtakes on Russia’s Sergey Kuzmin and Britain’s Hughie Fury returns to action.

“Le Casino de Monte-Carlo and The Monte-Carlo Showdown are a perfect alliance,” affirms Mr. Pascal Camia, Executive Vice President, Gaming Operations. “Just as the exclusive events we host along the year which highlight the great art of gaming, the Monte-Carlo Boxing Showdown creates a unique experience in an iconic decor and as per the strategy of our Chairman and CEO, Mr. Jean-Luc Biamonti, gives energy and dynamism to all of our gaming rooms.”